What would be a plausible speed for a 22nd century military ship?

Conventional surface ships will likely continue to sail at around the same speeds as today, simply because the laws fo physics are not going to change. A wet navy monohull ship today is approaching the maximum possible hydrodynamic efficiency, and there are good reasons to suspect the monohull form will survive into the 22nd century, since it is well developed, has a considerable volume for equipment, fuel, and other consumables, is stable even in high seas and can provide persistence (the main reason to have a navy in the first place: the ship can remain on station for weeks or even months, something aircraft, orbiting spaceships or may other potential systems cannot do).

Looking for the ability to go faster would require firstly defining the parameters of how fast the ship should go, how long it can sustain flank speed and "why" it needs to go so fast? There are a number of ways to go about this.

Sustaining a modest increase in surface speed can be best done by minimizing the friction between a ship and the water. The ship can inject air or some sort of slippery polymer between the hull and the water in order to minimize friction. The amount of speed that you can gain might be limited, especially by the amount of energy needed to inject the "interface" fluid, and the amount of fluid carried if you are not using air. Research is ongoing today, and it is a relative to the Prairie/Masker system used to reduce noise on US Navy ships. 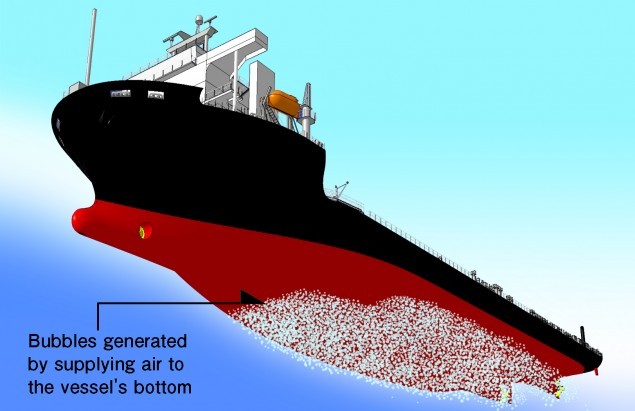 For higher speeds, we need to lift the hull from the water entirely. Hydrofoils, lifting bodies and surface effect systems use different means to do this. Hydrofoils are essentially wings, and lifting bodies are similar, but larger and likely more robust than foils, although the large size may result in lower potential top speeds. Lifting bodies also have the potential to lift larger displacement ships. 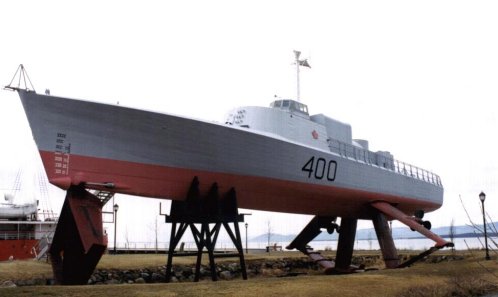 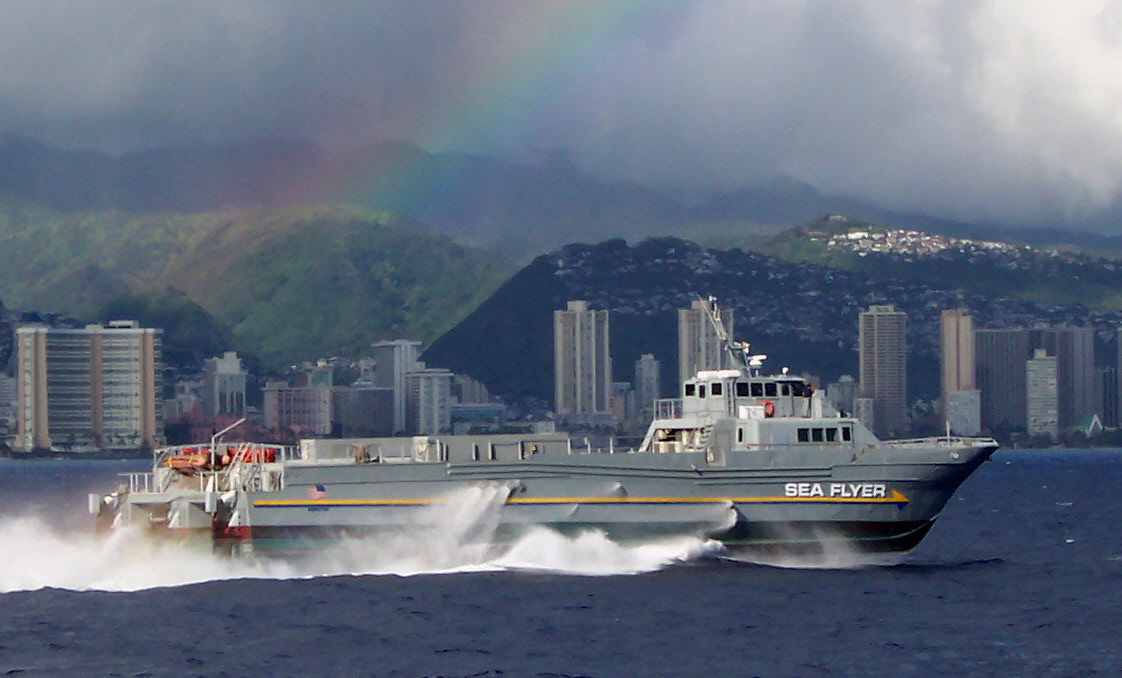 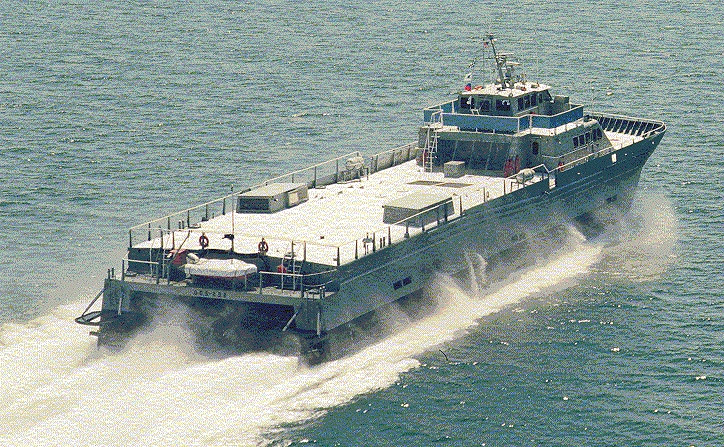 The SES series of test ships achieved speeds of 100 knots, so transit and dash speeds are very impressive, and when the air cushion is off, the ships can still remain on station like a conventional ship.

Beyond the 100 knot speed, we need to leave the water entirely, and are now in the realm of airplanes or Ground Effect Vehicles. One intermediate step is to use wings to partially lift a ship from the water, in effect inverting the idea of a hydrofoil (Aerodynamically Alleviated Marine Vehicle). This has not really been demonstrated to date. 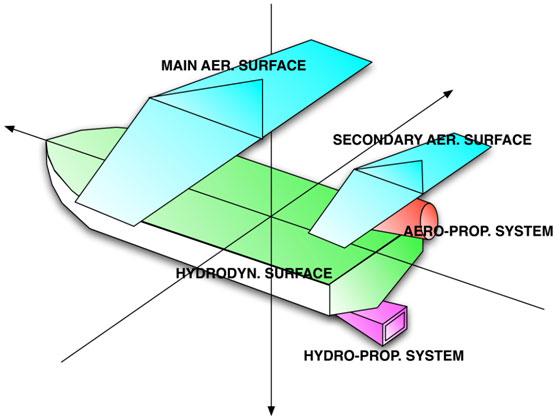 Of course, a true flying boat provides the ability to fly to deployments anywhere on the globe, and then land and float on water to provide persistent presence. The apogee of flying boat design is likely the Martin "Seamaster", a jet powered flying boat roughly the size and performance of a B-52. This should qualify as a true "boat" once at sea, and provides a high subsonic speed performance as well. 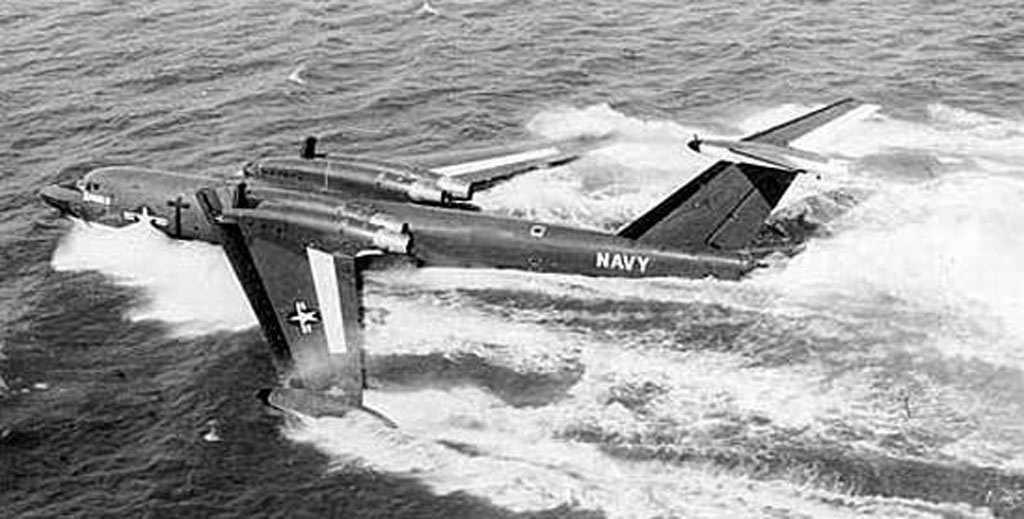 Martin Seamaster in the water

Amazingly, the Seamaster is an amphibian!

I would suspect that by the 22nd century, most wet navy vessels would actually be some form of flying boat, to make the force as versatile and rapidly mobile as possible. 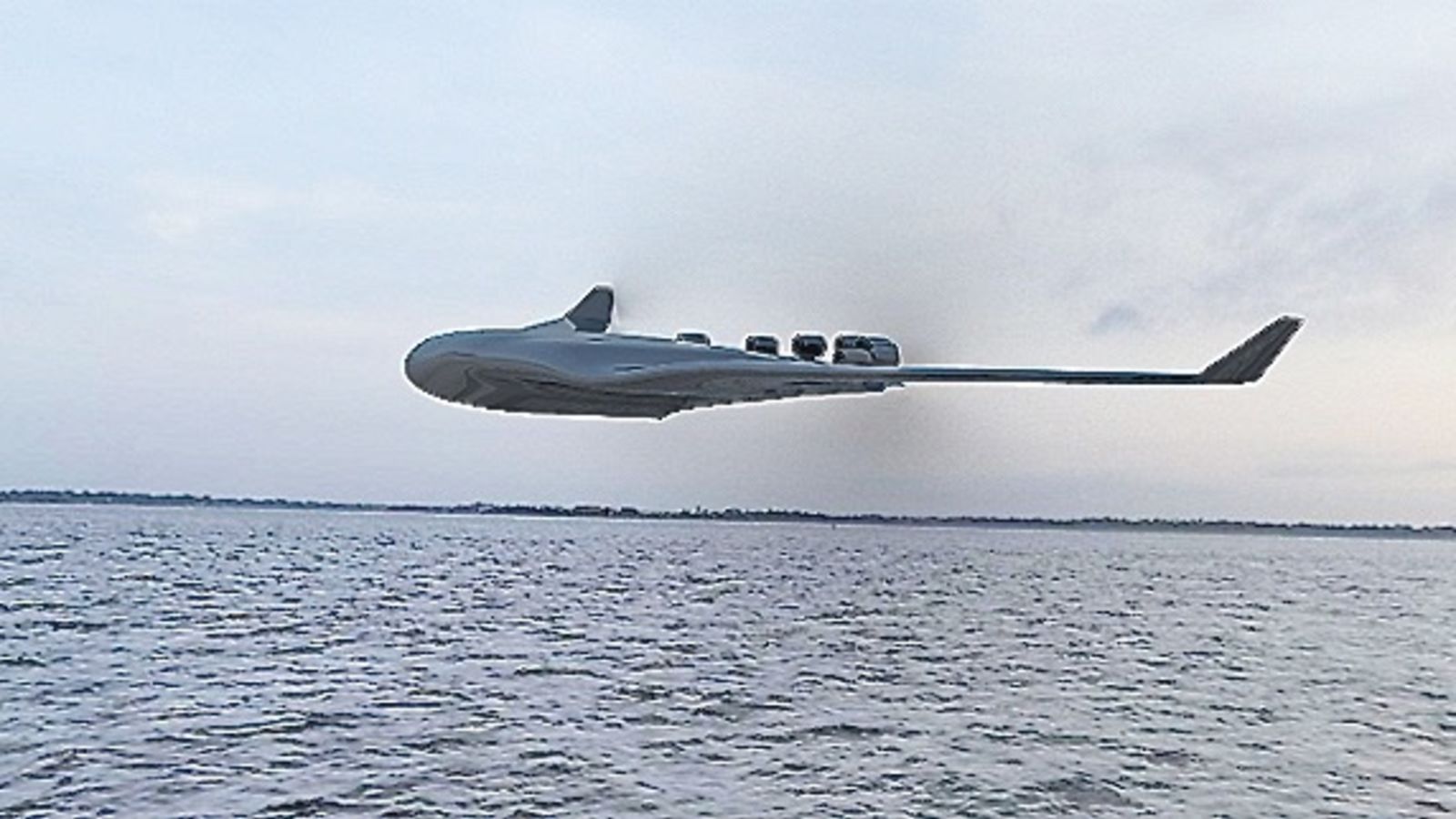 If you look at the last 200 years, the top speed seems to have levelled off because aircraft (manned, unmanned, or missile) will be faster than watercraft, so trying to win the sprint race is pointless. Watercraft excel in range and endurance, not speed.

There are several things to keep in mind regarding destroyer speeds. There is the difference between trial speed on the measured mile and top speed on the open ocean, plus possibly for modern craft military secrecy. (For decades the US Navy declared that their subs did more than 20 knots. True, but they did much more than 20 knots.)

But the tendency is clear. Destroyer speed has stopped to rise. 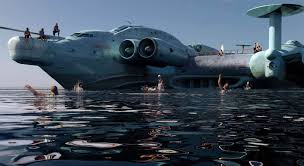 Some manned and unmanned prototypes were built, ranging up to eight tons in displacement. This led to the development of a 550-ton military ekranoplan of 92 m (302 ft) length. The craft was dubbed the Caspian Sea Monster by U.S. intelligence experts, after a huge, unknown craft was spotted on satellite reconnaissance photos of the Caspian Sea area in the 1960s. With its short wings, it looked airplane-like in planform, but would obviously be incapable of flight.[5] Although it was designed to travel a maximum of 3 m (9.8 ft) above the sea, it was found to be most efficient at 20 m (66 ft), reaching a top speed of 300–400 kn (560–740 km/h; 350–460 mph) in research flights.

740 km/hr is good and fast and is only a little less fast than a modern passenger jet. That was 1960. Your future can be the past: a destroyer size ekranoplan made of titanium and carbon fiber with an aircraft like drive system moving it at 1000 km/hr.

using Supercavitation you can remove most of the friction from travelling through water. This seems to be designed much more to work with submarines, but I have seen designs to apply it to the front of cargo ships to reduce fuel consumption.

From the Wiki page:

The submarine's designer, Electric Boat, is working on a one-quarter scale model for sea trials off the coast of Rhode Island. If the trials are successful, Electric Boat will begin production on a full scale 100-foot submarine. Currently, the Navy's fastest submarine can only travel at 25 to 30 knots while submerged. But if everything goes according to plan, the Underwater Express will speed along at 100 knots, allowing the delivery of men and materiel faster than ever."[14]

EDIT: I found a surface ship project working on this concept, Ghost, the capabilities don't seem to be public, but rumoured to be capable of around 100knots,

“We’re basically riding on two supercavitating torpedoes. And we’ve put a boat on top of it,”

Scaling this up to destroyer size would probably be very difficult, but you have plenty of time to work it out for 22nd century

After invention and successful miniaturization of fusion plants 100 years into the future ships will just fly. They will anchor and refuel on water (there is a lot of deuteruim in oceans). but will fly to move. There would be little reason to move in water when everything they have can be put in air because of very light and cheap energy generation. As not really aerodynamic they will be able to easily reach 900 km/h and probably be able to go faster than the speed of sound for short amount of time. Computers will be faster and will be able to correct all pilot errors.

Just look at "Back into the Future". They installed a fusion power plant instead of the main engine and made the car fly.

The most significant speed limiter of a boat hull through water is frictional drag. That is the result of wetting properties and adhesion forces at the hull/water boundary. As nano-scale material science progresses it's plausible that physical nano-scale structures could be applied to the surface of ship hulls that greatly limit the ability of water to wet and thus adhere to them making them effectively friction-less. This would have an effect similar to supercavitation without the additional complexity, and it should be noted that since the 1970s there have existed supercavitating torpedoes that can exceed 200 knots underwater. For ships, the limiting factors at that point would be aerodynamics and the system of propulsion (the torpedoes are propelled by solid rocket engines). Turbo fans would be a natural choice.

Since a ship can be made from different materials that would affect their ability to interact with the water. a lighter weight vessel should go faster. Consider the concept of a hydrofoil craft that today achieves fifty knots with a sail and the use of a magnetic hydro dynamic engine. By the 22nd century the addition of gravity manipulation might allow a sizable ship to achieve over one hundred and fifty knots

If civilization continues on as it currently is, warships would become pointless*. There would be no adequate power source, as fossil fuels will be exhausted and nuclear would be unacceptable (per the "current course" requirement). Furthermore, small drone missiles would easily destroy them.

*Even today, their only real use (other than nuclear submarines) seems to be aircraft carriers, and that in instances where the opposing force does not have practical capacity to reach the carrier. Otherwise they tend to be sitting ducks. See for instance the sinking of the General Belgrano in the Falklands war.

Not the answer you're looking for? Browse other questions tagged near-future engineering travel ships or ask your own question.

13
People of the Sea- Living on a Migratory Fleet
6
What would ancient Horn-of-Africa sailors eat on ship?
4
Data Storage and Access during a Slow Apocalypse
2
Foot roads and separation of groups
12
How would a sailing ship travel on land?
7
Realistic hovering mechanism for my sci-fi drone
5
How many crewmen and what type of ship are needed for medieval arctic travel?
6
Fantasy Sailing Ship with Oars Speed and Plausibility