A secret base is built on Mars: is it noticed?

A secret society of inventors has been hiding for years. Finally, they have designed their Mars base in the year 2019! Unfortunately, they "borrowed" most of their supplies. If they were to build a glass survival dome say, 200 meters in length, would NASA or any of the other space agencies be able to find it in the next few years?

Assuming that no Martian rovers or anything come across the dome, would satellites or telescopes notice the domes, and how long until they do?

A good answer by L.Dutch regarding sensor resolution, but remember that people knew where to look for the rover.

There are good chances that pictures would be taken and fed to an automated analysis system, which would not be programmed to spot domes. Scientists might not look at the data as it comes in, until some grad student tries to analyse weathering patterns or whatever years later.

Perhaps the data would be fed into a public database. Some random guy running a flight simulator on Mars might spot it.

Follow-up, years later: Consider the Utah Monolith. Apparently placed in the wilderness by a prankster, it stood there for four years before it was noticed in the existing data. Once someone spotted it, the old data was re-analyzed.

The rover Curiosity, way smaller than 200 m, can be seen from Martian orbit: 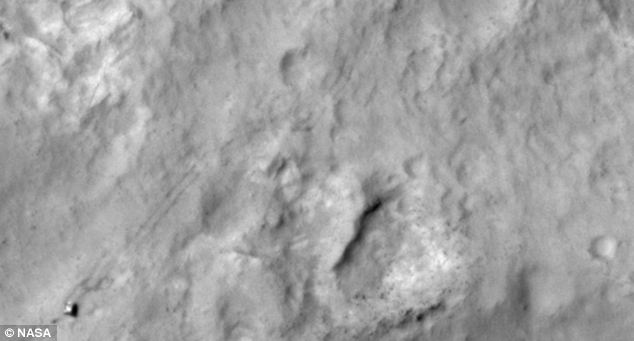 So, for a martian satellite in polar orbit it would be just a matter of days before capturing visual proof of the presence of "something" that big on the surface. If instead its orbit wasn't polar, and the dome was built in a suitable location, it could go unnoticed.

For Earth based telescopes the task is harder, and they cannot spot anything of that size.

So, maybe an "incident" can take care of the martian satellites before the building work starts...

No need to look for the base

It's not really possible to sneak anything to Mars in the first place. Any rocket launched on the secret will be tracked by thousands of telescopes, missile defense radars, satellites, and other sensors, and from there it will be tracked no matter where it goes. The mystery and the uncommon nature of such a large rocket heading to Mars would make it the most observed object in the Solar System.

If you somehow get over that hurdle, your secret society can simply dig underground. This is a pragmatic option as well, since it provides shielding from radiation and insulation from temperature extremes, and allows constructing a living space with far less materials than would be needed otherwise. And once satellites inevitably take pictures of the spot and someone at NASA notices, they'll simply see a disturbance where the entrance is, rather than a greatly obvious man-made structure. With a bit of clever concealment, the entrance could even be made to blend in with the environment from above and make discovery through satellite photos alone nearly impossible.

They find them all the time.

An alien dome and a pyramid on Mars or just rocks? Nasa satellite spots two mystery objects on the red planet sending conspiracy theorists into a frenzy. 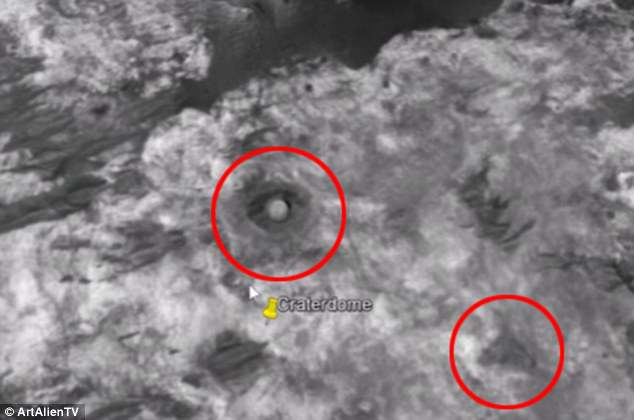 In the description for the video, ArtAlienTV wrote: 'We have a clear 50 foot dome or sphere in a Mars Crater with large pipes coming out of it on the left.

'Also, a triangular pyramid shaped structure about 500 feet away from it that is 120 ft wide.'

He added: 'These features look artificial in nature and are clearly visible on Google Mars with no enhancements.

'The structures are between the Mawrth Vallis region and Oyama Crater in an area that was short listed for a Mars Rover to explore for possible signs of life before Gale Crater was eventually chosen.

Spotting a dome - sure. Recognizing it as an artificial construct - maybe not.

Mars is a big place. If nobody is looking, it's unlikely anyone will find it.

The reality is that the surface of mars has largely been mapped topologically, so nobody is likely to run a radar scan to map it again any time soon, and even if they did, nobody is going to go over every mile of it looking for unusually regular shapes like domes.

It's very possible the dome would be faithfully reproduced in imagery and radar mapping by a satellite passing overhead and nobody will notice.

If they did tell a computer to scan through the data looking for hallmarks of artificial structures, it's likely they'd get a lot of false-positives too, there are a lot of big rocks, hills and in some places dunes.

The fact is that if NASA realises there's definitely a base and has any idea what to look for, they'll find it in a few days if they've previously gathered the data, or a few weeks if they haven't.

But in the normal course of things, unless you've been foolish enough to put the dome near any sort of obvious landmark or in the middle of one of the big-name valleys then it's highly unlikely to be found.

it would be easier to provide radiation-shielding. thermal insulation if the enclosure were built sub-surface. also easier to camouflage the installation. best of all to make an excavation large enough to facilitate sub-surface mining, especially for water-drilling.

some facility would have to be devised to excavate & distribute any mineral debris in a non-detectable way. but that would be the case wherever the enclosure is located.

there is going to be a need for access to sub-surface water in any case.

Why does the base have to be visible from above? They could simply use a cave in a mountain (and get radiation shielding) or at the side of a cliff/canyon or build their base inside a large natural cavity under the dry ice (solid carbon dioxide) of the polar cap like Zygote in Red Mars.

Build it underground. There's a large system of underground caves. Add radiation shielding, and they can use ice for water. This way, nothing can detect the base. They would take care of the satellites via bombs. Then, when they need to go above ground to harvest ice and sub-surface water, they would use camouflage cloaks to conceal themselves.

Not the answer you're looking for? Browse other questions tagged science-based space secret-society .

8
Can a 15km, rapidly-spining asteroid go undiscovered until the asteroid belt is being actively explored?

13
What is the soonest we could possibly have a self-sufficient base on Mars?
3
How might a lost alien re-connect to a hidden secret base
3
How to cool an underground secret base?
47
Is this alternate history plausible? (Hard Sci-Fi, Realistic History)
4
If we built a large moon close to Mars, could we make Mars a living world?
0
Are amnesiatic drugs the most effective way for a secret organization to remain secret if they get found out?
34
How can a secret, murderous cult remain secret?
10
What would realistically be the secret base for someone who can teleport?
5
Estimating thrust and kg fuel for a generation ship's journey to Alpha Centauri
6
Where would be the most likely location for an early Mars base?