As a prosthesis crafter things are going really bad with the new trend of healers regrowing wounded limbs.

Apparently for some sick reason people actually prefer their body parts to be made of real flesh and not of some cool and stronger materials powered by magic runes.

How do I keep selling my prosthesis and avoid going bankrupt?

The magic system: Runes power the limb making it possible for the user to control it just by thinking, the limbs are as powerful as the rune. But even the cheapest runes are quite powerful and they can be stacked into slots. 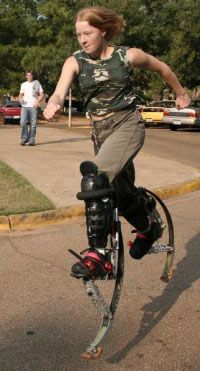 The healers can only restore what biology created. You can do better than biology. Your magic augmentations fit over, in, around and through the native parts improving their function and providing new functions never before dreamed of. Run faster. Throw farther. Be better!

It goes without saying that most of your customers are sex workers.

Those people who've lost a limb know how much an injury or infection hurts. Your prothesis cannot hurt, but works just like a natural limb.

This can be of advantage in physically straining and dangerous jobs like mining, lumbering, fishing or for mercenaries.

If Joe lost his leg due to his axe slipping once, how high are the chances the axe will slip a second time? If Joe cannot pull a full fishing net into the boat anymore because his hands are afflicted by arthritis and rheumatism, how much will he want a magical prothesis that doesn't hurt anymore?

For many of those I know who have lost their limbs, what they really want is to feel normal again. Not to be more-powerful, not to be better warriors but to just feel their loved one's touch or dance with their own two legs at their daughters wedding. These people are not going to be your target market - and the first thing you can do is wish them well and focus on the advantages of your product:

Powerful resurrection and restoration spells may require such expensive ingredients as diamonds or rare, hard to get herbs to complete. If I was selling that product, and needed to "make a living", I'd have to charge over the high cost of the ingredients. So not everyone is going to be able to afford these magical specialist so there will be a market for your type of prosthetic. Especially if you can develop some low cost, functional, models which allow people to simply get back to their lives.

In FFVII, one of the characters on the party has a gun attached to his arm (despite being able to get an actual prosthetic) because he wants it as a reminder and way of getting justice. In Neverwinter, their is a gnome with two magical pickaxes attached where his arms once were. People such as this, those who need a super functional augmentation that lets them work faster and better, those who have learned a lesson about combat and want to go back stronger to better protect the ones they love, or even those seeking revenge. Those whose goals are not simply to be normal again - these are the type of people who will seek you out and who you should cater to.

This also works with cost as a miner who loses their arm in an accident will have to consider having his normal arm back vs. a magical pickax which will double his work output...if it is the same cost that miner will have a definite decision to make.

Sponsor a few of the best adventurers you find with your prosthetic, as long as they are willing to wear your logo or tell people how they used your enchanted granite arm to save their party from certain doom. If there are arenas in the area, sponsor some of the talent fighters who bit off more than they could chew or had potential so they can compete again. If these teams do well it would be great advertising in its own right.

If you can make these fashionable, make a few less functional (at least not meant for fighting) forms which focus on beauty and it could appeal to people over the magical regrowth option.

If you can make it fashionable, this could also allow you to diversify your product by moving some of your resources to making coverings like your prosthetic, growing crystals which cover the arm or still growing wood and flowers which support weight but don't add to run speed being changed into sleeves which cover and hide your arms and legs, which would appeal to all groups. Those not needing prosthetic would wear the sleeves while those needing the prosthetic would have some options to switch out for formal or just social events.