Can an ion drive cause an aurora?

In near future a large spaceship is built. It is nuclear powered, has a crew of two dozen, and is propelled by an advanced ion drive like VASIMR.

The Variable Specific Impulse Magnetoplasma Rocket (VASIMR) is an electromagnetic thruster under development for possible use in spacecraft propulsion. It uses radio waves to ionize and heat a propellant. Then a magnetic field accelerates the resulting plasma to generate thrust (plasma propulsion engine). It is one of several types of spacecraft electric propulsion systems.

The ship departs to Mars from Low Earth orbit.

Will the engine exhaust cause an aurora?

Technically yes, in practice no.

Most auroras occur between 90 and 130 km above ground level, though some occur hundreds of kilometers high. Source

NASA considers Low Earth Orbit to be between 160 km and 1000 km above ground, so you have sufficient overlap to be safe in that respect.

The exact mechanisms that make auroras possible are still under investigation. A general idea is that the sun is constantly emitting charged particles (mostly electrons) in all directions, and many of these get trapped above the Earth's atmosphere in what's called the magnetosphere.

The size of the magnetosphere depends on the relative strengths of the solar wind and the Earth's magnetic fields. When the solar winds rapidly increase in strength it contracts and you can observe the consequence of an onslaught of charged particles being flung into the Earth's atmosphere.

This is typically observable at the poles where the magnetic fields are the strongest and attract the charged particles most strongly.

Because of this, auroras are massive. 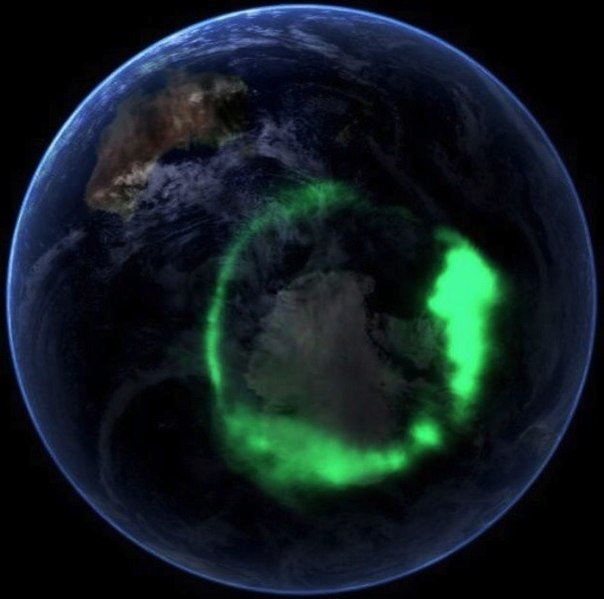 See a beautiful animated version of this image here

As you can now imagine, the sheer scale of the event is absolutely massive and caused by forces that no spaceship will even need.

So, yes, an ion drive which emits plasma will cause the atmospheric particles surrounding the thruster to gain energy and release it in the form of photons and cause a light display much in the same way that the particles trapped in the magnetosphere do.

However there would not be any sustained excitation of the atmosphere, and so instead of generating an aurora that covers the sky, the space-ship would leave a quickly fading, much smaller trail of lights reminiscent of the lights of an aurora.

7
Under what circumstances would it be possible to harvest aurora for either energy or matter?
7
Is the Alcubierre Drive relatively free from relativistic collisions?
1
Is it possible for an alien race to create an aurora?
8
Problems When Disguising A Spaceship As An Airplane?
2
Is it worth having artificial gravity by propulsion, in orbit or in “free space”?
6
Escaping a blackhole with an Alcubierre drive?
0
Can someone with a better understanding of physics review or correct my design of a hypothetical fusion reactor for space vessels?
4
Atmospheric Reactionless Drive Ships