As far as I know airships, specifically rigid-airships, do not have an upper size limit other than what is required by practicality and how willing you are to build gigantic airship sheds. But one question that has been burning inside me recently is how small can an airship, specifically a non rigid airship or blimp, feasibly be and still fly.

I know there is a minimum amount of lifting gas needed but I have never received a straight answer. In the real world, the smallest airship that I know of is Gallagher's airship the White Dwarf. It is about 48 feet long and 17 feet wide with a 17 foot long gondola and 6200 cubic feet of lifting gas capable of lifting almost 400 pounds. The airship is pedal powered so It can't go fast, but in an article I read on Google books it managed to reach 1200 feet in the air.

Granted, the blimp had been caught by the wind which made it rise to that height but the blimp managed to maintain the height for a few minutes before descending. With the White Dwarf as a reference, what do you think the smallest possible airship (envelope) size is for personal travel? Assume that it is powered by a lightweight magnesium aluminium motor, like that of a motorcycle (light enough to be carried by the average guy), has a 5-7 foot long gondola made from a magnesium aluminium alloy, has a traditional cigar, football, or teardrop shaped envelope, and has enough lifting gas to lift someone off the ground and achieve a maximum Height of 300 to 650 feet using either hydrogen, helium, or hot air.

Let's assume that you're using helium as your lifting gas.

Let's further assume that you want a craft that can lift an average human of around 80 kg, and we allow for 40 Kg of gas bag and framing. For that, you'll likely only get a small frame to sit in not terribly dissimilar to that of a hang glider, and that's only if your gas balloon is very lightweight (therefore not combat ready). You may also want a simple pedal driven propellor of sorts, but let's continue to assume you can fit all that in your 40 kg additional weight.

That means that your airship has to have a gas bladder on it of approx. 120 m3, or roughly 3 m x 4 m x 10 m in size. You could put your airframe for holding you under that, and you'd be good to go.

This has already been done in real life... 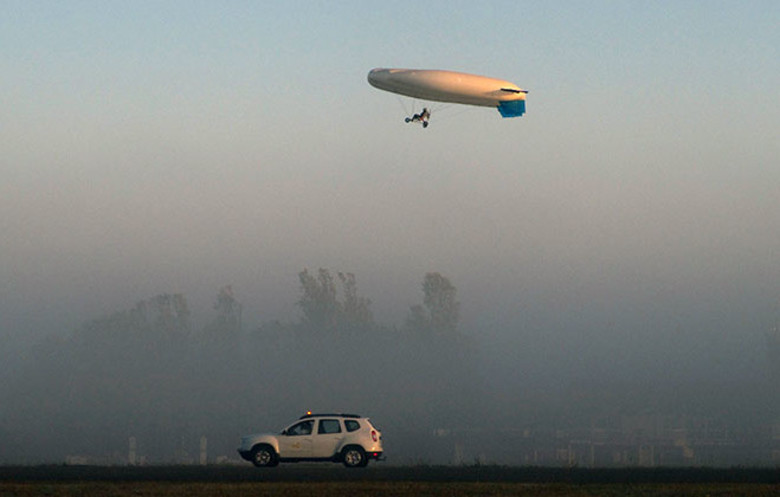 There is an airship that was created in 2016 called the Voliris that got the envelope down to a little over 80m3 in size, pretty much doing exactly this. I'm not sure what gas they used in this airship, or what its payload capacity was, but the picture pretty much tells it all. This is a good example of the concept I was articulating, and it's a real world one as well.

Lawnchair Larry's setup has to be close to minimum size. He and his girlfriend attached 45 eight-foot weather balloons filled with helium to his lawn chair, and he set off. He did carry a pellet gun to reduce lift for a controlled landing, and put holes in enough balloons before dropping it.

Each balloon had about seven and a quarter cubic meters of helium, giving a total volume of somewhere like 325 cubic meters. It sufficed to get Larry up to 16000 feet. An actual airship would have a slightly more sturdy gondola, and some means of propulsion.

By stretching your definition of "Airship" - you could use a Paramotor, which is basically a fan-mounted backpack used to give parachutists a little directional ability. If we take one of those, and replace the parachute with a helium balloon, we might be getting somewhere.

Wikipedia gives us a lower weight boundary for paramotors of 18kg, or 40lbs, which I assume would be a smaller model, probably with an aluminium frame. Combine that with an average pilot weight of ~80kg, and you have a combined weight of 98kg, or 216lbs.

Going with Tim B II's figure of 1m3 per kilogram, that gives us a minimum envelope size of 100m3 for neutral buoyancy. More will be required to counteract the weight of the envelope itself, and whatever the pilot had for breakfast that morning.

This is definitely stretching the definition of an "Airship" - it's one guy wearing a fan backpack, dangling beneath a giant balloon. But it is the absolute minimum configuration I could think that would satisfy your requirements.

Gallagher's White Dwarf was built by the best (Bill Watson of the Gossamer Albatross team -- in 1984) with 150 lb dry weight. Alberto Santos Dumont did much the same circa 1900, but with Hydrogen to compensate for lack of modern materials. 4000 cu ft of Hydrogen gas should be enough to get a pedal powered airship aloft.

As big as an ultralight or helicopter, but it'll be more ultralight/helicopter than airship.

There are airahips that are heavier than their lifting gas would allow them to fly. To still fly these Airships use lifting surfaces like an airplane (so they need to keep moving forwards to fly) or rotors like a helicopter that provide the remaining lift. An ultralight aircraft that replaces a portion of its lift surfaces with gas lifting could be considered enough of an airship and be the smallest airship available. The shape of these craft can be altered to fit within the parameters given and due to a portion of the lift being generated by other means the size will be smaller than previous answers.

Scale up until you reach your satisfied size for calling it an airship or reach the size of the answers already given.

Not the answer you're looking for? Browse other questions tagged engineering airships .