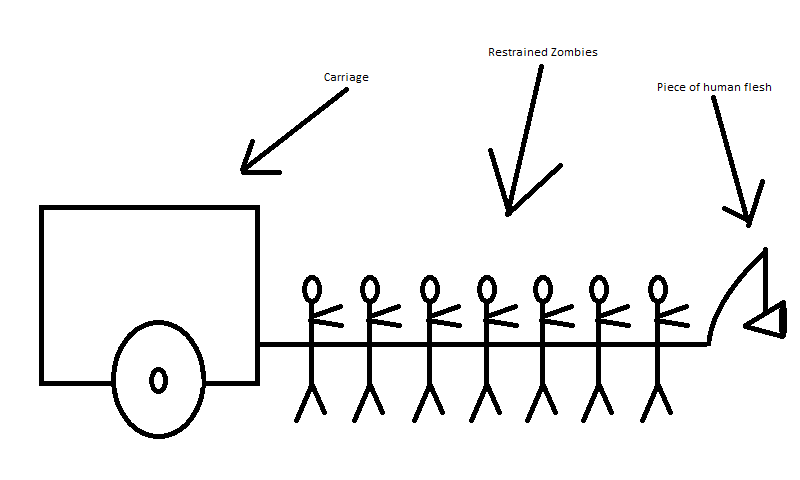 This carriage was devised by Vitrivius as a way to make good use of the Zombies discovered in Roman territory.

How many zombies would be needed to allow this carriage to transport 1 ton of supplies at 15km/h ? Knowing that zombies cannot be killed by ordinary means, how hard would it be to transform this into war machines carrying onagers/ballistas etc, into battlefield ?

I think rolling resistance is going to be the main resistance force here. I don't know what the coefficient is for a wooden carriage on Roman roads, but I think the worst case would be something like car tires on sand. So, for one short ton load the rolling resistance would be about 2670 newtons. There will also be some minor wind resistance, perhaps 200 newtons. An average human can comfortably tow at about 250 newtons, so we'll assume the same for a zombie. The sprinting speed while pulling that load is unknown. I'll assume it's half. That means you'll need a team of 24 zombies to pull this cart. Might want to add a few more depending on how well they're harnessed.

They're better than horses

Zombies don't spook as easily as horses, they are very well summed up when described as single-minded. They can't be killed as easily and zombies are often literally used as fodder. If you put some blinders on them to keep them focused on the meat-lead, they may be fairly effective as wartime beasts of burden.

Focus on this part:

Knowing that zombies cannot be killed by ordinary means, how hard would it be to transform this into war machines carrying onagers/ballistras etc, into battlefield ?

I guess as a conclusion...the free labor seems attractive, but it comes with a lot of risks from not being able to control them when the artillery they are pulling around needs to stop and be used, to them getting loose and rampaging on your army during the middle of battle.

If you really want to be creative...whats stopping an army from loading up zombies into the catapults and using them as ammo in a siege? Dead cows were often launched to spread disease...I'd imagine a zombie being hurled over a wall and into a town would be that much more effective (and potentially a bit funny to watch fly)

We can safely assume that a regular person can pull between 75 and 100 lb, but I lack the time or skill to do the math required to figure out how many it would take to pull at 15 mph. You should consider that the zombies will at most probably be walking at a normal rate of 3.1 mph, making it difficult to reach these speeds. I would also have to factor in the rate of decay of the dead (do they decay?).

Simply divide 2000 ponds by 75 and you get.....26 average zombie people to move it. Add a dozen more and you have it going at a decent speed. Also keep in mind that the harness will eventually rip through the decaying flesh.

how hard would it be to transform this into war machines carrying onagers/ballistas etc, into battlefield?

Having them lug crap around would be inefficient. They would abandon the small parcel of meat being used at bait as soon as one of your guys came within eye sight of it. If they were in eyesight of the enemy army they would keep going and try to charge the enemy army, bringing your weapons with them.

Instead, simply withdraw your living army and release them into the enemy camp in large numbers. They will scatter and flee when they realize your weapon is the undead.

I do not believe this is a viable means of transport. Blinders would keep zombies from seeing all the tasty morsels around but zombies have a human sense of some kind, it wouldn't work. If you are going to make a zombie transport I think you want something along the lines of a hamster cage except that it's fully enclosed other than to the front. The only path to the morsels the zombie has is forward--which actually just turns the hamster cage.

You also need your zombies fully confined or you're going to have total chaos on the battlefield.

Not the answer you're looking for? Browse other questions tagged alternate-history ancient-history zombies or ask your own question.

26
Zombie perpetual motion machines
16
Behaviour of Roman army versus zombie horde
9
Anti-zombie warrior squad
43
Zombie army is bad idea. But why actually?
31
How do the zombies win when they're so weak?
3
How do I make a new and interesting type of “Zombie” creature?
8
How can a planet full of zombies reproduce and maintain its population?
26
Defending Castle from Zombies