Lo and behold! A zombie apocalypse broke out inside Roman territory. In the Iberia peninsula. Being smart as vitruvius is, he devised a plan on how to deal with the zombies. Use them as power sources! 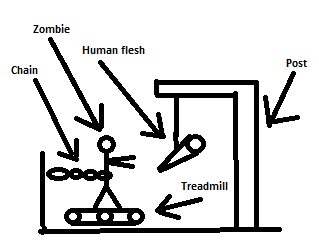 Provided everything worked ok, what's the maximum power that can be extracted from this setup? Is there an alternative means to extract power from zombies? Would this provide enough power to move a war machine?

We have the data for humans on treadmills, so the assumption is that the maximum power for a zombie is the same. They were once humans, right?

You might shave off a few tens of watts due to the shuffling nature of their gait. But at least the power generation is more constant for a zombie, humans get tired too quickly.

You'd be much better off teaching one of them to ride a bike. Or maybe that's one of those things zombies never forget either? In any case, the maximum for a bike is closer to 400 Watts. Just don't let them escape after that, we don't need any zombies riding bikes around after people.

Would this provide enough power to move a war machine ?

Do catapults and chariots count? They can pull from a catapult until it's set up in place. And if they can pull chariots at 30 km/h, even if that's not much, they can pull longer and farther than horses.

What about mobile fortresses? 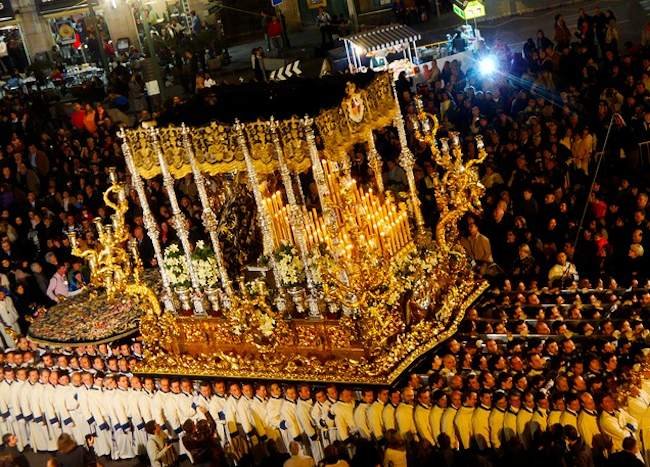 Pack your horde of zombies tight, add some helmets to protect their fragile heads and make them carry archers and supplies through the battle field.

A typical human can produce and sustain between 50 and 150 Watts walking, or as high as 400 Watts on a bicycle. However, that is for long-term, sustained output; since these zombies essentially never get tired, they actually can produce a lot more power. By setting the treadmill at an incline, stepping up the gears, and adding hand/footholds for the zombie to use as leverage, the zombies should be able to attain peak energy production of a human, around 2000 Watts, or 2.68 HP. As a plus, higher gear ratios means that zombies won't run; this leverages strength, not speed.

Wear-and-tear will play a role over time, but as long as you have reserve zombies to replace those that fall apart, you should be able to power whatever you want. Romans already had several slave-powered devices, and zombies are much cheaper than slaves, not to mention easy to store: dump them in a sealed bucket of oil, and they'll last forever!

If you have enough of them it may be good enough to power the electric fence that you use to keep the zombies at bay.

61
Safe way to eat zombies?
29
A Treasure Chest for your Post-apocalyptic Children
16
What production of power would be most efficient in a zombie apocalypse?
8
How do I build a wall to repel World War Z's fast zombies?
12
Zombie perpetual machines - logistics