Could the TRAPPIST-1 planets have moons?

The TRAPPIST-1 planets are all very close to each other and thus are subjected to strong gravitational forces amongst each other and to the red dwarf they're orbiting. Would it be possible for them to have moons (most likely in a low orbit)? To clarify, I'm not necessarily talking about big moons like our moon but more like Phobos and Deimos.

I quote from that obscure and little known source on TRAPPIST-1, Wikipedia:

Stephen R. Kane, writing in The Astrophysical Journal Letters, notes that TRAPPIST-1 planets are unlikely to have large moons.[62][63] The Earth's Moon has a radius 27% that of Earth, so its area (and its transit depth) is 7.4% that of Earth, which would likely have been noted in the transit study if present. Smaller moons of 200â€“300 km (120â€“190 mi) radius would likely not have been detected.

At a theoretical level, Kane found that moons around the inner TRAPPIST-1 planets would need to be extraordinarily dense to be even theoretically possible. This is based on a comparison of the Hill sphere, which marks the outer limit of a moon's possible orbit by defining the region of space in which a planet's gravity is stronger than the tidal force of its star, and the Roche limit, which represents the smallest distance at which a moon can orbit before the planet's tides exceed its own gravity and pull it apart. These constraints do not rule out the presence of ring systems (where particles are held together by chemical rather than gravitational forces). The mathematical derivation is as follows:

So at the present it is believed that large moons like Luna would probably already have been detected in the TRAPPIST-1 system, and that it is theoretically improbable for planets so close together to retain any moons they might have for a long time.

It is unknown whether having large moons is necessary for a planet to be habitable and have life.

In the case of planets orbiting so close together as those in the TRAPPIST-1 system it is possible that they might serve to stabilize each others axial tilts and provided tides and that those effects might be just as good as having large moons.

The system is very flat and compact. All seven of TRAPPIST-1's planets orbit much closer than Mercury orbits the Sun. Except for TRAPPIST-1b, they orbit farther than the Galilean satellites do around Jupiter,[41] but closer than most of the other moons of Jupiter. The distance between the orbits of TRAPPIST-1b and TRAPPIST-1c is only 1.6 times the distance between the Earth and the Moon. The planets should appear prominently in each other's skies, in some cases appearing several times larger than the Moon appears from Earth.[40] A year on the closest planet passes in only 1.5 Earth days, while the seventh planet's year passes in only 18.8 days.[37][33]

The planets should appear as visible discs in each other's skies quite often, thus fill the visual aspects of moons quite nicely.

M. A. Golding's answer is correct, I think, but it's also a bit incomplete, because the exoplanets in the TRAPPIST-1 system are not equally unsuitable for hosting exomoons. In particular, their individual orbital radii (as well as masses and compositions) play an important role in determining what sorts of moons they could retain over long timescales, and some are more favorable choices than others. While the inner exoplanets are unlikely to keep their moons, the outer ones may still have some hope.

An analysis of the possibilities of exomoons in the TRAPPIST-1 system was done by Kane 2017. He looked at two characteristic length scales for each planet, defined from its center: the Hill radius and the Roche limit. Outside the Hill radius, the star will eventually dominate the motion of any satellite and send it into an orbit around the star, while inside the Roche limit, a moon would be torn apart by the planet's tidal forces. There is, therefore, a delicate balance, especially in compact systems like TRAPPIST-1.

For all of the exoplanets, the Hill radius is at least twice the Roche limit for reasonable compositions, increasing to about ten times the Roche limit for the furthest planet from the star, TRAPPIST-1 h. In general, the greater the distance to the star, the greater the range of possible densities for a moon orbiting a planet. Kane produce a graph of the regions of stability (Fig. 2). The light grey shading shows the habitable zone, while the dark grey shading shows regions that might be within the habitable zone. The two curves are for two different values of a certain parameter related to the Hill radius; above each one is a region of stability: 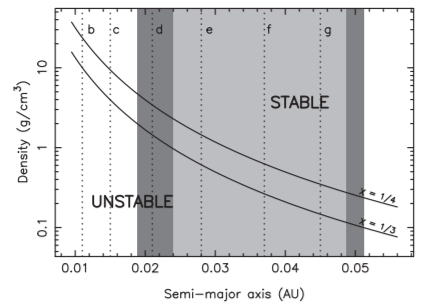 For comparison, the density of the Moon is about 3.3 grams per cubic centimeter; Earth comes in at around 5.5. This means it's unlikely that the inner two planets could host moons, but the outer five could. The problem, as Kane points out, is that we should expect any moons that formed to have low densities. As I wrote in a recent answer, the planets likely migrated from further out in the system, moving inwards. Any putative moons would probably have formed in the outer reaches, where there was more low-density materials, making high-density moons unlikely.

That's not to say that higher-density moons are impossible; it's also possible that small moons formed in the protoplanetary disk during the migration process, and were captured by the exoplanets in three-body interactions. It is, though, a bit less likely. Assuming the moons were indeed in place orbiting the planets at some point, though, simulations by Allen et al. 2018 indicates that they could remain in stable orbits for long periods of time. In other words, if you can solve the formation problem (or, heck, just plop the moons in there), then maybe half of the planets in the system could retain moons after all.

... I missed my chance. Those guys just said everything. The only thing i could add is that only the outer 3ish planets even have a chance of having a moon, and if you were hoping for a hospitable moon, you're out of luck. They would be too dense and far from the star. Also, due to the roche limit and tidal locking(ohhh boy) the innermost 4 planets... no moon.

5
How does the n-body-problem affect a star system around a red dwarf?

116
How would having multiple moons affect tides?
14
Do the moons of Mars have enough gravity to colonize?
10
Would it be possible for an Earth-like planet to have multiple moons with diverse biomes capable of supporting life?
10
How would this tidally locked planet be affected by its moon and would the moon have a deaccelerated orbit?
3
Is it possible for a planet to have three moons?
2
The major effects on the habitability of exomoons orbiting this Brown Dwarf
6
Could a planet with many moons see a different moon each night?
4
Logistics of habitable moons orbiting a brown dwarf
4
What is the minimum size of an habitable planet to have two moons?
9
Would it be possible to have 3 planets that could be colonised by humans in the same system?