What single event would cause a large city to be closed down completely? I am developing a game and need a way to shut down an entire city with the citizens locked in with zero escape routes. Eventually they start fighting over resources (food, water, batteries, etc), and the strong survive. There's more to the story, but that's all I wanna say. Any ideas?

Have a nuclear reactor melt down somewhere near your city, and have the radiation cut off the citizen's access to the outside world. The level of radiation could be high enough that anyone trying to get out of the city would die before getting through the zone of radiation. Unfortunately this wouldn't prevent airplanes from reaching your city, but if the government wasn't willing to send anyone into the zone, then you're pretty much stranded.

You could have some freak storm blow through the area and pretty much hover over the city. This storm would cause intense flooding, and if your city is located on high ground, you could have the surrounding area flood, leaving your city an island. The severity of the storm could prevent any aircraft from reaching the stranded civilians. Piggybacking off the previous point, have the flood cause a nuclear reactor in the area to melt down, spilling harmful radiation into the water around your city. That way anyone trying to boat or swim away would be killed by radiation.

/ a way to shut down an entire city with the citizens locked in with zero escape routes./

The city was built that way. 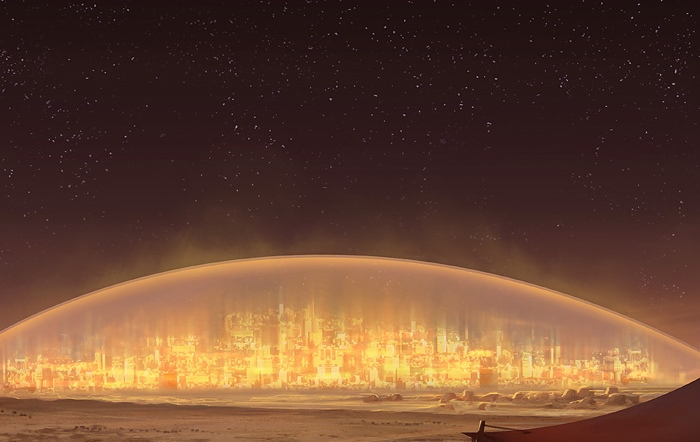 Your city is enclosed, built in an environment humans cannot traverse. Depicted: Donner Party City on Mars - but you could put it on the moon, or in the deep sea, or the deep subsurface (of Earth or some other planet) or floating in space. Humans are already stuck inside and dependent on what they have together with periodic resupply. When the resupply ships stop coming they have a limited number of vehicles capable of leaving, and people in the know rapidly take those to leave. People left behind are stuck there, and your game begins.

Well, zero escape routes would require something catastrophic that would also generally be implausible: the city itself is fine, but a perimeter around it is doused with radiation or toxic gas or something similar. Even a minefield or martial law would see people attempting to (and succeeding) escape. Look at the DMZ between North and South Korea for examples of that.

I guess a lot depends on setting. If you don't require a reality-check type of answer, it could be one of the above, or magic, or a curse, or... anything. Though if things got bad enough in the city, people would likely take their chances anyway.

There's a virus in your city and your government decided to isolate you until the problem solves itself.

Criminal on the run

Someone really dangerous has been located inside the city. Authorities will soon begin a giant game of hide and seek, but first, they decided to close the playground (the same works with a thief carrying something highly valuable).

Danger from the outside

It's your own city's leader who decided to close the gates, as the rest of the world has fallen into madness. You're the last beacon of civilisation for thousands of miles around, but for how long ?

Siege from a merciless invader

Like the Mongols, the invaders are determined to make an example of this city that dared resist them, especially if they executed their envoys. However, the defenses of the city are too strong for a frontal assault to work, so they are besieging it. Like at Alesia, they may even have built a palissade on top of earthworks all around it to make sure no-one gets out (or in, from reinforcements). Any civilian caught is executed, or simply left to die on the no man's land.

If magic or SF is an option and the invaders don't want to have the entire army tied up, they can create an impenetrable barrier around the city and move on, possibly leaving a small force to prevent the city from disabling the barrier. Options include deadly radiation, bioweapons, magical fire, a giant impassable wall, impenetrable or even carnivorous forest, raising an undead army, looping the borders of the city on themselves...

If you don't want to have the menace of the invaders to keep bearing down on the city population, with all the military preparations that are implied, leaving such a long-term "passive" siege may be enough as an example or as a military objective to neutralize the city.

10
Growing a city (literally)
7
Floating City for 1 billion people
4
How would an unexpected zero-g event affect a city?
41
Why do people continue to live in an unfavorable location when there are significantly greener pastures?
1
Mozart city proposal
7
City defenses against kaiju attacks?
12
Calculating City Size based on Population
5
What is the best way to cause swarm intelligence to be destroyed?
5
How to hide a city?
12
Is it realistic for a town to completely disappear overnight without a major crisis and massive cultural/historical impacts?