Do antenna farms on spacecraft make any sense or are they purely aesthetic? 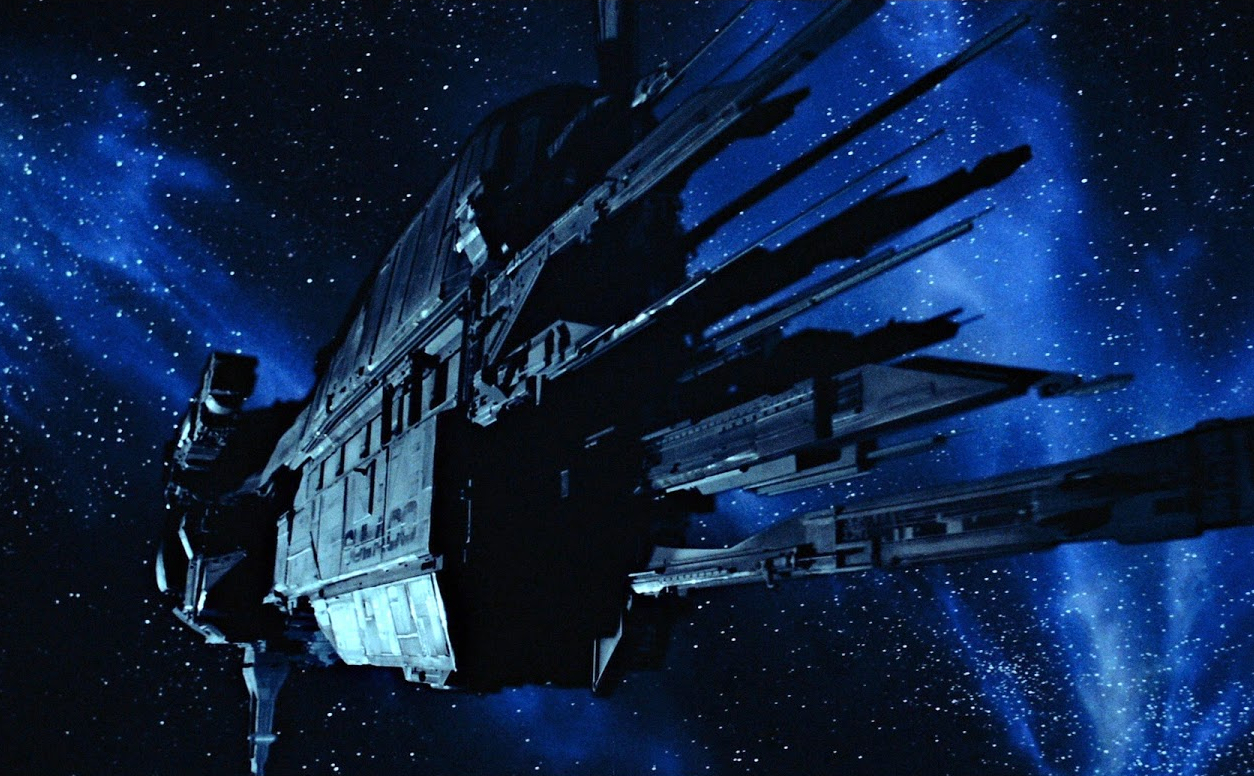 Antenna farm as seen on the USS Sulaco from Aliens (1986)

We often see menacing sharp communication spikes and clusters on spacecraft in movies, shows, games, and etc. It makes the ship look more utilitarian and imposing. Since I'm a big fan of accurately represented hard science fiction designs, I've always asked myself: why does it need so many antennas? Does it make sense logically and realistically to have giant antenna farms attached to spacecraft? Or is this just aesthetic? (including military, non-military, and station designs.)

'Currently designing a Trans-Lunar cargo ship which ships glass manufactured on the Moon to Mars (maybe Callisto). I was thinking it would be automated with the front portion occupied with the main control module were I think putting a small antenna farm would be suitable (would make it look a bit nicer too). The radiators need to be probably hidden within the shadow shield so they don't radiate the neutrons back onto the spacecraft.' (edit requested by Elmy)

Have you ever looked at a Navy ship? There are a ton of different antennas, each designed to serve a slightly different purpose. Multiple systems usually aren't designed together to work with the same antenna, so you will need a different one for every communication system you have. This image labels the radars specifically, but you will also have satellite uplink, GPS, traffic control, DirectTV, and so many more. 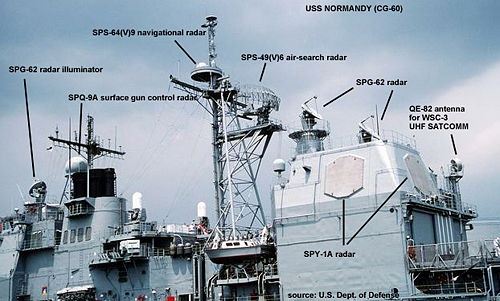 Your space ship will definitely require a number of different antennas as it will have a number of complex communication systems. Do they all have to be in the same place for a farm? Not necessarily, and especially in space, you may want some directional diversity. But unless you have a nice radome to cover everything and make it look pretty, you will definitely want a couple areas to place a bunch of antennas together.

We have real-life examples of jumbled antennas: antennas designed by Evolutionary Algorithms. 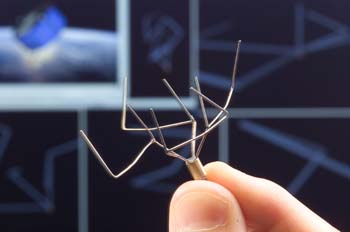 A whole ship antenna array would have a design that does not conform to any aesthetic considerations being literally function over form.

They would be complex to compensate for metal in the structure of the craft, adjust the internal phasing, having redundancy against some parts getting damaged, etc.

Having a whole lot of antennas all pointed in the same direction might be a good idea if there's a need for lots of redundancy, although I can't think of any such reason off the top of my head.

Alternatively, it might make sense to arrange a set of radiators like this -- thermal or otherwise. But that might be outside the scope of your question.

While they probably wouldn't look like menacing jumbles as in your example pic, antenna arrays definitely can have a functional purposes. Phased array antennas are used in many modern systems; check out the Aegis Combat System for a particularly sophisticated example.

It not only makes sense, but there should likely be more antennas (although they may not be visible)

Let's take a quick look at what an antenna is. It serves one primary function: To best balance the impedance (think resistance if you're not an engineer) between the circuit producing/receiving the signal energy and free space.

(overly) Simplified explanation: If you are a photon of RF energy (yes, they are photons... and waves...) and are cruising around on a nice circuit board, zipping around at say 70% of the speed of light following nice gold or copper pathways, you're happy. There isn't much resistance. But suddenly someone gives you an energy drink x10000 (power amplifier) and throws you out in space at exactly the speed of light. You're going to hit lots of shock during this transition. The antenna is kind of like a smooth transition process for you so that you can acclimate to the change.

But back to the matter at hand, why would a space ship need so many?

What this means is that any antenna built on a space ship will likely be used as part of an antenna array. Using fancy digital processing, the antenna 'beam' can be steered electrically while the antennas remain in fix orientation. While an overly-broad statement, the more antennas you have pointing in different directions, the more directions you can focus the RF energy towards without having to rotate an antenna. Also, the more antennas you have, the larger your overall gain is, which in distances of even light-minutes, could very well be important in space.

Also, some of the antennas could be used for directed energy weapons, which it stands to reason may require a massive increase in size due to the power densities involved. And ships need radars and other sensors, either passive or active, which will be looking in all directions around the ship, yet another reason to have more antennas.

Most of those aren't actually powered antenna - they are unpowered reflectors and parasitic elements to control the radiation pattern, and focus the transmission (like a Yagi-Uda antenna commonly used for receiving TV signals)

While there are multiple antenna in the "farm", they are either set up for different radiation patterns, or to send/receive efficiently on different frequencies, since fundamental resonance of a thin linear conductor occurs at a frequency whose free-space wavelength is twice the wire's length

Also - only some of them are for communications. Others are for various forms of scanning equipment, such as Radar

I appreciate that they are antenaes for something or lots of somethings, however as this is pure SciFi its not actually known what each one does, its just usually explained as the antenae array...

I'm going to make some handwavium up to explain this which would accommodate for this sort of design. i'm not suggesting the below is the actual design of the Sulaco!

Perhaps the larger spike at the bottom is actually the barrel of a massive anti ship cannon or rail gun, the spikes surrounding it are massive radiators which also protected the gun barrel from being hit as easily.

Above that are some form of transmitter receiver with a few redundancies.

At the very edges could be spikes that actually house point defense systems and countermeasures but the size of the ship means we can't see the detail to explain this.

And then the furthest forward sections are detection systems for maneuvers. you'd want to be able to gauge exactly how far away the barrel of the big gun is away from debris.

I admit this is definitely just adding spiky bits to make it look cool and then adding in some fairly generic reasons for those spikes being there, but its a possible reasoning

It might be because the ships are upgraded in a progressive process rather than built in one piece.

The reason they are all aimed in one direction is because they are supposed to face backwards, otherwise they will be damaged by interstellar dust.

Not the answer you're looking for? Browse other questions tagged science-fiction space-travel spaceships .

1
Does my idea of FTL make any sense?
6
Are there existing Earthly body plans that make trapezoid or hexagonal spacecraft volume efficient?
1
Does my “Bombardment cruiser” make any sense?