For my Science fiction and Fantasy genre book, I need an energy source whose energy output should be much more than even a fully functional Dyson sphere. Can you please suggest some hypothetical concept as an option?

Edit: I need just a Supernovae of energy to make some kind of hypothetical weapon, I don't need continuous source of energy. Moreover, I mentioned Dyson sphere just to indicate that I want to harness very high amount of energy.

I think @nzaman had the right idea- black holes contain an enormous amount of energy, in the form of angular momentum. However, you don't need turbines to harness the energy. As explained by this video, an object that escapes the ergosphere by giving up some of its mass will speed up.

The amount that the object speeds up is even more than the mass that the object gives up. This is called the Penrose Process. Here is a screenshot from the video that nicely illustrates the process: 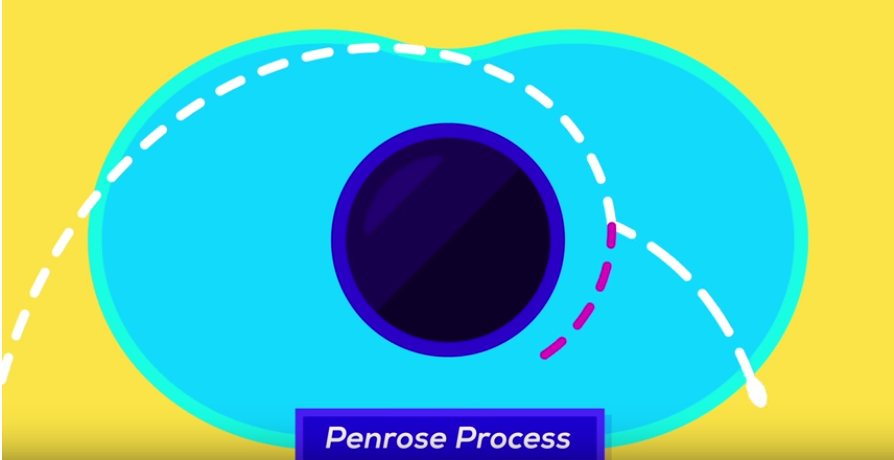 The object enters the black hole's ergosphere and then shoots out, accelerating as it does.

There is also another way to harvest energy from the black hole, and it doesn't involve giving up mass. Shining a laser by a black hole has the same effect. In the process of superradiant scattering, we can use mirrors to make the laser reflect through the black hole's ergosphere over and over. The light continually amplifies, until it is strong enough to be emitted and used as a power source. If the light isn't emitted, it has the potential to create possibly the most destructive weapon in the entire universe. Called the Black Hole Bomb, the light will eventually break free of the mirrors and wreak who-knows-what havoc. 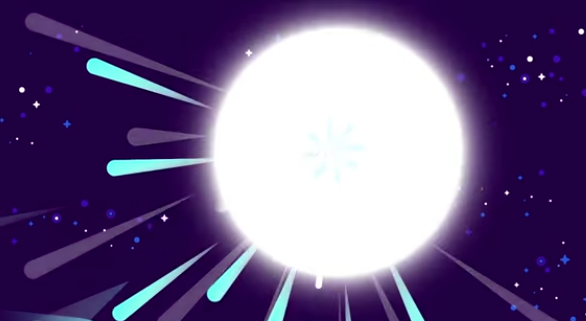 You can build a Dyson sphere around a galaxy. Or around TON 618, one of the shiniest quasars known:

The surrounding galaxy is not visible from Earth, because the quasar itself outshines it. With an absolute magnitude of −30.7, it shines with a luminosity of 4×1040 watts, or as brilliantly as 140 trillion Suns, making it one of the brightest objects in the Universe.

Compared to an hypothetical Dyson sphere built around our sun, the TON 618 one would give way more than the output you mentioned in the comments to your question.

Black holes hypothetically can be tapped to generate the energy of a star in a much (much) smaller package. 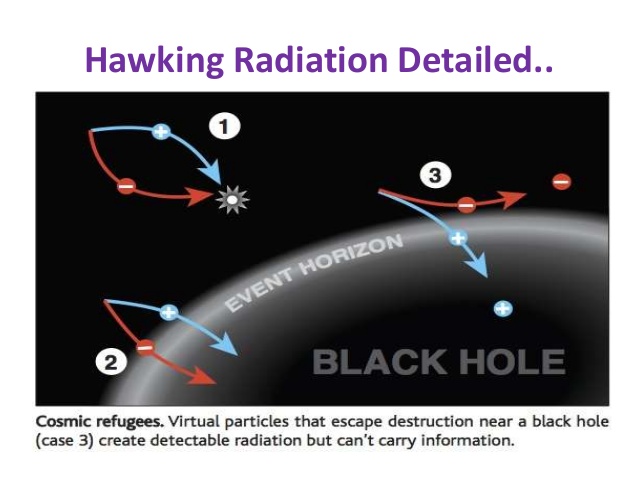 The process by which Hawking radiation is emitted

The maximum amount of energy gain possible for a single particle via this process is 20.7%.4 The process obeys the laws of black hole mechanics. A consequence of these laws is that if the process is performed repeatedly, the black hole can eventually lose all of its angular momentum, becoming non-rotating, i.e. a Schwarzschild black hole. In this case the theoretical maximum energy that can be extracted from a black hole is 29% its original mass.5 Larger efficiencies are possible for charged rotating black holes.6 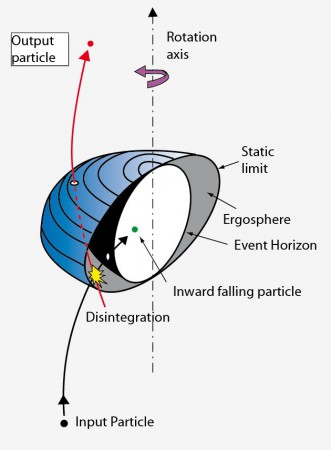 Simplified diagram of the Penrose Process

Since we are talking about stellar sized black holes, this is actually an enormous amount of energy.

Finally, a refinement of the Penrose process can be made by integrating the electrical and magnetic fields that often accompany the environment surrounding a black hole. This is the Blandford–Znajek process

The Blandford–Znajek requires an accretion disc with a strong poloidal magnetic field around a spinning black hole. The magnetic field extracts spin energy and the power can be estimated as the energy density at the speed of light cylinder times area:

where B is the magnetic field strength, r_c the speed of light radius and ω the angular velocity.6 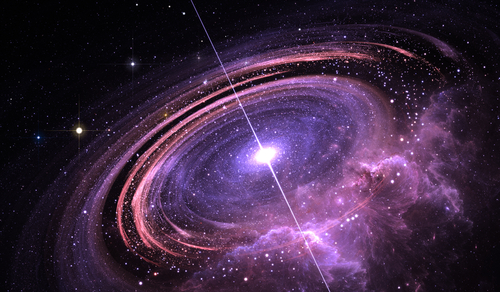 Quasars are powered by supermassive black holes, with masses thousands to millions of times greater than the Sun

So the energy output will vary based on the size of the black hole being harvested (much like a Dyson sphere output will depend on the star within), but black holes are quite compact, so the energy density will be far higher. Remember, outside of so called "quantum" black holes created artificially or near the beginning of the Universe, black holes are stellar remnants, so you are dealing with objects starting at about 3 solar masses in terms of size, and the black holes near the centres of most galaxies are thousands to millions of times more massive than our Sun.

You've not got the "reality-check" tag on this one, so how about...

This is high-octane handwavium. It's almost certainly nonsense, but so is readily harnessing power on the scales you're talking about, so let's roll with it. Vacuum energy is one of the theories behind the energy deficit between observable space and the rate of universal expansion. Its potential scale varies by theoretician from very small (the most likely case) to enormous (the most useful case) to infinite (unlikely, but even more useful for your world).

Now, harvesting the energy responsible for the expansion of the universe might have some localized (or not-so-localized) effects on spacetime, but that could be another fun plot point:

"Preserve the universe!" the activists cried, their placards waving outside the administration building. Inside, the C-suite scoffed. Redshifting of the local cluster had been only 1.4% over the last decade, nothing to worry about.

Assuming you set your reality's version of vacuum energy to the "infinite" or "near-infinite" end of the scale, you can have as much power as you want.

The idea of a Dyson sphere is to capture all the energy produced by a star, at the rate (i.e., power) the star normally emits that energy. Which might take billions of years. One way to get more power out of it (energy per unit of time) would be if you could accelerate the burning of the star.

I guess this is what was seen in The Force Awakens, where the bad guys had a weapon that consumed a star and almost instantaneously turned it into blaster beams or something.

Somewhat more "realistically", you might have something shaped like a Dyson sphere that surrounds a star and consumes it (converting all matter into energy) in a much shorter timespan than the normal life of the star. Then you could go looking for another star to consume, and so on.

If you don't need continuous output, a gamma ray burst https://en.wikipedia.org/wiki/Gamma-ray_burst will do nicely, typically releasings as much energy in a few seconds as the Sun will in its entire 10-billion-year lifetime.

The problem with naturally occurring stars is that, like most things in nature, they aren't purpose built to maximize efficiency.

Sure, they're free to construct, but they come pre-loaded with a bunch of mass that you don't want. It sits in-between your sphere and the energy released by the fusion reaction, preventing clean, unobstructed propagation.

What you really want is a star sized cluster of smaller dyson spheres built around artifical stars, complete with fuel injection and spent mass extraction, so that more of your mass and space are dedicated to the production and storage of energy, instead of an incidental fusion reactor sitting underneath a giant pile of inert mass.

I'm in the middle of the non-fiction book "Life 3.0" by Max Tegmark. I don't remember the numbers exactly, but he discusses the fact that only a tiny fraction of a star's energy is actually radiated as light or heat — less than 1% of its total energy. The book is about possible scenarios and directions for artificial intelligence, so he is (probably appropriately) diving off the deep end, but I believe he was suggesting that mass itself is equivalent and could be converted to energy (E=MC2). So in some futuristic scenario, any kind of mass could be converted to a lot of energy. And you could potentially harvest an entire star, or solar system, or galaxy. Preferably not ours. 😱

Here is a radical option inspired by Stephen Baxter's book Ultima: time travel from the end of the universe. If your universe will end by a big rip or by M-Brane collision, there could be massive amounts of energy released as the universe rips apart.

More possible method: the smaller a blackhole is, the faster it evaporates and outputs hawking radiation. By producing millions of microscopic black holes(via focusing lasers on a very small space to create a kugelblitz) and continually feeding each one a trickle of matter, you could convert matter to energy with 100% efficiency.

Black holes at the centre of galaxies.

Collect energy by placing a series of giant turbines just outside the accretion disk, or even in it, to be driven by the rotating matter.
If you could somehow couple them to form a tight circle, it would both neutralise the gravity well of the black hole, as well as create another plane of rotation which you can tap for energy.

It's kind of simple... but why not just use a big ole pile of antimatter? The use case for the energy is a big burst so you could use any conceivable energy production means to build up your pile, then annihilate an arbitrary amount to power your weapon with a massive energy burst.

Dropping things onto a neutron star is another classic approach.

You get about 10% of the rest mass back as energy, as a rule of thumb. (Collecting this energy is problematic, though, as it's largely X-rays and up.)

Not the answer you're looking for? Browse other questions tagged energy .

16
Energy source for a generation ship
4
A one time source of high energy in a post apocalyptic world with limited energy
3
A psycho-active energy source
7
Dyson sphere construction
2
Kinetic Energy Absorption
9
Could black holes be a better source of energy than stars?
6
Compact Mechanical Energy Source
4
Would a Dyson sphere be useful as a means of power generation?