Example: A town in the mountains that was placed for a mine. The mine emptied but the town remains, unreachable by air due to mountains, reachable by vehicle only in the summer, and it takes a couple of days. Something like that, but completely realistic.

There are plenty of places like that, but you have to consider that remoteness is relative to other places. Even in a major capital you will find small neighbourhoods that are a pain to get to, even if getting there is not particularly difficult - like a district with poor public transport that you need a taxi to get to. Note, that they wouldn't be completely isolated, but would require more effort to get to than similar settlements.

Where would that be?

But why would anyone live there?

That is you main concern. There has to be a strong incentive for people to build and support large cities in the middle of nowhere. Examples follow:

How long is too long to travel?

Nowadays you can get almost anywhere if you have a plane or a helicopter. This is basically your "travel anywhere" perk. However, travel by planes is restricted by airstrips (though a city would have one if it's needed for sure), bad weather (constant fog, high winds, frequent storms) and terrain (mountain peaks, having to land on a slope).
With that in place you might find that roads take days to travel by 4x4 car, especially in the winter and railways are too expensive to maintain or impossible to build. Remember that dangers of the travel might be more important than length. If every year several trucks are being buried in mud or lost in an avalanche there might be little incentive to use that mean of transportation.
Travel by sea can be equally perilous. For the longest time Galapagos Islands remained unexplored because access required sailing around Cape Horn, a feat of seamanship that not every naval vessel could boast. With advancements in sea travel most places are definitely reliably reachable, but it might be simply too expensive and uneconomical to maintain frequent sea routes.

The city of Magadan is a good example of isolation. Shortest ground connection is a 1200 miles long unmaintained road (to another not-so-reachable city of Yakutsk), impassable during summer. A boat trip to mainland (summer only) takes about a week. Exaggerating weather conditions just a little bit would make air communication next to impossible.

The city exists solely as a gateway to a very rich (gold, iron, other metals, coal) and equally inhospitable Kolyma region.

Oh yes. They certainly exist.
There are some towns like that "somewhat south" of where I live.
You've probably heard of them :-).
The furthest away is called "South Pole". A some what closer one is called "Mcmurdo". Not too far from Mcmurdo as the Snowcat runs is a town named "Scott Base".

THe following gives enough of a feel for the match to the aspects that you mention. If at 1st glance your building description does not seem to fit, have a look at the start of the National Geographic "Megastructures" video.

Commuting between South Pole to Mcmurdo by air is either

'Impossible' means either that you could not sanely get an aircraft off the "ground" or that, if you'd done so, it would probably be the last bad decision you ever made.

For freight, going by "road" is much more reliable and economical than by air, even though the average road speed is under 50 miles per day. 'Rather specialised ' convoys make the trip regularly. For some reason they call it the South Pole Traverse. It's about 1000 miles each way - although another 1000 may end up happening. A round trip takes typically 40 or 50 days.

Not at Mcmurdo per se but at a remote field base which they flew to from Mcmurdo, on one occasion they crashed three C-130 Hercules aircraft (small-airliner size freight carriers) aircraft in a row before giving up and leaving them until a later date to attempt recovery. XD-07 aka Betty Boop was recovered 5 years later.
Interesting account of the events here

From either town to "civilisation" (which is Christchurch in New Zealand) is about 2000 miles - the normal means of access is by air as the alternative sea + "land" route is an adventure in its own right.

A C130 that survived the triple grounding

Coach class - Christchurch to Mcmurdo to South Pole by air.
All change at McMurdo. 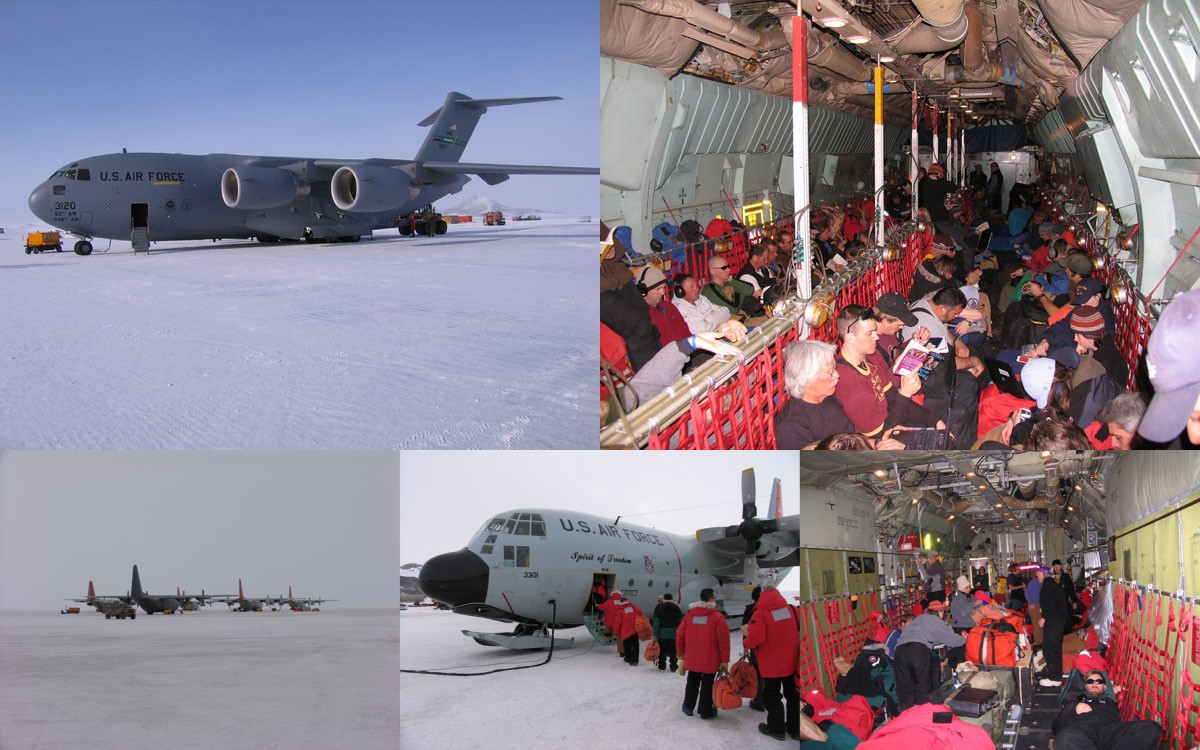 3
Bringing water and heat to an isolated mountain village

19
Population Range for a Booming/Dying Frontier Town
13
How could a monarch rule in a vast, isolated, medieval city
33
Is it reasonable to have a town that is only accessible by sea?
10
Technology level for 1000 isolated people
2
A Postapocalyptic Medieval Frontier Town
54
Is roof-hopping through a city realistic?
35
Is a small indoor city realistic?
6
English Medieval town layout
12
Medieval town built on the desert side of a mountain range?
4
Is it realistic to depict a gradual growth from group of huts into a village and town? Or is it more realistic to depict it as series of big jumps?