Would Be Possible To Build A Small, Lightweight Boiler For Airships

I am wondering if it would be possible to make very lightweight and small steam engines for airships. Said airships engines are actually electric, but the boiler generates the electricity (via a generator that it turns). Now most of the airship is lightweight aluminum and wood, so could you build a boiler light enough to allow the ship to carry significant cargo? 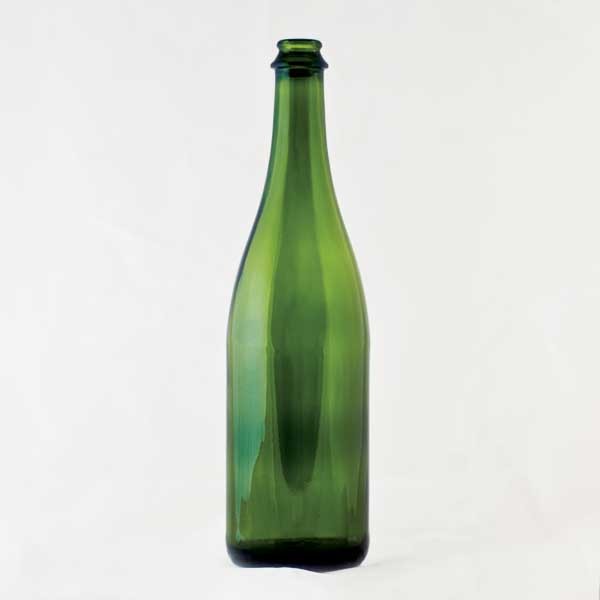 Champagne bottles can withstand about 90 psi, which is comparable to the pressures of early steam engines. Glass is about 2500 kg/m3 mass; aluminum is 2700 kg/m3. Bottle boilers would be light. Using many small bottle boilers is safer - the amount of energy inside any given bottle boiler is less and so catastrophic failure entails the sudden release of less energy.

I envision a boiler room of many bottle boilers, with spares kept in the next room. The bottle boilers should be hooked up in parallel, because if in series failure of one bottle would cause the others to vent through that bottle. Each bottle boiler contributes its energy to the production of electricity. Water is condensed in the open air via radiators and returned to fill depleted bottles. I am not sure how the bottles might optimally be heated - one could have hot salt water circulated among them and then back to the heat source in a closed system.

Bottle boilers would be a cool steampunky sort of way to generate electricity. Champagne bottles were invented around 1800. The rows of gleaming green bottles with tubes leading up and out would be a sweet visual.

One way which boilers can be lightened is so called "Flash" boilers, which only heat a small amount of water at a time and can raise steam very quickly. Modern day "tankless water heaters" operate in a similar fashion, with water flowing through a serpentine path while being exposed to heat, the amount of heat is obviously regulated so the water inside never boils, but if you could override the safety devices, then you could, in principle create a boiler.

However, this still does not solve the problem of carrying fuel and extra mass for radiators, condenser pumps etc.

Another workaround would be to carry the energy already inside the boiler fluid. This would be something like using a very high concentration of Hydrogen Peroxide (H2O2), and having it decompose when exposed to or flowing over a catalyst. Variations of this idea were popular in the 1930's and 40's, with the German military experimenting with rockets powered by mixtures of H2O2 and methanol fuel, or using H2O2 as an oxidizer for diesel fuel burned in turbine engines.

The H2O2 rocket motors were used as JATO boosters for large aircraft and the early jet bombers like the Arado 234 (to overcome issues of low thrust and long "spool up" times for early turbine engines), and to power the Me-163 rocket interceptor. Walter turbines using H2O2 were experimented with by the German navy to power submarines, and could provide impressive performance underwater.

The biggest issue for using chemical decomposition for oxidizers or rocket fuel was the extreme danger of using H2O2 in the first place. It was highly corrosive, and could decompose if any contamination was present in the system (creating a nasty issue of exploding as you were carrying out fuelling). To safely use it in the M3 163 rocket interceptor, a very careful and involved system was developed to prevent any cross loading or cross contamination, and a source of flowing water was always nearby to provide thousands of litres of water to flush and dilute any H2O2 which might have spilled or splashed.

So while there are alternative ways of generating steam which would reduce the amount of weight in an aircraft, "flash" boilers don't offer many advantages over conventional boilers when you consider the total system, and chemical generation of steam is potentially very dangerous to the user.

It's worth noting steam power has come a LONG way since the early 20th century.

As have materials with fancy plastics, carbon fibre composites, glass fibre composites, better aluminium alloys and tempering. given the options available these days I have little no doubt that a skilled engineer COULD construct a sufficiently powerful-steam based system for use in lighter-than air propulsion. It's not just the boiler that would be improved however, it's likely that everything would be significantly re-designed.

(If you are writing an alternate history/alternate universe these are technologies your people simply HAVE, science simply took a different route.)

That being said people are right when they say you probably have better methods available, while you by no means necessarily have internal combustion simply due to to having electricity it does seem likely, and while nowhere near as dangerous as AlexP implies having a large fire around a hydrogen gas sac is a bad idea. That being said it's possibly your group wants to avoid internal combustion for any number of reasons:

If you ARE using a closed-loop steam system note you needn't bring nearly as much water, though I advise against this since it removes those beautiful steam clouds which make steam engines so Romantic.

BTW there's actually no reason that you'd necessarily need a steam-electric hybrid motor. You could easily have a propeller connected to the main-shaft as well as an alternator with electric motors only being a secondary form of propulsion.

Not the answer you're looking for? Browse other questions tagged engineering airships steampunk .

9
Airship Aircraft Carrier Dimensions
6
What ways are there to keep a steady altitude with large fluctuations regarding load?
12
What are the consequences of using limited anti-gravity for steampunk-style airships?
14
Armament for airships filled with non-flammable gas
2
Feasibility of electrically heated steam engine
3
How high can a Victorian-era kite sail be flown?
6
Post-apocalyptic aircraft
4
Steam-heated Balloons?
1
What is the viability of this airship using modern technology?
8
How functional/versatile would airships utilizing perfect-vacuum-balloons be?