To make it short, time-space shenanigans transported everything in a 60 kilometers circumference around an old space-based particle collider to the year 1855.

The particle collider was in geosynchronous orbit with Earth, in a region of space that was heavily packed with space junk: Pieces of old ships, discarded satellites, remains of an orbital shipyard.

Most pieces are no larger than a baseball, some are as big as modules of the ISS, and there are three big pieces that are the remains of the space shipyard and the fragmented particle-collider that are each as big as the whole ISS.

Could anyone on Earth, on the year 1855, detect the anomaly?

Have a look at this question in Space.SE, a sister site of World Building:

Are any geosynchronous satellites visible with the naked eye?

If you're extremely lucky with weather and other conditions from where you're observing (especially the light pollution, described e.g. by Bortle scale, should be as low as possible to detect such faint objects), you might be able to see some [satellites in geosynchronous orbit] with powerful binoculars or a hobbyist-grade telescope...

...they [satellites in geosynchronous orbit] are easily seen with a small telescope on a sturdy mount. March and September are the best times. Use an app to help you. My favorite way is to keep M11, the Wild Duck Cluster, in view with a medium power eyepiece. Every few minutes, a "star" will slowly track through the southern edge!

Victorian telescopes were comparable to nowadays amateur telescopes, and on top of that light pollution was less intense in victorian times than nowadays.

However, it would still take some luck to find even the larger pieces. Space is huge and you can't just scan the whole night sky with a telescope. Once a competent astronomer finds them, though, they will be able to take note of their keplerian orbital elements (see graphic below) and thus predict their position at anytime with great accuracy. 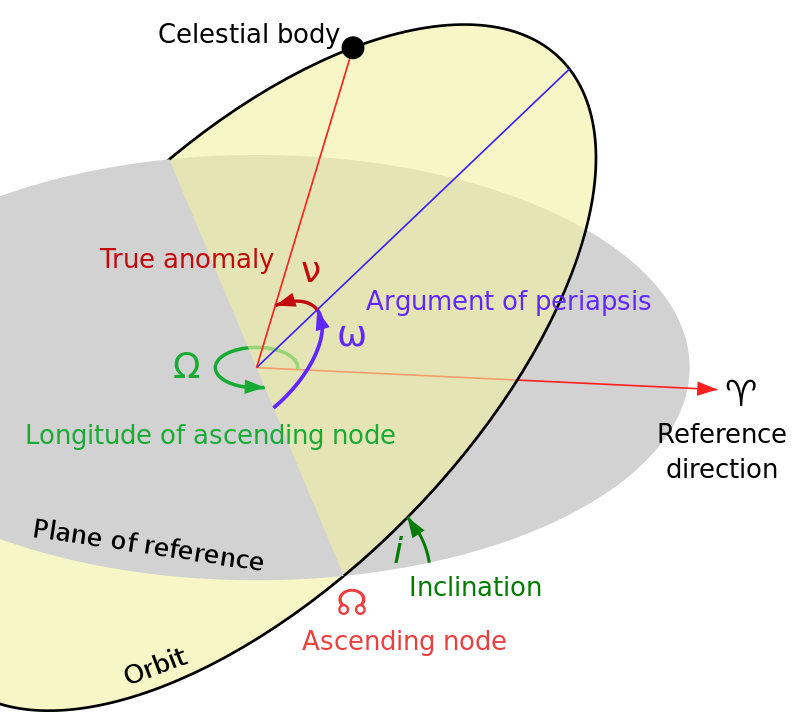 Absolutely, yes, objects as large as your criteria could have been observed in 1855.

There were several very good observatories at the time, for instance

Sydney Observatory began operations in 1858 on a small hill located near Sydney Harbour. It is best known for its involvement in the observations of the 1874 transit of Venus and for its participation in the International Astrographic Catalogue project. The Observatory remained a working observatory until 1982 when it came under the auspices of the Powerhouse Museum and became a museum of astronomy and a public observatory.

Light and atmospheric pollution was minimal in the country.

The population was around 1.2 billion people, so lots of observers.

The critical factor would be where in geostationary orbit it was. it would have to be somewhere over the equator, and over a land mass. Not too many choices. Chances of it being seen diminish the closer it gets to the middle of either ocean.

The advantage is, that it would have to be over the equator, and the equator is primarily in the planetary elliptic plane of the solar system. The planets would be a very good target for astronomers, and so a lot of the time they would be looking roughly in the same plane as the debris. This greatly increases the chances of them seeing it.

The short answer is yes, the three largest pieces each as large as the ISS could have been detected with 1855 technology.

I point out that under certain conditions some satellites and the ISS can be seen with the naked eye from the surface of the Earth in night time, and even in some cases in broad daylight when the sun is high in the sky.

The ISS orbits at a height of about 205 to 270 miles (330 to 445 kilometers), so if it was about 100 times higher in a geosynchronous orbit it would be about 10,000 times as dim, so at its brightest at that height it might still be visible to the naked eye looking like a very dim star.

Here is another approach to the problem.

Asaph Hall discovered the moons of Mars, Deimos and Phobos, in August, 1877, using the 26 inch refracting telescope at the US Naval Observatory in Washington, DC. Since Mars at its closest is about a thousand times as far away as as objects in geosynchronous obit, Deimos and Phobos would be about a million times as bright as seen from Earth if they were in geosynchronous orbit around Earth as they are in Martian orbit.

According to my rough calculations Phobos the larger moon of Mars probably has less than 100,000 times the surface area of the ISS, and is probably made of less reflective materials. Therefore a satellite the size of the ISS in geosynchronous orbit should be at least ten times as bright as seen from Earth as Phobos in Mars orbit is as seen from Earth. Any telescope which could be used to detect Deimos and Phobos around mars could have been used to detect objects the size of the ISS in geosynchronous orbit of Earth.

The telescope that did detect the moons of Mars at the distance of Mars, the 26 inch aperture telescope at the US Naval Observatory in Washington, DC., was built in 1873, and was one of the first telescopes to have have such a large aperture.

I hope this answer has helped you a bit.

I hope there are people here better able to calculate the apparent magnitude of ISS-sized structures at the distance of geosynchronous orbit, and also to calculate the apertures of telescopes necessary to detect them. And possibly someone familiar with 19th century astronomy might suggest which astronomers and which observatories would be most likely to discover the fragments in geosynchronous orbit.

You may need to ask as the Astronomy and the history of science stack exchanges.

Well, you get the picture.

Lots and lots of handwaving the inconvenient details away.

But once all is said and done, and the details tucked away, dismissed, or taken care of, Sputnick was visible by the naked eye. Or at least the booster was.

It seems by the number of comments this has generated, that the intricacies of time travel BETWEEN THE SAME SPOT are not generally comprehended nor appreciated. So, some basic high school physics, in a very simple non-math presentation, for the uninformed.

First, let's talk about some of the basic principles of real estate pricing - location, location, and location. The earth rotates. Between noon and midnight, it has gone through half a rotation. So if something drops out at noon, and arrives back in the same spot at midnight, it is half way around the world. The earth goes around the sun. In six months, it is at the opposite side of the sun in its orbit. So if something drops out today, and reappears six months from now, the earth is half way around the sun. It drops into empty space. But the sun moves through the galaxy. And the galaxy moves through the universe. Oh, and the universe is expanding. So if something drops out today. and drops back in 180 years ago, the earth is no where near where it is now. Or where it was, now. Potentially hundreds of light years away. To be 'in the same spot', it needs to drop in where the earth WAS, not where it IS. But where it WAS is now where it IS, when it drops in. Instantaneous transfer of communications just got worse, because now it is not just through time, but through a great deal of space as well.

When you are talking orbital dynamics, it gets even worse. To drop back into the same spot in a geostationary orbit, it has to drop in at exactly the same millisecond in the time, day, year of the orbit that it left.

The moon will have changed its position in orbit. The sun will have changed its position in the sky. The moon's precise orbit and speed have changed. With the amount of solar dust and debris that the earth has accumulated, the earth's mass will also not be the same. 60 Tons Of Cosmic Dust Fall To Earth Every Day. The exact speed and position of any satellite depends instantaneously on the convergence of all of the gravitational forces on it at that time, and all of the acceleration forces thereby generated. Put the moon and the sun in a different position, the gravitational forces change, and the satellite instantly goes through a very rude course correction. But where did the energy for that course correction come from? What happens to the inertia? The momentum? Seems you have a satellite in some crazy orbit.

Things in space rotate around their center of gravity. Take a substantial portion of the 'thing' away, and the center of gravity changes. The spin becomes very erratic. Orbital stability is lost. Instantaneously.

There are stresses throughout the orbital facility. They are all balanced, spread out. So, suddenly, these stresses are not balanced. They do not move around and readjust, as they would in a breakup. Rather, they just disappear. A strut holding something up by transferring the fore, is no longer transferring a force. But that force did not deflect to something else. The energy just ... well, just what? The satellite has become very unstable. In a normal breakup, you have Newton's Law. Here, you have an action with no reaction. The force gets applied in only one direction. No 'equal and opposite' about it. I am not sure you will have anything left, except dust and particulate debris.

The earth's rotation, as I mentioned, has changed. An orbit designed today to keep it geostationary or more generally geosynchronous, will not be the same orbit as 180 years ago. If satellites today are not adjusted periodically, their orbit decays, partially for this reason. The algorithms for GPS satellites are being continuously updated to account for this. Where, oh were, is the debris heading? No worries about seeing the debris, it will be a long, continuous, very spectacular 'meteorite shower'.

So handwave all of these instantaneous changes on the space debris away as just inconvenient factors?

To keep things the same when everything is different, you need handwavium wrapped up in more handwavium embedded in handwavium with an abundance of handwavium mixed in.

Time travel was so much EASIER in 1855. The physics textbook was far too thin for these inconvenient details to mess it up.

Not the answer you're looking for? Browse other questions tagged science-based space time-travel or ask your own question.

8
What would life be like on the remnants of a shattered planet?
4
FTL telescope-satellites
8
Satellite salvaging: safely de-orbit and retrieve spacecraft or other objects
1
Detecting an astronomical anomaly
3
Largest artificial planet
5
The Colonist - Part I: Construction
6
How many satellites would we have to launch to create an artificial set of rings around Earth