No one knows for sure the composition of Greek fire, but there is almost certainty that it truly existed.

What would be the effects of earlier Greek fire during the time of the Western Roman Empire?

Could it turn the tide of war against the barbarians? Would it prevent a sieging army from storming walled cities? Could dedicated machines be created to move greek fire throwers around battle field in order to use it as a - frightening - flamethrower superweapon? Had this been done, could a smaller Roman garrison stop the maraunding barbarians? (Huns, Goths, etc.).

I love your drawings.

I don't think this would work as you intend...greek fire is a napalm at best and doesn't work well like this. If you could pressurize it, it could be shot in a stream, but I doubt the range would be much more than a super soaker. Romans did make decent use of greek fire in their catapults as is, so the idea is there.

I get the feeling the structure would be most likely to set itself on fire.

What would be the effects of earlier Greek fire during the time of the Western Roman Empire? .... Had this been done, could a smaller Roman garrison stop the marauding barbarians? (Huns, Goths, etc.).

Unfortunately no, Western Rome did not fall to marauding Barbarians, it fell to economic and political reasons, the barbarians just took advantage of a crumbled empire. Even the presence of a super weapon wouldn't have helped the situation much...infact attempting to pay for said super weapon would likely increase the speed at which it crumbled. With all the infighting going on, this weapon would have seen more use on other Romans than on barbarians anyway.

Going to change the question a bit...to what could have saved the Western Roman empire from collapse.

If you want to get to the core of the fall of the Western Empire, you need to see the state it was left in. From 150ish AD to it's final fall, more Roman emperors died to assassination than any other cause. At one point it was split into three empires as Gallic Empire, the eastern Palmyrene Empire, and the central Roman empire. The resulting civil war lasts for a good 100 odd years with well over 50 people claiming emperor status before Diocletian comes around 285ad (after a bloody civil war that ended with his opponent killed by his own troops...being killed by your own body guard or own army is actually a pretty consistent theme of this time). It was ultimately Diocletian that seeded the western/eastern empire view with a Tetrarchy view (one senior and one junior emperor for western and eastern empires). After Diocletian retired, Constantine the great sees his 31 year reign (and probably the height of the Roman empire here) and when he dies the three sons divide the empire up once again (interior, west, and east)...get into a dispute about it...and start off another civil war. (the winner of this civil war is killed 10 years later by his own troops).

As you can see, the Western empire is changed about several times and exists as everything from Europe and including rome / Africa, to at one point simply being the former Gaul lands and Britannia. This constant state of flux and civil war provided nothing but uncertainty and led to extreme economic depression. The problem with an empire the size of Rome is your emperor is going to die (natural or otherwise) and the replacement for tends to be disputed.

Finally, after all the infighting described above, now the barbarians enter and see a financially crumbled empire barely able to feed it's own people let alone defend them...there was actually a period of time here where there was no Western Roman emperor and when there was one, he was rarely recognized by the eastern empire as a legitimate claim. The capitol was no longer Rome (Milan for a time before moving to Ravenna) and a couple of the last emporers never exercised any control beyond Dalamatia. Peoples such as the Goth struggled massively under Roman rule (Romans hatred of the Goth people is very obvious), so it took very little to convince entire populations of the Roman empire to chuck Rome aside and join the barbarians.

As you can see, the Western Roman empire had defeated itself long before the Barbarians ever invaded. If you can address this political turmoil, then you have the route to which Rome could survive.

I should also mention that had Rome survived, it was facing another series of challenges from the Franks, England, the Umayyad Caliphate, viking invasion, challenges to the throne by leaders of the Holy Roman empire, and a whole slew of other challenges. It was not an easy time for an empire to survive.

Just to give you an idea of the level of absurdity some of this reached...Year of the 6 emperors began in 238 AD with Maximinus Thrax. He was accused of being a very tyrannical ruler...in Carthage, tax collectors were murdered leading to the proclamation of Gordian I the new emperor. He was quite old and declared his son co-emperor. This lasted for 20 days when a neighboring governor that hated the Gordians led an army and defeated them in Carthage with both Gordian I and II dying in the fall out. Two elder senators were then made Emperor, but they fought/argued heavily. Maximinus Thrax still commanded an army and was marching back to Rome...but he was slain by his own army. Shortly after, the two senators got into such a fight that the praetorian guard intervened and killed them both.

Why stop there? If we're jumping the shark, let's jump over sharks with lasers. 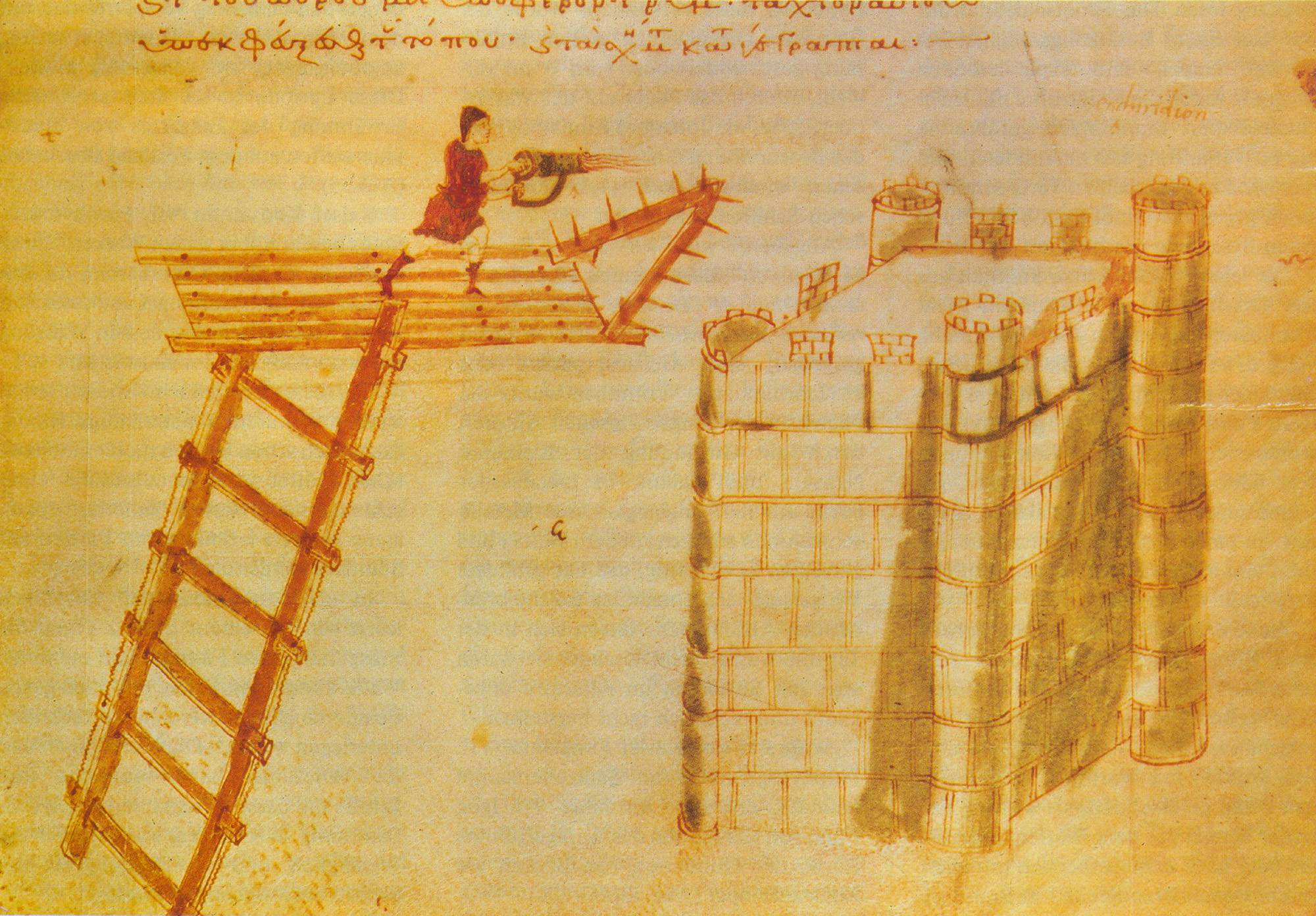 The original greek fire consisted of either inflammable pots of what is essentially tar or of a pressurized liquid shot by the use of a bellows. Your Incendiari would carry a pot of flammable liquid on their backs and a metal tube with a thin bellow driven nozzle, with the top end burning like a candle. Besides the firebackpack, they'd carry a big shield. A second person behind would power the bellows.

Not the answer you're looking for? Browse other questions tagged technology warfare weapons alternate-history ancient-history or ask your own question.