Could this moon of a gas giant orbiting a neutron star support life? 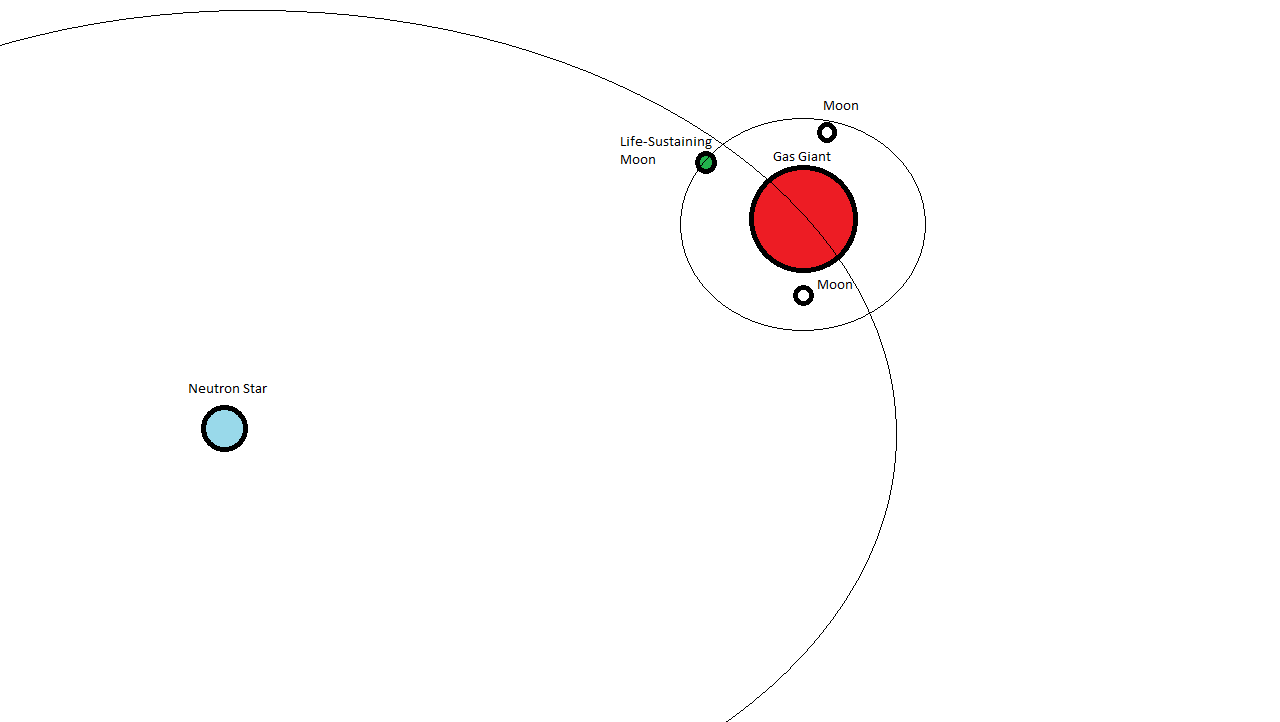 Making the following assumptions:
1. The three moons of the Gas Giant are safe enough distances from and massive enough not to pull each other apart or send themselves careening into the void.
2. Life on the "Green" moon is protected from radiation (through incredibly strong bonded atoms, a ridiculously protective atmosphere/magnetic field, or some other means).
3. The "Green" moon is "Like-Earth", diverse ecosystems and biomes, liquid magma core, etc 4. The bodies in orbit around the star formed or entered the system, after the star's collapse.

Is there a minimum safe distance from the star that would allow the "Green" planet to continuously support life for, let's say 10 billion years?

If so, I'll end up asking if anyone has ideas on what the sky would look like during the day and night during periods where the star would be visible, in another question.

Okay, energetic Neutron stars tend to slow down after a few million years, getting rid of most of the gamma radiation, and high energy particles which would easily overwhelm a planets magnetic field.

Assuming the accretion belt has mostly been picked of by the gas giant, or the neutron stars younger days, its unlikely to kick up into xrays (which is very bad for life as we know it). Unfortunately if it does still have an accretion disk this neutron star could regularly sanitise the planet. This does imply that this star cannot have much, or any comets/asteriods making up an asteriod belt, or some kind of oort cloud.

Next up Neutron stars do produce visible light, they are however very faint. So that gas giant is going to be orbiting close, maybe not hot gas giant close, but definitely somewhere closer than earth. But far enough away that the greedy neutron star doesn't shred it. I'll leave the maths up to you just remember that gas giant does not need to loose very much mass to that neutron star, for your green moon, to become a red moon.

That being said, life on this green planet probably won't be green, there will considerably more food energy available either through tidal heat, or in the higher ultra-violet part of the spectrum. Also if plants stuck with the visible spectrum they will likely appear black, as there just wouldn't be enough energy in the visible spectrum to sustain them otherwise.

If you were to stand on this planet, you would see a small dot of light, smaller than our moon move across the sky, its daylight but it won't look much brighter than a stormy day. Life would have to pump large amounts of green houses gases into the environment to maintain an Earth like temperature (on average). Every few days/weeks temperatures would plummet as the moon was eclipsed by the gas giant. Hopefully the habitable moon is orbiting close to the gas giant so that it spends only one or two days in shadow, or even better only a few hours.

Alternately you, that is complex life, does not exist on this planet. Instead extremophiles that can easily survive cold, or live on basically nothing nestled deep in the crust rule here. There are instances of life in these environments on earth. This would relax some of my earlier assumptions as the gas giant can orbit further out, the moon can spend more time in the gas giants lee, and the occasional xray bombardment could be recovered from. It could certainly be a living moon. But is it a Green moon? Probably not.

Not the answer you're looking for? Browse other questions tagged moons orbital-mechanics stars life gas-giants .