How to transmit energy through rock and store it in crystals?

I have created a species that is basically a sort of land coral covered in a thick carapace made of rock.

They live on an Earth-like planet (Class M as they say in Star Trek) and behave like coral does on Earth, except for not living underwater. They feed on tiny particulate of matter in suspension in the air, mostly pollens from plants (don't come there if you're allergic) and some sort of flying plankton.

Their carapace isn't one thick sheet of rock, but made of many small sections that fit together. From the outside, it would look like a very rugged rock. On the inside, the coral lives around a core of crystal which grows as the coral grows. It sends tendrils into the ground to get minerals, much like the roots of a tree.

They're mostly active at night, opening the carapace to send some sort of tendrils out to catch the food in suspension in the air; there's much more food at night because the local flowers send their pollens out at night en masse, and spend the day hidden under their shell, keeping the biological parts protected from the UVs coming from the local star and soaking up it's energy. The flowers grow year round thanks to a quasi absence of axial tilt.

My question is how could it transmit solar energy through it's shell to feed the coral and store it in the crystals, and what kind of crystals would be most efficient to store the energy?

I'm looking for biological processes here, or ways to adapt technological means into biological if it's believable. I was thinking of storing the energy in chemical form inside the crystals, to be released when needed by some chemical process.

I'd like a science-based answer, though not hard-science and some handwavium is allowed since this will be used in a sci-fi setting. Thus not everything has to be exactly as it is here on our Earth.

Use calcite for the covering

Corals are pretty cool already. They're symbiotic relationships between an animal (not a plant) very similar to a sea anemone and tiny dinoflagellate zooxanthellae that use photosynthesis to produce organic carbon from thin air.

Now, I'm assuming that your land corals are constructed similarly. The external covering is likely calcite, just like oceanic corals, and is secreted by the organism to provide shelter. However, the outer covering of corals does more than provide shelter - it actually helps refract the light in a meaningful way to improve the photosynthetic efficiency of the dinoflagellates: 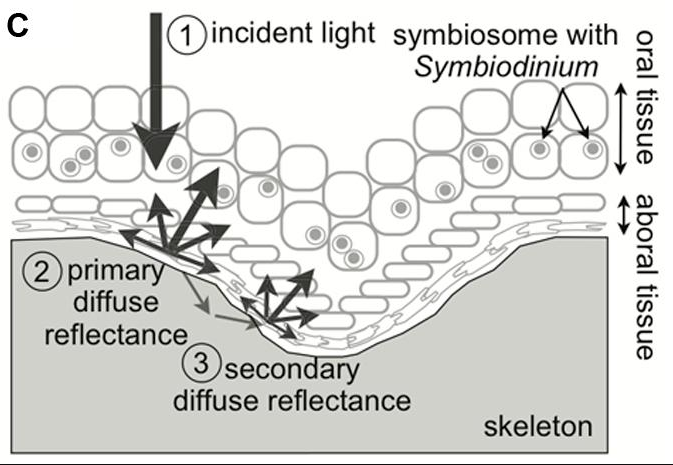 So, we can be assured that light will pass through the external covering of calcite and may actually help out the coral. This transparency also means that you'll lose a little bit of the "looking like a rock" aspect, but if you've ever seen "massive" corals they look almost exactly like rocks anyway: 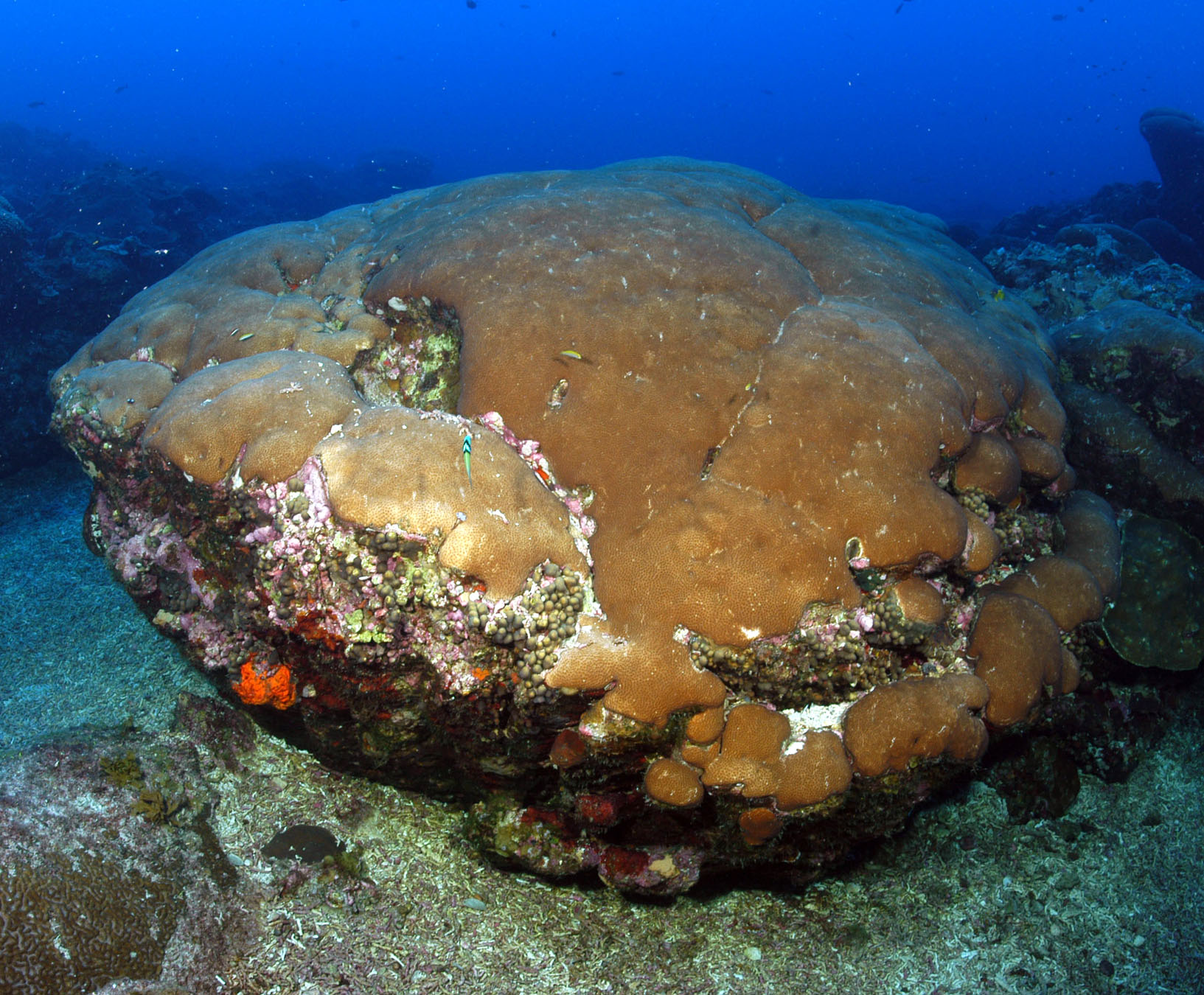 Use sugar for the internal crystals: 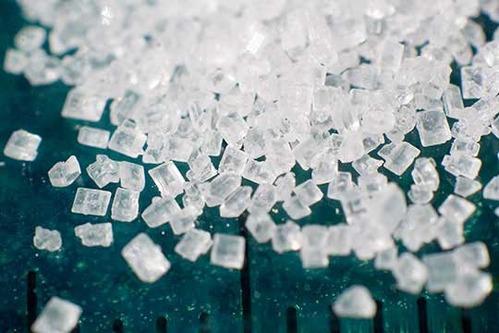 Now, this is a bit of a cop-out answer. Sugar isn't normally considered a "crystal", but it's almost perfect for what you're going for. Sugars are produced naturally by the photosynthetic processes, sometimes in excess with respect to the nutrients available. However, a sugar crystal does indeed store energy in a useful form, can be synthesized by the organisms, and can grow and shrink along with the health of the plant as a whole.

I personally love this idea because it sets up a fascinating mythos, in which crystals of nearly-pure sugar can be collected from these coral creatures. Candyland, anyone?

To chemically store energy in this way you’ll need a physically stable and durable crystal that can be easily precipitated and then broken down in a chemical reaction with as little loss of embodied energy as possible, high energy density is also preferable.

You'd ideally want an endothermic reaction because having absorbed the UV it will be converted into heat in the core of your land anemone but crystallisation is always exothermic, so it becomes a matter of getting maximum efficiency. I'm leaning towards something like Aluminium Carbide, highly stable at reasonable temperatures but highly reactive in water. It also has high energy density and a high ratio of Gibbs Free Energy, which is the energy you get back when you dissolve the crystal, to Enthalpy of Formation, the energy needed to form the crystal.

Pure Carbon could possibly be even better but you run into issues about exact crystalline structures etc... and non biological precipitation methods, but you could have diamond cored critters if you want to go that way, they'd be more like Earthlife though.

You should consider gems that are not completely (or not at all) opaque. https://en.m.wikipedia.org/wiki/Gemstone

The creature can absorb minerals from the soil and build its outer shell from those minerals. They are translucent and though may offer protection from UV, still allow letting in enough light for photosynthesis. I have never heard of a way to store energy in crystals, though.

If you want the coral to harness wind power instead, it can use piezoelectric crystals to convert movements from wind force into a weak electric source. https://sciencing.com/crystal-can-hold-electricity-energy-6886479.html

Not the answer you're looking for? Browse other questions tagged science-based xenobiology energy .

6
Organic Material able to store massive amounts of energy?
4
Using lasers to transmit solar energy
7
How could this flora/fauna symbiosis work?
13
How to modify bee physiology to be able to produce firehoney given nectar that is (magically) flammable?
5
Do these plants make sense in the way I want them to establish in my world?
9
How would a Dyson Swarm transmit energy to the Earth?
2
Entropy, enthalpy, and energy through rapid mitosis
23
Can the Little Prince's planet actually exist in our universe?
6
Solar-powered monster charging stations?