I'd love some science advice and facts for this question:

If they use wind power to bring up water from the ocean in the day time and spray it on prevailing winds going into land (i.e. 10-15 km from the coast using 200m high fountains), can they make it rain more in arid regions? What weather control can be done by bringing up water from the sea?

Here are some maths (probably wrong):

An average wind turbine can therefore lift 10 cubic kilometers of water every year by 100 meters.

So, if humans can atomize that much water into the atmosphere every year, for regions like Australia and the Sahara... Can't we give them a lot of clouds and rain? Essentially, wouldn't that easly humidify the coastal air to 100% year-round and generate huge masses of humid air which would cause major rainfalls? 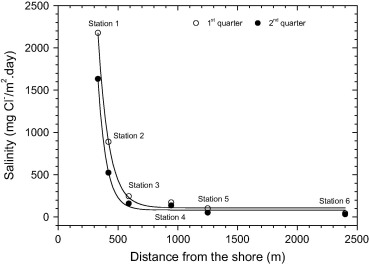 Rather than windmills, look at solar towers to send evaporated fresh water high enough into the atmosphere to generate rain: Getting large amounts of water to the Australian outback

As many people pointed out, salt would be a real killer for the project. The other factor which should be taken into account is the need for the water vapour to rise high enough to actually form clouds. If it is only being pushed a few hundred metres in the air, you are more likely to be creating clouds of fog rather than rain clouds. Pumping the vapour a kilometre into the air will ensure cloud formation, and allow the rains to fall inland.

I might as well post an answer, because there are many different things I want to address about this issue.

Firstly, as I mentioned in my comment, salt isn't exactly good for plant growth. Secondly, salt is hard to remove once it’s been saturated into the land. Using salt water to to create clouds is going to generate large areas of simply unusable land because there is no way to remove the salt without digging up all the dirt and processing it. You can't even wash it out, because that salt will flow through the rest of the land and river systems making it extremely hard for plants to grow.

Secondly, pumping water is expensive. What you’re talking about isn't 10 or 20 km. Its 100s of kilometers of piping to get the sea water there in the first place. Believe it or not, the population of Australia is pretty much entirely focused on the coast, so getting the starting pipes past the cities is going to be expensive. As you go farther out, it gets worse, because it’s harder to get equipment there, it’s more costly in terms of pumping the water and every now and again, people will have to do maintenance checks on all the equipment. If any of the salt water leaks, you've basically killed off the usable land in that area, so you need to check it pretty frequently.

Thirdly, (not sure on the exact stuff behind this, so skip this if you want) salt water is a lot more corrosive than normal water. With normal water, you just get rust due to oxidization. In salt water, you have a number of electrolysis reactions which is going to accelerate that corrosion effect even faster. Since you’re also pulling the water from the sea, you need to make sure it’s free of living creatures, small particles and so on, so that any coatings you apply don't get scratched off and the pipes don't get clogged from barnacles and what not growing on the insides. So you can't just plug a pump and pipe into the ocean and call it a day. You’re going to need to build an entire filtration plant next to the sea.

Now the solution which solves most of that would be to filter the salt water, pump the fresh water inland and use it. The biggest problem is it’s ridiculously expensive to do that compared to just pumping water out of aquifers or water tables. You can treat the water with chemicals, filters and/or boil it. In each case it consumes a ton of materials and energy to generate the water required and a ton of waste materials that will also need to be treated (filters don't last forever, you make new ones, or pump water through them backwards to unblock the holes). So you have an expensive process with an expensive distribution network when there is a cheap solution under the farmers’ feet. Desalinization is important; in Sydney we have a desalinization plant. It just hasn't been used for a while (and is costing us money), however it’s a backup plan in case things get bad, not the solution to a natural problem.

Now I finally get to the turbines. Simply put, turbines aren't going to be efficient in spraying water everywhere. They do look like giant fans, and a misty breeze on a hot day is great but they have some issues. Turbines need to be situated in areas with high winds. That isn't going to be the most of Australia. Turbines are spread pretty far apart and heavily dependent on the wind; you’re not going to cover a lot of ground using turbines... you'll get patches of growth but not the lush green fields you would imagine. The Sun is hot and so is the ground. A fine mist of water isn't going to last long enough to get deep into the ground. You might think to yourself, but I mean heavy rain, not a fine mist like those spray bottles, but simply put, there is no way to move that much water. (Think of the firefighting planes. it looks like a lot, but farming takes a constant supply over a huge area, so just because you can water your entire backyard with your hose, doesn't mean it works for a national park.)

The best thing we can do is shoot pellets into clouds to make them rain. Nature does a far better job at moving water around the world than we could ever do. Sometimes it’s too much and you get floods, and other times there is too little and you get droughts. Changing nature can cause unintended consequences (a butterfly effect) that might not show up until many years or decades later (take global warming). If it rains in one area, another area where it should have rained is missing out.

Look up the Marine Cloud Brightening Project (or 'silver linings')

The Marine Cloud Brightening Project (MCBP) aims to test the premise that spraying a fine mist of sea water into clouds can make them whiter, reflecting more sunlight back into space. The MCBP, a form of Solar Radiation Management (SRM) began with indoor development and testing of spray nozzles, and is moving toward a land-based field test in 2018, followed by ship-based tests and a larger-scale sea test later on.

One of the unknown side effects is how this would affect rain fall.

The effects of large-scale testing of MCB geoengineering techniques are unknown, but could affect rainfall in the immediate area, as well as creating unpredictable changes to regional weather patterns at a distance. For example, marine cloud brightening in the Pacific and elsewhere may lead to reduced rainfall in the Amazon basin.

Can we not just do what someone said earlier. Huge solar arrays that super heat seawater then use silver particles to induce rain. Kill two birds with one stone. Drop the sea levels. Get more water on land. Even just topping up water levels would be useful. There always seems to be this massive con. Huge problem with these ideas. Oh it costs money. Yeah so do wars and bailouts and giving the rich all this money. We always manage to pump money into things we need. We need this. Put money into it.

Edit. Ok so I was thinking about it yesterday. Maybe use graphene to filter seawater. Use solar and wind to heat the water or seawater to turn a steam turbine. Using drones to follow those steam clouds and seed them over the country. Pump night and day using any energy that is harvested throughout the day. Could also just pump water into fine mist spray to help it get into atmosphere as well.

Not the answer you're looking for? Browse other questions tagged science-based weather energy engineering .

5
Getting large amounts of water to the Australian outback