I have a character who bills himself as an explosives experimenter. He wants to try something new with explosives.

He knows how to make a bolas and has the materials to make one. However, he has this idea to make the simple bolas a little more dangerous.

In place of stones, he has hollow iron balls. He wants to fill them with an explosive substance and rig them with some kind of fuse that will trigger once the bolas have hit a target. I'm currently thinking the fuse to be triggered by a set of magnets in the bolas that, when the balls come together, have some kind of interaction/reaction to light the fuse in each ball and trigger an explosion.

Is this a good way to implement a set of exploding bolas, or is this type of weapon dead on arrival?

You are aiming for a medieval Darwin Award. And you are only the 1,000,000th person to have a similar idea with medieval explosives.

What is going to keep the magnets from triggering the explosives inside your pocket? And what happens when you let go the bolas at the wrong split second and tie your own feet by accident?

Get some IRL bolas and practice on trees for a while. It is a very effective weapon to tie animals and people, but it is very awkward to use - even more than a boomerang.

You are better served by using late-medieval explosives. Check out this other question:

Explosives in the Middle Ages

So I', not entirely sure what tech level you are wanting to work with here, but I have some pretty hands on experience with explosives (And I've only been exploded a little bit!) In any case you are going to have a lot of problems with rigging anything that doesn't risk detonating while spinning the bola above your head. Here's and idea for how you could do it with modern tech.

First, you have a hub that you hold that connects all three of the bola weights together. This hub has a safety pin and a dead man's switch. Before use the pin is pulled and the dead man's switch pressed, once released the deadman's switch will initiate a timer which will trigger a blasting cap, I would recommend that this timer be set for 3 to 4 seconds. Next, the chord that connects each of the explosive weights is actually det-chord which is ignited when the det cap in the hub is triggered by the timer. This det chord will guarantee that all 3 explosive weights detonate simultaneously.

The explosive weights are a lump of plastic explosive wrapped tightly in scored steel wire which will provide the weight as well as a convenient source of shrapnel. The problem with a solid iron ball is that it will only break into 3 or 4 pieces which does not give very good odds for producing casualties (this was actually an issue with early grenades and explosive artillery shells.) The steel wire can be encased in a thin shell of whatever you want for water and dirt proofing but with modern fragmentation explosives grenades derive their shrapnel from the tightly wound scored steel wire, not the outer shell.

The central hub contains a 4 second grenade fuse, and a pin that is pulled by a lanyard attached to the wrist when thrown, the explosives weights are still connected to the central hub by det chord (which has been in use for over a century in one form or another). I would recommend a double safety pin system where the pull-lanyard itself is not armed until the main pin is pulled. This method could be used as far back as the late 1800's without breaking suspension of disbelief. In fact, the union army actually had an experimental impact detonated hand grenade that utilized a wrist lanyard like I mention here.

Option one is that the central hub itself is the explosive with a hand-lit fuse, the device is thrown with the intent that the target is tangled up by the regular chord and counter weights and cannot free themselves before the crude black powder bomb detonates.

Ultra-low tech option two which is insanely dangerous to even carry around let alone throw is that each of the weighted balls use a mercury fulminate impact detonated percussion cap. Good luck figuring out how to spin it up and throw it without two of the balls clacking together and killing you. Also don't drop it, sit on it, touch it any less than extremely gingerly, or even look at it slightly funny. This is a VERY moody explosive device and you don't want to make it angry on accident. This is the grenade equivalent of that significant other that flies into a furious rage when you simply show up home two minutes late. Just like abusive partners it is best to avoid a relationship of any sort with this device at all costs. But, it could still theoretically work.

Either Way, This is STILL an insanely Dangerous Weapon to Use

Regular grenades are already pretty dangerous to use. They tend to bounce around a lot after being thrown and manufacturing accidents can also happen. A few grenades I've seen thrown over the years detonated quite a bit sooner than the 3.5 seconds they were supposedly manufactured for. Additionally, they tend to throw bits of the environment around like nearby pieces of scrap metal, rocks, broken glass, bone bits from the victim etc etc. I once found an AK-47 embedded in an adobe wall, god only knows how fast it had been going or how far it would have been thrown if it hadn't hit the wall. Grenades advertise a 15m casualty radius, but that doesn't necessarily mean that there is a magical zone where fragmentation just stops. A rock or piece of an adversaries gun could be thrown with enough force to be lethal out to 100 meters. This is why grenades are almost always used against targets in enclosed spaces or when there is plenty of substantial cover to hide behind after throwing. Bolas are by the basic mechanics involved in throwing them intended to be used in an open area. At the very least I would recommend that the thrower immediately drop onto their stomach and cover their head. Preferably facing away from the blast. Or jump in a ditch or something. Seriously, don't utilize explosives without either being very far away or hiding behind something. I can tell you from experience, even being blown up just a little bit really really sucks.

Use regular lit fuse. Bolas are just a delivery system, both for range, and to ensure bombs stay attached to the target until detonation.

To ensure both detonate at the same time, have them connected by the same fuse, and light the middle of it.

Magnets aren’t your best bet. The big issues with them are storage,arming and throwing, aka ‘My balls are sticking together’.

A better bet would be glassware. Small glass vials of highly reactive compounds (not sure which are readily available in medieval Europe, but your guy can readily experiment) can be put in a fabric bag around the main projectile interspersed with gunpowder and fast burning fuses. When the bolas hit a target the glass vials (hopefully) smash, mixing the volatile compounds which then ignite, igniting the gunpowder, igniting the fuses, detonating the main bomb. Experimentation with the thickness of glass should allow for a pretty safe weapon to transport that still works when thrown.

Potential downsides: might not work against soft targets, your bolas might explode when you try throw them unless you know what you’re doing.

But they’re potential problems with anything but a timed fuse anyway, soooo...

ADDENDUM: The original purpose of the bolas was to ensnare, so even if the bombs don’t go off right away the victim’s struggles to get free might set them off...

ADDENDUM: Quicklime and overproof spirits might be a nice combo for the contents of the vials: The mixture of quicklime and water can hit temperatures high enough to ignite gunpowder, quicklime was certainly available in medieval times, and a high enough alcohol content stops water preventing gunpowder from igniting (hence the term 100% proof, cheers @DavidRicherby for the correction there).

People don't appreciate when I answer with movie related examples, but...

The weapon you just describe appear in one 007 movie, maybe without the magnets which I think are completely unnecessary. I think it makes sense for it to explode with any impact, this way you can throw it against thing you wont necessarily be able to wrap around, like a car, a building or something big.

In the movie it seems that the balls have to touch each other to explode, but that makes it less efficient in my opinion, unless yo want it to explode ONLY when perfectly hitting the target 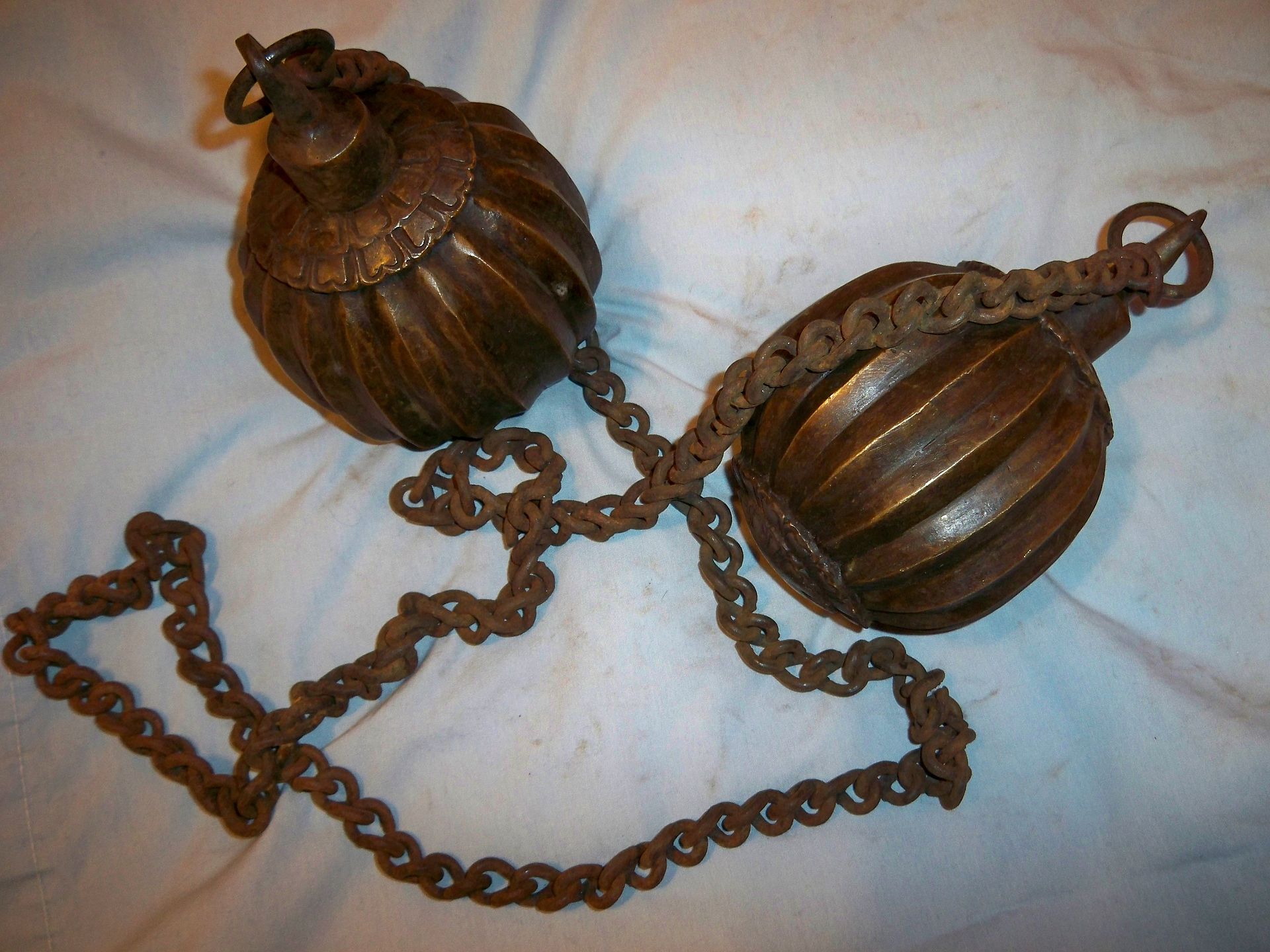 When it comes to reliable ways to ignite something, chemical ignition is great because unlike fuses or flints, they work in almost any weather condition.

Two balls filled with black powder would be a great way to send shrapnel like a grenade. Finding a way to ignite the powder already exists and was used in firearms back when muskets ruled the day.

Fulminate of mercury is a reliable way to ignite things because it is sensitive to shock. Throw it against a hard service and you get a bang. This is the substance Walter White made to throw at Tuco Salamanca in the explosion scene in the TV show, “Breaking Bad”, although a little movie magic amped up that explosion. It is prepared by dissolving mercury in nitric acid and adding ethanol to the solution.

Fulminate of mercury was also used in railroads for a device called a torpedo. If you had to move a train when switching between tracks, the engineer would lay one at the spot in the distance. When the train ran over the torp, it would break causing a signalling noise that the train had moved the appropriate distance.

I have to caution you that fulminate of mercury is highly sensitive to friction, heat and shock. This makes it perfect for a hammer strike or a blasting cap, but not so perfect banging around in a wagon. You may not kill yourself in the resulting explosion, but you may wish you were dead. In all honesty, your protagonist would be better off designing grenades, but this will give you the element ou need in your story which could have been manufactured in medieval times.

If you really want to use magnets, I propose the following:

The magnet triggers the explosion when it approaches a magnetic material. It can even be more fun if it's a strong magnet and that it sticks to the enemy's armor.

The mechanism can be deactivated, so that if no enemy is in sight, your hero can be next to metal things without risk.

Not the answer you're looking for? Browse other questions tagged weapons medieval-europe or ask your own question.

19
Explosives in the Middle Ages

2
Would it be possible to use antimatter confined by magnets as a bomb? What effect would this have on an Earthlike planet?
10
Can biological material be magnetic?
15
Would anti-personnel mines be useful in mermaid warfare?
12
What's the safest way to carry and throw marble sized high-explosive grenades?