I'm working on this map right now. Is this map realistic/believable? The continent would be about 5 million km² and lies in the temperate climate zone. (I intended it to be smaller than Australia; my numbers might be off.) . The island would be the only empire, the rest would be city-states. Caellan, Aerigoth and Roymoi are home of barbarian tribes.

There is some volcanic activity (not significant). The Wyvern Mountains are inspired by the Andes.

And are the names okay? I always struggle with names of cities, locations and so on. 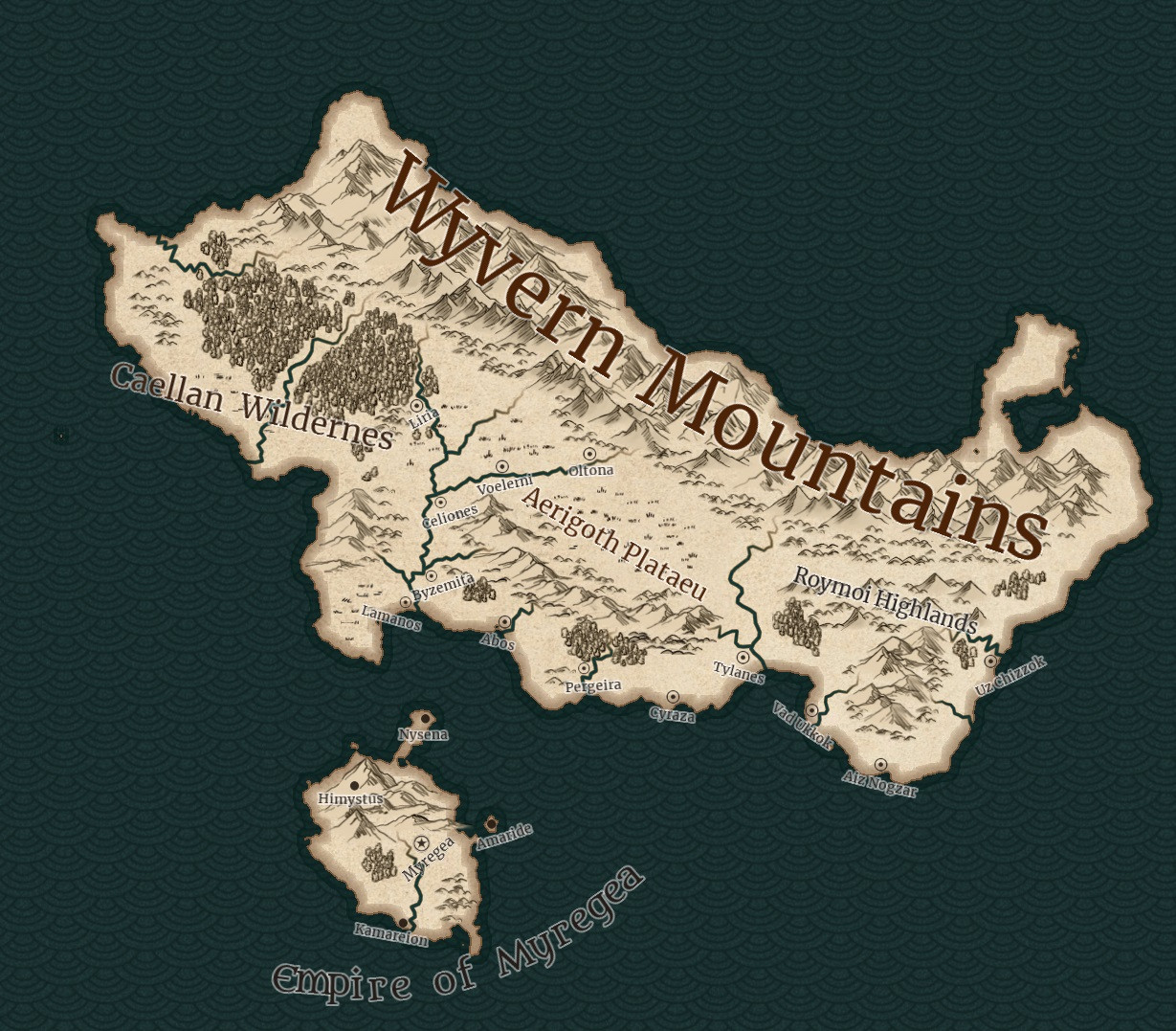 I hope I got the tags right.

I find your map to be a realistic and believable computer generated fantasy map. I'm not a geologist, but I don't see any egregious errors that can't be handwaved away because it's fantasy. In fact, I'd say it is actually very nicely composed and with a couple minor additions, corrections and some judicious decoration would look very nice folded up in a computer game or rpg box or reproduced in a novel or world compendium.

Is it realistic, maybe. I'm not a Geologist so I can only speak from observations of maps and some online research, Elemtilas' breakdown is very good but I'd just wanted to add to it.

If other examples of mountain ranges similar to the Wyvern Mountains are to be believed, such as the the Andes in Chile, where the mountain range runs the length of the continent parallel with the coastline, then they are formed by continental plates crushing into each other. It's less likely to have a nicely rounded end to each side of them. It's more likely to draw out to a point, perhaps something similar to the below, 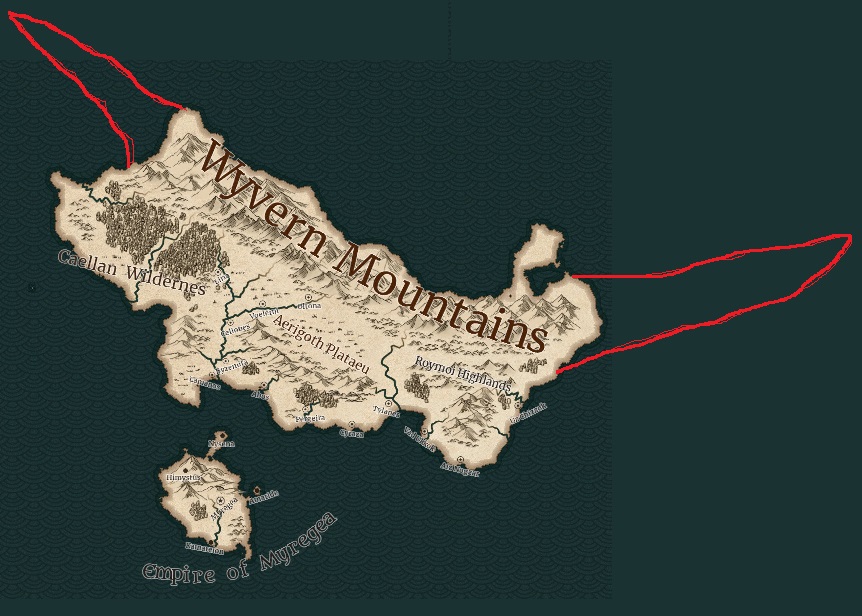 Understand that artistic license was heavily used in the past in terms of map making, for example the below picture illustrates The difference between a medieval map of the English coast around the important harbour of Plymouth, and compared next to it is the real life google maps image of Plymouth.

The Old Maps are there to offer details of the town as well as possible landing and mooring regions for an enemy invading force, and scale is not as important in the less tactically significant areas.

Whereas after the invention of newer map making technology, a Theodolite allowed them to make very accurate measurements. These older maps that showed mostly defensive information became obsolete.

Why is this important

It depends on in what timeline these maps were made. if it were the older style then as a basic map of the entire continent then its ok. Not perfect, but ok.

Your map looks like it came from an online generator, where you plan out the shape and basic terrain features then add names and notes. The issue with those generators is that the don't do coastline very well. The features of your map appear to be in the classical- fantasy style in terms of mountains and forests. However the coastline is not, cliffs etc should be more pronounced on a map of this style, irrespective of scale.

Please understand I'm not criticizing the use of the online generators, they work well enough in general, and realistic looking maps are very very hard to achieve. I've tried numerous times and they still look worse than the online generated ones.

Aside from the points here, the other answers have you covered, so I won't repeat the answers of other users.

If you want a more modern looking map, then scales are off, but so is style. the same rules apply as stated by Elemtilas

I haven't personally found any decent and free software to help you create them, but have had moderate success (at least compared to my other attempts) with layering in Photoshop to build up contour lines, but it is a long long process.

Based on your answer above (bear in mind I am neither a geologist nor cartographer), and considering several factors such as the climate and land size (approx. 2.6m sqm less than Australia in comparison), you may want to put in a bit more variation on it. Variation such as more forests, swamps etc. Your central landmass area seems to be dry with just a few rivers going inland. If it is deliberate then it's fine, but a lake or two may be more desirable and sensible.

Better than many maps I've seen. Overall it lacks detail.

I remember a time when reading about a horse and camel powered city in the middle of a barren desert. Doesn't happen. No food.

Solution: Read a bunch of articles on the Geography of X. This will help you see what is important in real countries/islands.

Another solution is to take the map of an existing continent or large island, and modify it a bit. Stretch it here or there, flip it north for south. Do this in an application that has layers. Build up the layers of the real continent (water, forest cover, agriculture, roads, railroads etc) then do your mods. Now turn off most of the layers. But you have those layers later as time passes in your world.

Broadly, a wholehearted "yes", from an aesthetic perspective. Nice! Strongly agree with @elemtilas's point 4 - reduce the type size, compensate by kerning more loosely, and consider all caps for some classes of landscape feature. Perhaps also increase the outer glow/halo.

The specific point I wanted to mention from a cartographic perspective is that the names for towns/cities would normally be horizontal. Labels for point features normally would be, whereas labels for linear features or areas often follow the line/shape of the feature itself.

It looks decent, though I agree with Blade that the mountains suddenly stopping side to side is odd. At most they should continue into the ocean to form either lowlands that aren't inhabitable, seasonal land, or a natural harbor/barrier for ships. Think Florida Keys. Or Indonesia. (Be sure to turn on satellite when using Google Maps or a similar program...the color changes indicate depth.)

I bet the fishing in low depth areas is phenomenal, which may change where your cities are. Some will be processing centers where the boats go.

You've done well to place all the cites at potential ports (on the coast or along rivers).

As for the labeling, I can't tell what those brown circle things are. Some of the names are huge but then I can't read the city names at all (on a 24" monitor!). I'd also add color to indicate terrain and/or elevation and/or population (there are many ways to do it).

Not an easy thing to do!

The map looks good to me in general. Here are a few things I noticed that can be improved:

I'm finding it hard to believe there wouldn't be any rivers flowing from the mountains into the ocean. Precipitation is generally caused by moisture and lift; your map appears to provide plenty of both. The only explanation I can think of would be if the wind never blows from the ocean into those mountains. That seems unlikely.

A minor improvement would be to add a bit more "clumping" of cities here and there, as they're currently quite uniformly distributed.

For example, I'd move Cyraza either closer to Pergeira (sister cities, like Minneapolis/St. Paul), tucked into the bay between Tylanes and Vad Ukkok (making a bustling corridor like between San Fransisco and San Jose).

As far as fantasy maps go, it's pretty good, though that single forest on an entire Australia -sized continent ruins the sense of scale.

And that mountain range adjacent to water up north looks like an edge of a tectonic plate. The entire west coast of Americas is the edge of tectonic plates, see how it doesn't drop straight into the water on ends and rather has peninsulas and series of small islands.

Not the answer you're looking for? Browse other questions tagged reality-check geography map-making names .

9
How realistic is the geography of my map?
6
Could I get some guidance on this map in progress?
1
How plausible are the terrain and land-forms on my fantasy map?
6
Is my biome/climate map realistic?
6
Advice on accuracy of world map
5
Climate Map Climate
26
What would keep traders away from a specific area of the ocean?
6
How plausible is this volcanic eruption event? Dark Age without total extinction of Stone/Bronze/Iron Age people?