Is there such thing as a “one-person” door?

Imagine an evil dictator. He imprisons his enemies in a labor camp, but they never do any work! He doesn't want to torture them, or force them to do that since he is using all of his soldiers to build him a beautiful castle. Instead, he decides to create an incentive: every time you do a certain task (such as carrying 500 stones a total of one mile), you get a coin from an automated machine. If you get some huge number of coins, you earn freedom!

The only problem is that he needs a door to release exactly one. He can't afford to send a soldier to guard the door, so he needs a door that will allow exactly one person to go through when a token is deposited into a coin slot. This is going to be based off of medieval-style technology, so no complex scanners or anything electronic.

I have thought of:

I've wondered about this for a while, just out of interest,

Door is not enough

If there are no guards, you can't just have some walls and a door to keep prisoners inside. I mean, what would you do? Carry stones, or start using these stones to build a ramp over the wall?

You need to have your prison on an island in the middle of a fast flowing river. Add some alligators and cliffs if you wish. It is then impossible to escape without help from the outside.

The king is not willing to pay for guards checking that nobody gets out. But, with such a setting, you could have some guys living on the other side of the river, and every day they go to the island by boat. If someone has enough coins, they can buy a passage.

The people that are going back and forth with a boat are also punished by the king, but they were part of the nobility. If they bring back enough coins to the king in the capital, they gain the right to get back to their previous status and privileges.

This way you fulfill everything you wanted:

If that's still expensive, reduce the frequency. Once a year would still not discourage them too much.

The door is narrow enough to mitigate massed attacks from desperate slaves.

Another option - a chamber with just enough air for one person that the prisoner stays in for several hours.

The prisoner puts the coin in the slot, door opens. He steps into a tiny phone booth sized room. Door closes (and seals). He stays there for six hours - or for however long the air there would last for one person, but not two. After which, a door on the other side slides open. You'd include suitable mechanical checks to ensure that only one door could open at a time.

If two people try to fit into the room, they'd both suffocate. (And truth be told, some prisoners who are freed may die if their oxygen consumption is too high because they are too excited. But, them's the breaks.)

The evil dictator would have to do a lot of experiments to get the proper size of the room that balances out maximizing single prisoner survival and minimizing double prisoner survival. Many brave 'volunteer' test subjects would die in the process. But that's a small price to pay for the glory of the empire.

Additional thought: To handle, in an automated fashion, those prisoners who die during the process and don't exit the room after the wait time is up, you could have the 2nd door actually be the floor. After 6 hours the floor drops out, dispensing the freed prisoner into a river below*. This way the other prisoners would never see a dead body of someone who was freed but suffocated.

(* - you'd want a river so that bodies don't pile up below the door, plus it offers a soft landing)

Kind of building off a few answers: You insert coins that drop them onto a scale. The counterweight keeps the trap door closed, if there is not sufficient counter balance in coins the trap door is opened and you can't walk to the exit. When the exit door is opened, the scale is tipped and dumps all the coins off it and resets the trap door.

A variation on already suggestion solutions combined with my own ideas

That gate or the closed path after it is on high ground. Then you enter a room with a see-saw mechanic. This starts a 2-3 day water clock that locks you in the room. During these days the water supply is limit meaning that a normal 'healthy' person could survive but not 2. (maybe 2 kids can). It's similar to limit air supply but less air tight issue/ reset issue/ hyperventilation issues.

As an extra you could add a 6 hour waterclock that starts with a loud bang and opens the floor. But giving locked up people the time to grab onto some foothold. If they aren't strong enough or have passed they fall in the river below.

Double Bonus the fallen bodies get carried by the river to the lowerground where the camp is. People will catch on that if 2 enter none survives and if 1 enters they probably most of the time will.

Prisoners collect coins to buy an antidote for a poison.

The door that leaves the prison is left unlocked. Anyone can leave but they must walk through a long tunnel filled with a poison gas. Only people who drink the antidote survive the tunnel that leads to their freedom.

A flask of the antidote only contains enough for a single person.

Exiting requires you to submit an identity token AND the required coins in two separate slots.

I think that in order to find the answer we should be thinking out of the box. It shouldn't be about a smart sophisticated system. It should be about synchronization and the psychology of the enclosed enemies dying.

If the risk of both dying is high then the imprisoned will not even think of trying to escape. Since they do not do any work in the camp they will prefer to wait until each one has its own amount of money necessary to leave normally. Anyway, they are not being tortured or forced to work inside the camp. As such they will probably prefer to delay the escape to do it safely.

Now, think of a system that permits one 'even' over-sized person to pass. Someone (in previous post) posted the following image which I like for such a system. 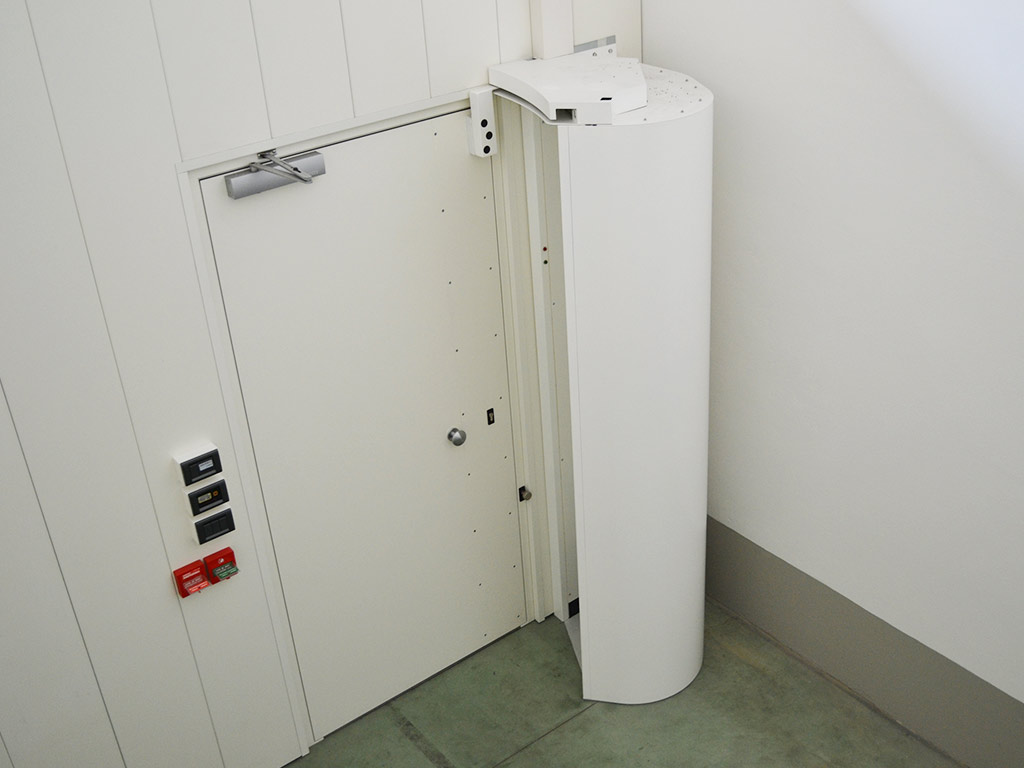 The system should be having the following ability. If the door after opening does not close within 2-2.5 seconds, then a guillotine falls and kills anything inside the enclosure. The time of 2-2.5 seconds is enough for someone to open the door, enter the tiny enclosure, close the door and leave if s/he is fast. But, what about 2 people trying to escape together? The added overhead of the synchronization needed to complete successfully the mission, should theoretically kill them.

Even if there is a chance that the door does not kill them, then just the psychology of having increased chance of dying should stop them even from trying.

Basically, the solution to the problem seems to be about the possibility (mathematically) of surviving.

I know you said medieval, but this might require a bit of "Rube Goldberg" technology...

Just beyond the door is a pit full of poisonous spikes. There is no way across the pit except for a stepping stone in the middle just wide enough for one foot. Stepping on the stone causes the door to slam behind you and there is no space between the door and the pit. This way, anyone waiting for you to get off the stepping stone so they can use it will be knocked into the pit.

As an added bonus, any weight on the far side of the pit also causes the door to slam closed, in case some particularly athletic slave tries to jump over the stepping stone to avoid triggering the door close mechanism.

If you want to be evil, then be evil in the real way. The door is just a concept. It does not really exist as a door. Rather, it is in the shape of a gun, and one token pays for exactly one bullet. 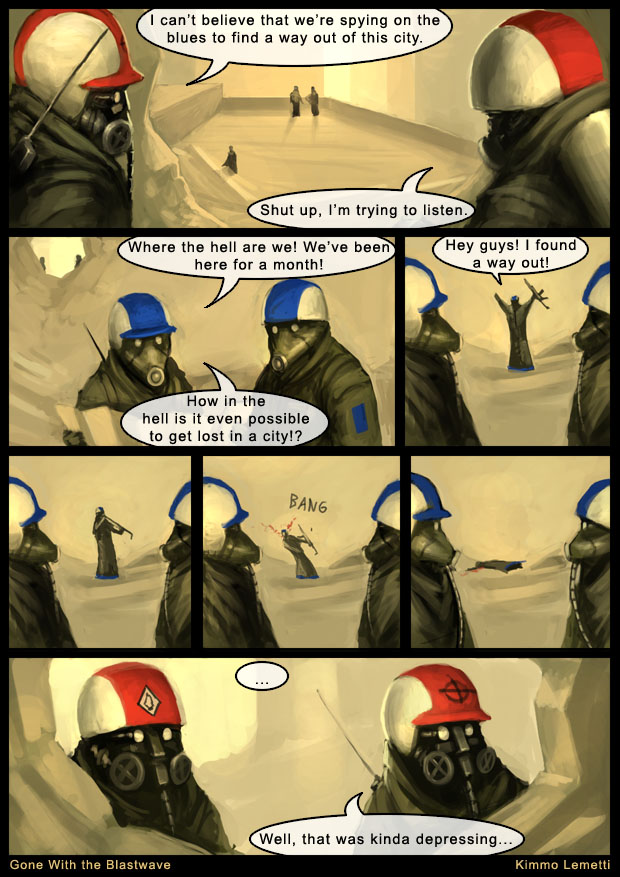 This being a medieval setting, you can replace the shotgun with a crossbow if you are not into gunpowder.

Have two separate groups of prisoners, Red and Blue.

The two groups are isolated and to buy one of the other group's currency it costs 10,000 of your groups currency.

Merchants come and go every so often, they trade in the correct currency for the group their trading with, they then trade their red/blue earnings with the dictator so currency self circulates.

Thus the one person door is the other groups desire for freedom.

29
How big could a living thing be?
40
Where could a person from the 14th century appear such that they would not notice modern technology for a week?
4
Write once perpetual storage, is such a thing possible?
1
How can one manipulate elementary particles to make a person live forever?
7
How to maintain a closed environment for one person for a long period of time
1
is there a scientific way to extract memory from a person brain into video?
2
How could a person correct their vision with limited technology?
9
How long can a wooden door last?