Why would anyone light campfires in The Zone of Alienation

The game The Zone in S.T.A.L.K.E.R. is set in modern day Ukraine and Belarus. In the story, a power surge at a research facility causes the explosion of a reactor.

The area around the site is abandoned, and it becomes filled with mutated humans and animals, and hostile factions.

Why would you light a fire in this area?

Making a campfire would make you and your group more visible, especially at night.
I don't think in reality soldiers in war zones make campfires.

We can argue that the mutants could be afraid of fire, but what about the different factions?

Should The Zone be re-imagined as a less hostile world where kill on sight is not so prevalent as it is in the game? 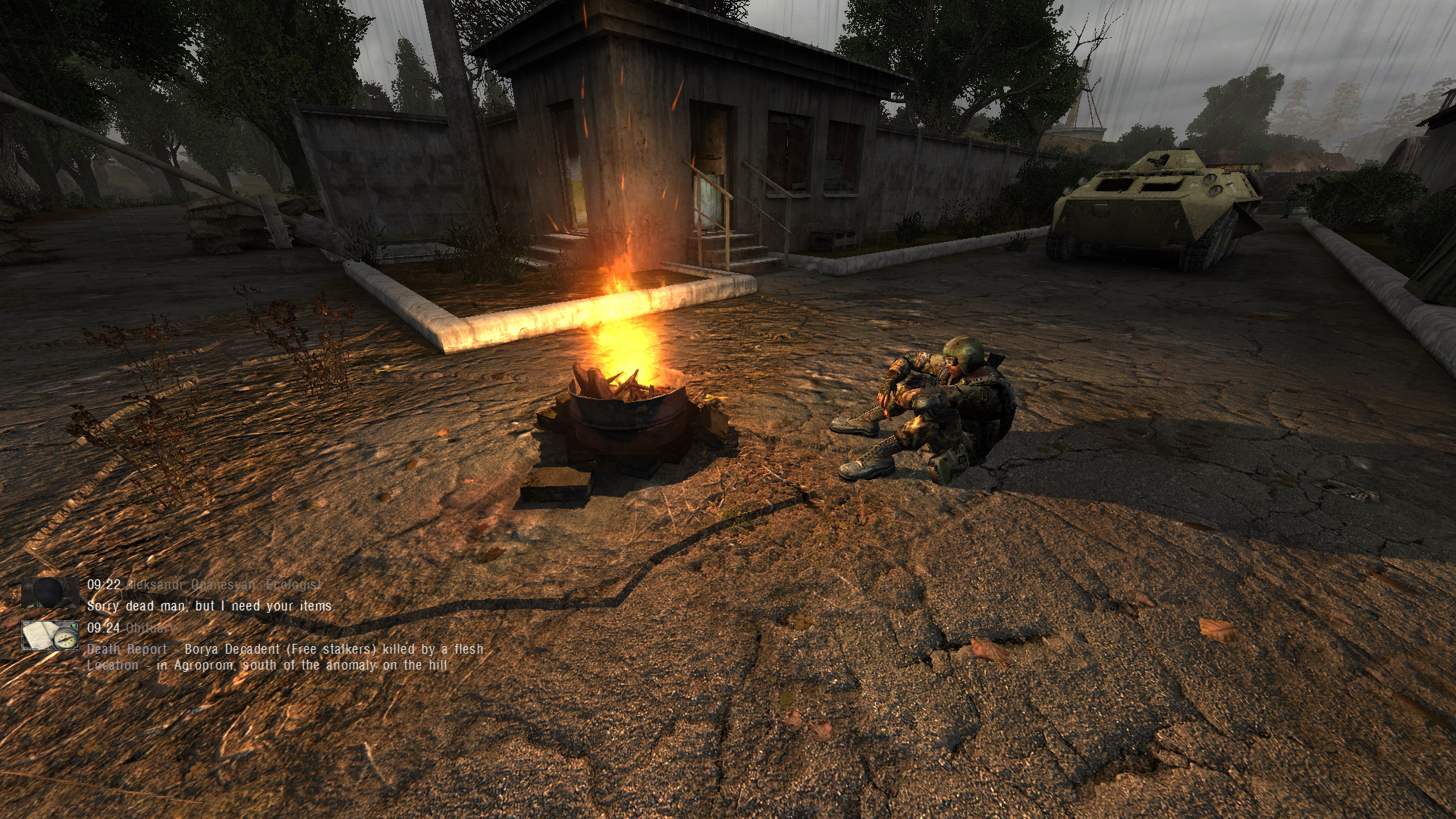 People would light fires to establish ownership and keep others away.

There are of course innumerable survival reasons why fires are good (it's pitch black, probably cold, and there aren't a lot of other ways to cook food or clean water). Animals don't tend to be enamored of them either. But the most important factor will be warding away other people.

Put yourself in the position of someone moving around who might spot one of these campfires. You're moving around after dark, which implies you're in something of a precarious position as it is. Humans aren't very well adapted to the night, and we're usually better off staying put unless there's no other option. (Except in deserts, but even then you want to move around sunrise and sunset when there's some light.)

Now in the distance you see a fire. Assuming it's not some sort of wildfire, you know exactly one thing: somewhere in that vicinity, there's at least one human. You don't know if it's one or twenty. You don't know if they have someone keeping watch, or if they set alarms or traps. You don't know if they left for a couple minutes to take care of some chore, only to be walking up right behind you as you approach. You have no way of being sure. All you know is that this ground is taken... and there's plenty of other safe, dark places all around where you have no particularly elevated risk of running into people.

Most humans, especially in this sort of survival setting, are terribly risk-averse. (Actually, we're risk-averse all the time - even though in modern life it's usually bad for us - specifically because it's a survival trait in the wilderness.) They will opt not to start a confrontation that they have every reason to believe will end badly for them.

On the other hand, if the camp had no fire, then you wouldn't see it until you were right on top of it. At that short range, neither you nor the other(s) have any time to think or react, and your instinctive reaction could lead to them being shot, or you being shot, or both.

With that said, rather than light up in the middle of the street like that dapper gentleman, I'd look for a building with a couple of walls still standing at the very least. It's safer and it keeps the wind off.

You need fire to make something. 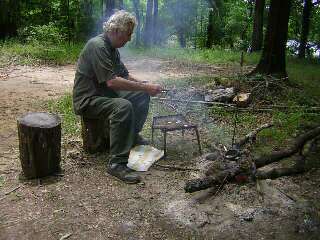 http://www.castbullet.com/reload/campcast.htm Maybe you need to cast bullets, like this gentleman is doing. Maybe you need to boil water so you don't get dysentery. Maybe you want to cook the meat of something you found dead, because you learned your lesson last time.

In any case, it would make sense to do this during the day if you could. But maybe you didn't get the chance.

Stupidity would be one reason to light fires, another would to be to light fires as a trap (some sort of ambush) for those who are looking to kill you. Also, if it gets cold enough at night (you would die of hypothermia without a fire) that would be another reason to have a fire.

You could just make it so that it is so dangerous at night without a fire that the danger from other factions is lessened due to the fact that the mutants (who are afraid of fire) would get them before they got to your campfire.

Soldiers have always lit fires at night. To heat or cook food, light to see by and many other things.

The key is that the sentries don't, they are quietly sitting out in the dark facing outwards with good night vision. While attackers night vision gets impaired by the fires.

They have also been used as traps and tricks. Whole armies have left their fires going and decamped in the middle of the night, other times each soldier has lit two fires to make their force seem larger.

Unless you're sleeping in your war gear clutching your weapons every night, it makes sense to have light so you're grabbing your gun/spear/bow instead of scrabbling around and then grabbing a broomstick.

Not the answer you're looking for? Browse other questions tagged reality-check warfare survival stealth or ask your own question.

9
How life in a neverending war zone would look like?
32
Can the US military seize a country which has the ability to kill anyone based on the victim's name and face?
15
Would Elephant Bird Light Cavalry be feasible?
5
What would be the ideal weapon for a light-combat tank?
4
What would happen to a human dragged quickly from the surface to the mesopelagic zone?
6
Visible light from the brain
47
What would be the consequence of a traffic light system where the users with green light pay the users with red light?
2
Shadow People - where would they go in cloudy weather? (not the movie)