How could flightless dragons survive in a world with advanced firearms?

Warning: large pic ahead, scroll down for the text 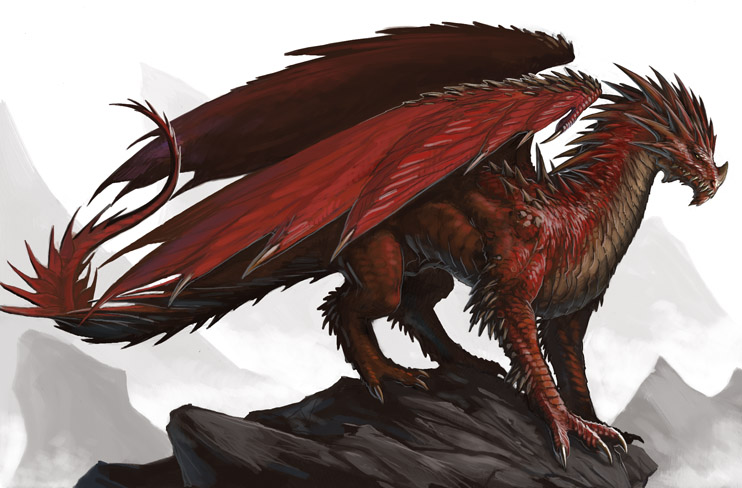 So, dragons are powerful when played cleverly, but their size is extremely problematic when facing modern-day firearms.

What can a dragon do to survive, say, a sniper attack (Mosin-Nagant ( decent scope), primitive camouflage), assuming he already realized there's someone trying to shoot him.

The most effective tactic for the dragon here would be a smokescreen, kicking up dirt and breathing fire onto the ground to mask its position. Though useless for flight, their wings sound decently suited for swirling up a cloud of smoke and dust. (Telekinesis isn't allowed in this hypothetical, but if it was, it might be able to assist this through slight manipulation of air currents.) Obscured by the cloud, the dragon can safely find cover and decide what to do next.

It seems to me that about 13,000 years ago there were many species on Earth that were approximately the size that is described.

At the present time many of those species are extinct, in many cases as a result of hunting by humans and many others still exist and are listed as being endangered to various degrees - or not.

So individual dragons might not have any way to make themselves absolutely safe from hunters but it is possible that various factors that have helped other species of the same size survive will also help dragons survive.

The best way for dragons to stay alive is to become domestic.

Let themselves be put in zoos even. (If really necessary).

You could take your dragon camping, and he would offer serious protection against bears and wolf packs.

Now the humans won't attack them at all, and even feed them.

They will even get treated by vets or etc.

If some humans decide to use them in war fare, they will armor them against regular bullets with plate armor or etc.

After that as long as they don't attack or kill they will be in no danger at all. Also with such high intelligence some of them might even be able to do valuable human type jobs. Maybe even scientists.

One big question, with all this intellect can they talk? (Even if we don't currently understand their language). Anything as smart as a human can be taught a language or we could use computers AI to figure out their language.

Pick a remote island, and they all stay there and don't bother anyone.

TrumooChees's Answer relies on a surrounding full of soil or sand, and is best to use when available since it has the highest chance to evade a sniper attack.

I'll be using ostriches and cats in my example, and using a urban setting during the attack.

They can use their wings, like ostriches, to execute high speed zig zagging maneuvers while using their tails, just like cats, to increase their balance while turning, making them harder to shoot at.

Enhanced skin camouflage seen on chameleons, as they are lizard like creatures. For better results, something like octopus, that can also mimic texture. It wouldn't depend on the terrain as they can mimic any.

After being spotted, it's hard for every existing creature that we could reference. The best option would be the smoke screen as TrummoCheese already stated. Let me add just this, they could be able to regulate the amount of oxygen on their breath and exhale a dark dense smoke that would cover a large area.

Your dragons are smart. The only reason they might not be technologically on par is because they dont have the numbers or society to divide the labor like humans do. So the first thing they would try would be to simply integrate into human society. They are smart, big and strong so they would have no problem finding work in construction or farming or other labors. Their limited telikinesis also allows them to do labor that needs finesse without the hands obscuring the view or needing equipment like tweezers to work.

That said, the dragon will eventually find himself under attack, and it doesnt have to be a human with a gun but could just as likely be a dragon when they integrate themselves. Since the dragon isnt armed his best bet is to make a smoke screen by setting things nearby on fire and running away. The gunman (or gundragon) wont be able to simply give chase as the dragon could hide and surprise him, which is historically why a fleeing person/armygroup is unlikely to be killed as the risk of chasing is too high. The dragon then goes and looks for weapons for himself, or looks for armor plating he can place on his wings (since he can glide each wing can carry about half his weight in armor) so he can get in close. Put some Razor edges on those wings and start swingin, biting and clawing...

Not the answer you're looking for? Browse other questions tagged science-based dragons tactics or ask your own question.

182
How could dragons be explained without magic?
14
How would knights train in a world with rideable dragons?
18
Tactical Advantages to Dragons with Riders
15
Could dragons theoretically breathe alcohol based fire?
3
How could dragons run?
4
How could my society potentially “de-claw” dragons in order to work with them safely?
2
How could dragons use their forepaws as hands?
10
How can my dragons follow your movement with their eyes?
0
How could dragons and gryphons reduce their hitbox?