As far as fiction is concerned, plasma weapons look better than modern-day metal weapons. However, I'm curious about their functionality in reality as depicted in fiction.

What mechanism will allow a plasma blade to melt a bullet before it can pass through the blade itself?

The mechanism I'm looking for should include answers to these.

So here is some math. We are going to assume the bullet is a 9mm projectile made from pure lead. (Yes, bullets aren't made from pure lead much anymore, but for ease of energy calculations I will posit that the bullets are pure lead) Since bullets travel very fast we are going to assume that your plasma sword is transferring enough energy to the projectiles to vaporize them instantly.

The latent vaporization point of lead is 177KJ/mol, 1 gram of lead is equal to .0048 mol of lead. A typical 9mm bullet weighs in at 8 grams. this gives us .038 mols that we must convert from a solid to a gas. This will require 6.79kj of energy. This means that the bullet will not so much vaporize as explode in your face with the equivalent of about 2 grams of TNT. Not exactly catastrophic, but you might lose your eyes. Maybe ought to be wearing some protective equipment and definitely would want to avoid breathing any of the vapor.

But lets say you are vaporizing a bigger bullet than a fairly small 9mm projectile. Lets say its a .45 ACP which weighs in at 15 grams. That will be requiring 12.7 kj of energy, which means the bullet will explode with the equivalent of 5 grams of TNT, about enough to take your fingers off. As the bullets get larger you have a significantly more dangerous explosion happening basically right in front of your face or right next to your hands. Not exactly conducive to user safety. We are already pushing into the realm of loss of life limb and eyesight and we haven't even gotten into the much much heavier rifle projectiles yet. Also, these are pure lead bullets, which have a significantly lower latent vaporization point than metals like copper, tin, or steel which are all commonly used in the construction of modern bullets. A copper jacketed steel core and lead/zinc alloy 7.62x39mm bullet that is standard military issued load-out for the AK-47 is going to detonate with the yield of approximately 35 to 40 grams of TNT. Smaller Antipersonnel landmines designed specifically to mangle a persons legs contain about that much explosive in them. So when you start trying to block heavier rifle calibers constructed from much sterner stuff than our purely though experimental pure lead bullets you are going to lose an arm.

I don't really know anything about plasma physics, but I can say that even without such knowledge I would not rate this as a viable defensive method. To see what your average plasma sword user's hands and face would look like after defecting a few low caliber bullets just look up the fun accidents people have had with M-80's.

The real issue is heat transference. You can wave your hand through an open flame, walk across coals or even quickly dip you fingers into a pot of liquid nitrogen or boiling lead without sustaining any damage, despite the extremes of heat or cold being described.

Red hot glowing coals are 800C, the proper temperature for cooking meat-guess what your foot is made out of? Liquid nitrogen is -196C, and often used to freeze flowers solid so they shatter like glass in physics demos.

The reason you don't suffer agonizing burns or frostbite is the time you are in contact with the coals/lead/nitrogen is far too short for the heat energy to be transferred from the material to your body (or the other way around in the case of liquid nitrogen).

Similarly, bullets are moving at a high rate of speed, with the typical 5.56mm rifle round moving at @ 900 m/s, while 9mm bullets have a typical range of velocities from 360 m/s to 400 m/s. Obviously, handloaded and wildcat rounds can be made with velocities outside these parameters, but this gives you an idea.

Assuming you intend to melt the bullet by passing it through a plasma "blade" about the same thickness as a knife or sword blade, the bullet would pass through a plasma of anywhere between a few mm to maybe 6mm for a Katana to perhaps 8mm for an Arming Sword. The bullet will pass though the plasma in a very small fraction of a second, and there will be little to no heat transference to the projectile (and precious few microseconds for the surprised look on your face to form as the bullet passes through and strikes you).

The only work around would not be to count on heat transfer at all, but think of the monster magnetic field which is keeping the plasma together in spite of it's natural tendency to fly apart due to the electrical charges of the freed electrons and ions repelling each other, and the high velocity of the particles (shorthanded as "temperature" in the plasma state). The magnetic field "should" draw the bullet if it has a steel penetrator, and possibly deflect its path. You might also get an eddy current in the copper jacket as the bullet flies past or through the magnetic field, which may also work to deflect the bullet.

Don't forget the bullet has considerable momentum, and could continue on its path deflected by only a few degrees due to the very short interaction time between the bullet entering and leaving the magnetic field (once again, we are talking between a few millimetres and a few tens of millimetres at most). You will have a satisfied look on your face for a fraction of a second as the bullet enters the magnetic field, then that shocked expression as the bullet impacts you shoulder, rather than the centre of your chest cavity.

Overall, I would suggest that plasma based weapons are not going to be very practical in the real world. If you really want to keep from being shot, a 50 KW laser aimed at the enemy shooter might work out very well for you.... 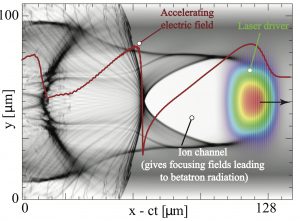 That's how it works. Moving on - the bullet? You do not vaporize the bullet. You cause it to miss, which is what you really want from an incoming bullet. You deflect the bullet by swinging your field at it and through it. Your weapon consists of a very strong magnetic field confined within the plasma blade. A conductive object (a bullet) moving through a magnetic field will induce an electrical current within itself which produces a magnetic field that opposes the original external magnetic field.

By swinging your plasma magnetic field through the bullet, you push the bullet off course with magnetism. It takes much less energy to divert a bullet than to destroy it. It is basically laser driven plasma aikido via magnets, which is the dream we all dream of.

I know you want to cut through battleship hulls with this plasma blade. Maybe that could work via ohmic heating and currents induced within the hull, just as the current is induced within the bullet. It would probably take more than one cut. I think probably it would not work at all with the dead tauntaun so don't throw out your Gerber Minimagnum.

19
How close can we get to heated blades?
11
Space weaponry?
4
A bit more effective force field
8
Weapon design: a conceivable superheated sword capable of cutting through most things
7
Signature of destruction - energy weapons
0
What mechanism would be needed to contain and inject super-heated plasma into a target?
3
100% mechanical plasma rifle
4
What would be the ideal way to weaponize plasma?