Just a fleeting hypothetical that crossed my mind. Say that no flowering plants exist. I don't know why - say a world has been terraformed with various Earth species. Bumblebees are present, but flowering plants are not. The question is -

Would Bumblebees be capable of adapting to a world without flowers, or would they become extinct from overspecialisation?

Gymnosperms are plants that have small flowers. The flowers have no special coloration or smell. If you don't count them as flowering plants (they technically have flowers, but not what we think of as flowers), gymnosperms will still be around. The flowers release large amounts of pollen into the air in the hopes that some of it will land on the flower of a plant of the same species. If these plants still exist, bumblebees would collect pollen from them as a food source. The bumblebees would collect pollen from the plants and off of any surfaces where the pollen would have landed. With this behavior, I think bumblebees would still be able to survive. Without flowering plants, gymnosperms would have less competition and wold increase in number.

In a world without flowering plants, you will still have conifers. Conifers don't have flowers. Like gymnosperms, their pollen is also blown by the wind and ends up in large amounts on the ground. The bumblebees can eat the pollen on the trees and anywhere pollen has collected. While conifers are not as common as gymnosperms or angiosperms [citation needed], they would provide a good food source for bumblebees. While the bumblebees would decline in numbers, they could still survive the loss of angiosperms and gymnosperms.

but they need nectar. IOW, pollen without nectar means no bumblebees.

Thanks to @RonJohn for pointing out that they would need nectar (emphasis theirs). I looked it up and found this article, which says that nectar is a carbohydrate. It doesn't seem to have any essential proteins or fats like pollen does (essentially empty calories), so I would guess that with a little adaptation, the bumblebees could survive without any nectar. That said, if angiosperms all die out at once, that will probably kill off all the bumblebees. 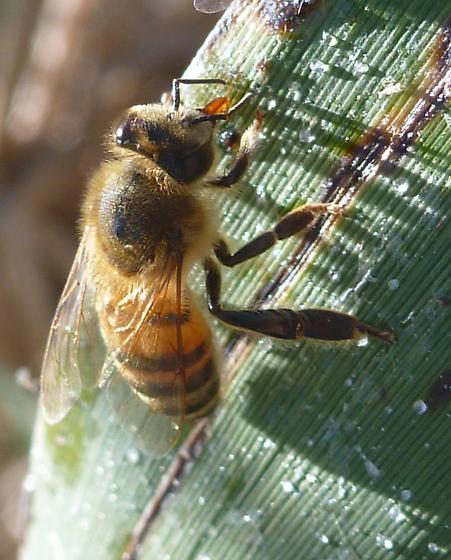 Bees drink nectar. But under some circumstances (like lack of flowers), bees can feed on the excretions of plant parasites like aphids and scale insects. That is what this honeybee is doing.

...I went outside to investigate, and discovered that the bees were landing on the foliage and unrolling their tongues to mop up honeydew, the sticky fluid excreted by aphids as they feed.

Surprised by this behaviour, I contacted the Bumblebee Conservation Trust. They told me that there is limited research on the subject, but that every year they receive reports from members of the public who witness this phenomenon.

It is most often observed in areas where there is little in flower, which could indicate that honeydew is a nectar substitute when suitable forage plants are scarce.

The "honeydew" excreted by these plant sucking insects is of great interest to ants, who are well known to farm and protect herds of aphids and the like to preserve a supply of honeydew for themselves. Like ants, bees will eat dropped sweets and honey and so it makes sense that they too would like sweet honeydew.

Aphids can make honeydew from nonflowering plants. Junipers are gymnosperms and don't make nectar. But aphids like them.

Don't avoid planting juniper (Juniperus spp.) because you noticed bees or flies on a neighbor's tree or shrub. The annoying insects aren't attracted to the evergreen itself, but to the sticky sweet honeydew excreted by even smaller pests that feed commonly on junipers.

A world without flowers might also be largely without the predators that control aphids and scale insects. If these insects are widespread, they could make bee food adequate to sustain bumblebees.

According to this article bees are perfectly happy feasting on things-that-aren't-flowers. Like insects.

Wild bees may be responding to climate change and urban expansion by relying on insects to get the sweet stuff, according to a study

The first thing to remember about bees is that there are dozens of species of bee.

There are nearly 20,000 known species of bees in seven recognized biological families.

So we've got a few varieties to play with. Back to that article:

Climate change has caused some flower species to bloom at different times than they have in the past, Meiners said. This causes a potential mismatch in bees and flowers meeting at the right time. With urban development also reducing the number of wildflower habitats, wild bees could come out of the ground to find very little food available to them.

When this happens, Meiners discovered that some wild bees turn to plant-feeding insects for food. The plant-feeding insects suck out nutrients from their host plant, and then secrete a nutrient-rich carbohydrate known as honeydew that is similar to nectar sugar, Meiners said. “We are the first to study solitary bees feeding on honeydew while they wait for more flowers to bloom,” she said. “And one of the most interesting things about this behavior is that these bees can find the honeydew without any colorful petals or scents to guide them there.”

Now, the lack of all angiosperms might play havoc on the bee populations for years, they'll still probably survive as a whole, but expect more solitary bee species and fewer colonies.

Not the answer you're looking for? Browse other questions tagged biology evolution .

10
How can I set up the environment so that my creatures don't get sick?
16
How large can an Earth species be in 2016 without being discovered?
0
What sort of animals would inhabit my world?
11
Viability of Scansoriopterygid wyverns
10
How advanced would human civilization get if it was destroyed by insects every 20 years?
7
Foraging behavior of a forest slime
5
The Serina Series: Episode I: Cats
6
How can these aliens evolve sapience without cooking?