I plan to go back in time and help Asterix and Obelix to turn the tide of Gallic wars against the romans. To achive this i will build ancient versions of our most dreaded land weapon: Tanks !

Two rows of oarsman propel the tank using pulleys attached to an oar. those pulleys transfer power to a pair of brass chains that works as tracks. Above this a group of soldiers operates a set of cheiroballistras that work as machine guns. the whole tank is made of wood and covered in metal plates.

Whats the impact of such device in a war against the Romans of the time? Is this possible for the Gauls of the time? Could a development of such device deal with late barbaric invasions? Could such devices be used as amphibious landing machines against Roman foes (supposing the Romans captured one and learned how to use it)? How can they transport such a device to a battlefield? 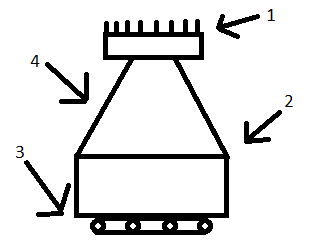 Edit : What about a vehicle carrying repeating crosbows ?

Well, consider for a moment the fact that ancient armies (ESPECIALLY Rome) used the tactics that were the most expedient and cost-effective for the time. Yes, I suppose you could offer a few new ideas to the Gauls, but let's look at the drawbacks and why it might not be cost-effective:

You say you want to power this thing using human muscle. But humans tire VERY quickly when working with such heavy weights. This "tank" will have metal plating (very heavy), built out of wood (also very heavy), and each person added to the "engine" mechanism adds their own weight to the machine as well. Then we have to add the ammunition and ballista that make up the weapons.

All of this seems like WAY too much for even the stout barbarians to handle for any length of time (meaning, this thing is going to be SLOW and have a ridiculously short range).

Ballista were effective for their time, but remember the Romans also used them. In fact, almost every ancient society used ballistas to some extent. My point here is that, despite the fact they were widely used, they often didn't turn the tide of the battle. Superior infantry/cavalry and tactics did. The reload rate and accuracy aren't good enough to turn it into any kind of war winning weapon of mass destruction.

Somewhat related to power above, one of the biggest advantages to modern tanks is the fact they can move VERY quickly across even moderately difficult terrain for many miles, especially when accompanied by a supply train of fuel. Without modern fuel and engines, this "tank" is going to be so slow, I doubt it would ever even make it to the battlefield, much less have any impact on a war.

Further, the turn rate and movement speed in battle is going to be absolutely DWARFED by even soldiers on foot. Considering the Romans were very knowledgeable about siege engines, I have no doubt they would quickly find its (many) weaknesses and exploit them fully.

Unless you can come up with a better source of fuel for the engine and make the thing faster, I don't think it will have much of an impact of a war against any faction, much less the Romans.

There is a reason that heavily armored horses/elephants were used as "tanks" in the ancient world. They had the muscle and stamina to carry the heavy loads, while keeping a decided advantage in speed over infantry.

You are basically talking about building a sort of Siege Tower.

All the reasons why your tank would not work are shown by this device. It needs incredibly flat ground to work (no way you are going to muscle-power such a heavy device up a hill), it moves really slow (due to its weight), you can't really strategically transport it (again; needs flat ground, probably cannot cross rivers) and at the end of the day it's a huge sitting duck (a wooden structure can burn, metal plates won't help unless you completely cover it, at which point's it's both unbelievably expensive and too heavy to move)

As a defender, you are much better off just building stone towers and putting your men in those. As an attacker, the siege tower might work for its specialised goal... but then the Roman's knew that, because they built them.

How to transport such a device?

Rather than making a human-powered iron tank you could simply put a wooden box with a thin bronze covering over your soldiers, hook a few oxen up inside and connect the oxen to a series of chain tracks designed to move the thing. Unfortunately I don't have time to do the math on how many oxen you would need or material. The following picture should give you a general idea of what I mean.

Is this Possible for the Gauls of the time?

To further explain, the native Celts lacked the iron working knowledge to make the tank track required. I also see in practical reason why they would go through extreme trouble of creating 1 tank when for the same amount of materials required to build it you could build ten chariots and train their crews and pay for their maintenance. Not to mention the chariot was far more effective and maneuverable.

As for building a mechanical engine I suppose you could have a Celtic guy travel to Alexandria where he discovers the Steam Engine of Hero of Alexandria. You could have him hire some engineers to come fight Rome by designing your Steam Engine-powered tanks

What impact would it have on the Romans?

The Romans were technological geniuses. They designed state-of-the-art weapons and would have most likely adapted the Gaulic-Egyptian technology to make an even better weapon. Even if they didn't, the only advantage would be psychological and even then it wouldn't be enough to scare entire Roman armies away.

Could such devices be used as amphibious landing craft?

Depends on what? It depends on whether or not the contraption displaces its own weight on the water. A real-world example of metal contraptions floating is all of modern-day ships and amphibious landing craft. Find out how they float and use that to design your vehicle. The most difficult thing to do in my experience would be to realistically and accurately describe your machine to your readers (assuming you are doing this for a story).

How can they transport such a device into the battlefield?

It depends on how you want to deploy.

For surprise attacks on relatively flat and dry terrain you could probably just pre-assemble and roll onto the battlefield. If you want to transport across the Mediterranean region and in Northern Europe you will have to disassemble and reassemble on site which raises many many many more problems, the biggest of which is how to protect the construction sites from raids.

In the children's TV show Avatar The Last Airbender the Fire Nation uses similar contraptions to protect infantry on the battlefield called Tundra Tanks. I have included pictures for your convenience. 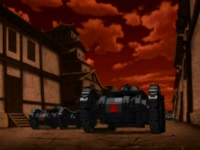 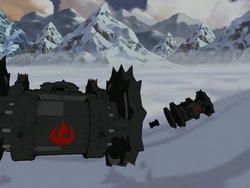 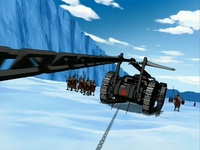 Instead of bringing knowledge of an as-so-far impossible to reach technology, consider bringing a bunch of smaller, more attainable technologies with you. I have a few examples:

Almost all of the techs from this Wikipedia page are good alternatives that are reachable.

The Germans Tiger tanks of WW2 were much more powerful weapons than the Soviet or Allied tanks by orders of magnitude. However, they also weren't able to be produced anything nearly as quickly so the Germans may have done better producing a slightly worse tank that cost less to build.

The point being, there is a real cost to building such a weapon as you purpose, one that I don't think would be worth anything like the benefit gained. The tank would move slower than infantry, certainly the calvary of the day and be massively expensive. Rome was the one with the resources, the engineers, and the logistics so that it wouldn't even matter if they were not able to directly attack your tank; they would cut off the supply route, figure out how to box it in, and then just conquer around it; or determine its weapon range, trap it, set up something with a longer range and pound it with that until it broke.

Dealing with Rome's professional standing army and military engineering wasn't something that anyone actually did successfully at the time period. Basically instead of something big, you probably want to go small and give them the stirrup and improved composite bows.

Laager or wagenburg tactics used in the past were similar to primitive tanks in some respects, although they were used defensively as mobile fortifications rather than an offensive vehicle.

If you're willing to throw out the tank treads and shed the armor plating to reduce weight, why not go with a horse or ox (or elephant!) powered wagon which is completely enclosed inside a wooden box to protect the animals. Build a turret (or at least a walled platform) on the top for missile troops. Add a scoop at the front to shunt aside the bodies of enemy infantry plus caltrops and other nasty anti-horse devices.

Perhaps screen the "tanks" with light infantry or cavalry to maximize the surprise factor. Unleashing a formation of such vehicles charging into infantry formations would cause complete mayhem.

Is this possible for the Gauls of the time? No, the Gauls though fierce fighters were not capable of designing something like this. They lacked the math skills, general engineering knowledge and the whole idea of shielding themselves in a giant box kind of went against their warrior mentality. Remember many of them liked to fight naked.

Could a development of such device deal with late barbaric invasions? No, they only thing that could have saved Rome was a strong unified Army of diverse peoples. Once Rome lost their diversity, had no one else to conquer and became a Christian empire their days were numbered.

Could such devices be used as amphibious landing machines against Roman foes (supposing the Romans captured one and learned how to use it)? The Romans already had the box formation so unless you could drastically increase the amount of protection the tank offered compared to their box formation, allow the same speed as foot soldiers had, AND avoid giving your soldiers fatigue before they even started fighting then they would not use something like to do an amphibious landing. They would probably just use small boats to cover their heads until close enough for battle.

How can they transport such a device to a battlefield? The Romans could if they wanted to by breaking it down into 2 pieces. They would probably carry(roll) half of it as a wall. It would make a for good defensive shield but would be extremely heavy even with wheels. Carrying it in two pieces would allow men to quickly come together and have them lock it with some iron pieces and be ready for battle.

Not the answer you're looking for? Browse other questions tagged warfare alternate-history history .

72
In what war would one modern military vehicle make a difference?
38
Is it plausible that a country developed steam engines before gunpowder?
15
If Jesus performed miracles today, how could we convince the people of 4000AD that they happened?