Feasibility of a Crystal Ecosystem

In my Fantasy world there exists a crevice. Plants and animals made of glittering, iridescent crystalline structures in abundance. The crevice can contain any arbitrary materials that might make the existence of such creatures, though it must also be livable for humans and exist alongside the rest of the 'normal' world.

The 'plants' look just like crystals in our world, but they grow and mature over time, eventually producing tiny crystal seeds to reproduce. e.g. A crystal like this: 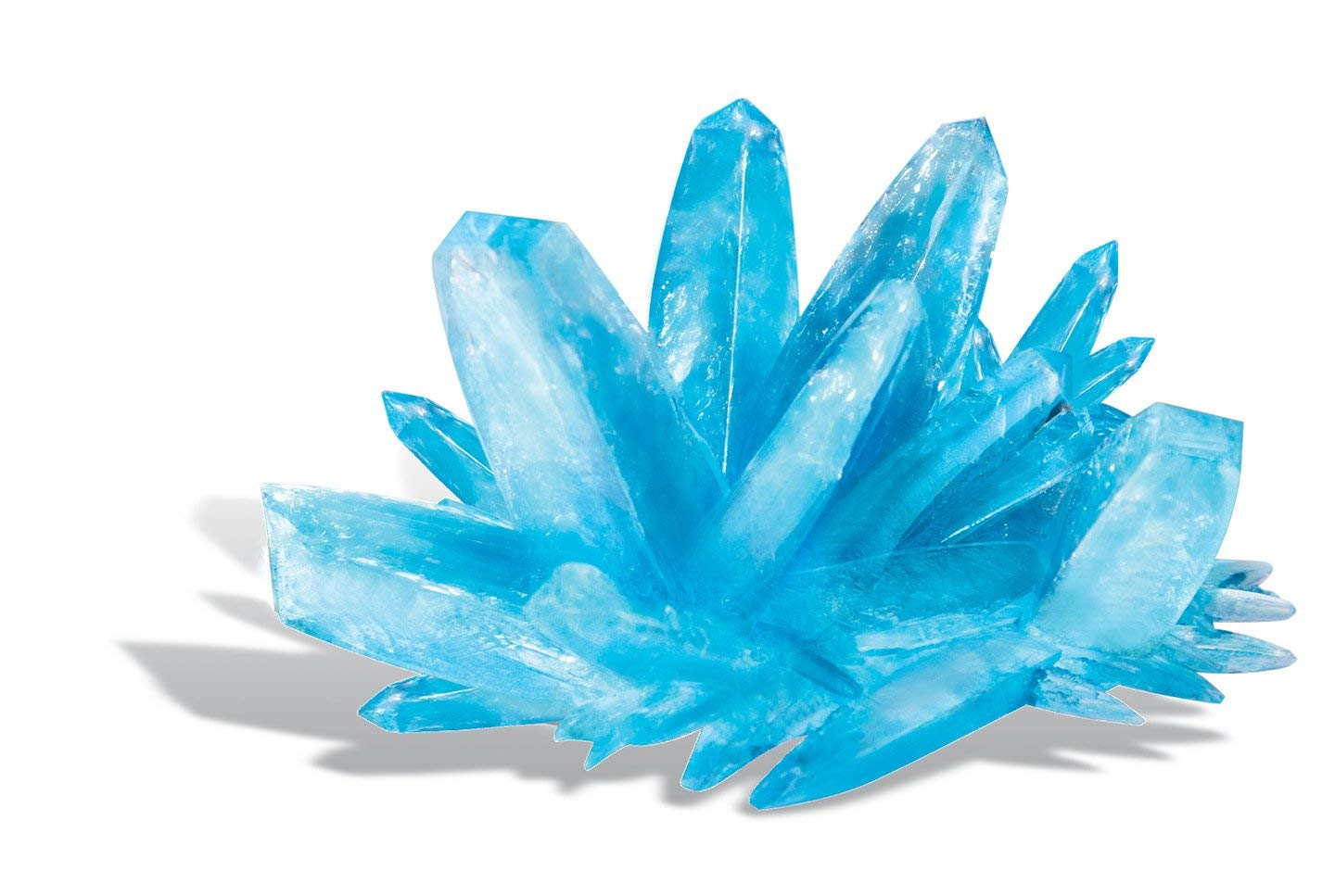 The 'animals' exist as both herbivores and carnivores. They of course subsist by preying on the crystal plants and herbivores, respectively. e.g. Something along these lines, though ideally more iridescent and translucent: 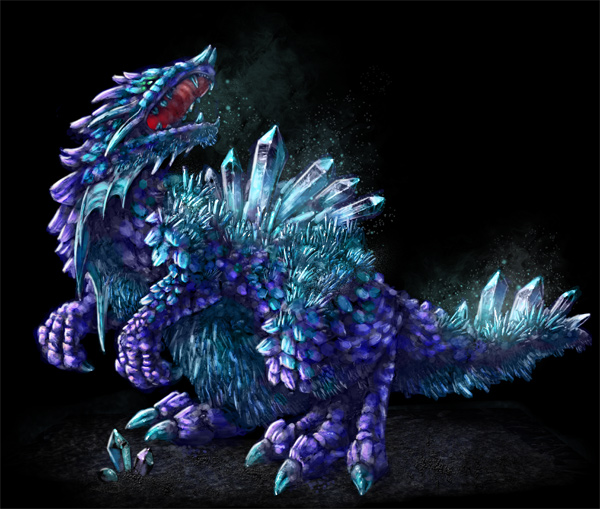 The creatures do not necessarily need to be made of literal crystals. The desired properties are that they look translucent and iridescent with square-patterned protrusions. They should be hard and smooth to the touch.

Is that kind of thing realistic? Are there any examples of real-world living creatures?

This question is for a fantasy setting which has magic, but if possible I'd prefer answers that used as little magic as possible.

Are creatures that appear to be comprised of translucent, iridescent crystals possible?

A combination of biology will do the trick here.

You can observe any of the following in nature:

You can also observe iridescence and translucence in nature such as the morpho butterfly and chameleon. Their external cells are crystalline and are structured to have beautiful spectrum of colours for visual effect. The protrusion patterns on your animals are down to evolution, predatory/prey relationships, and behavioural patterns. 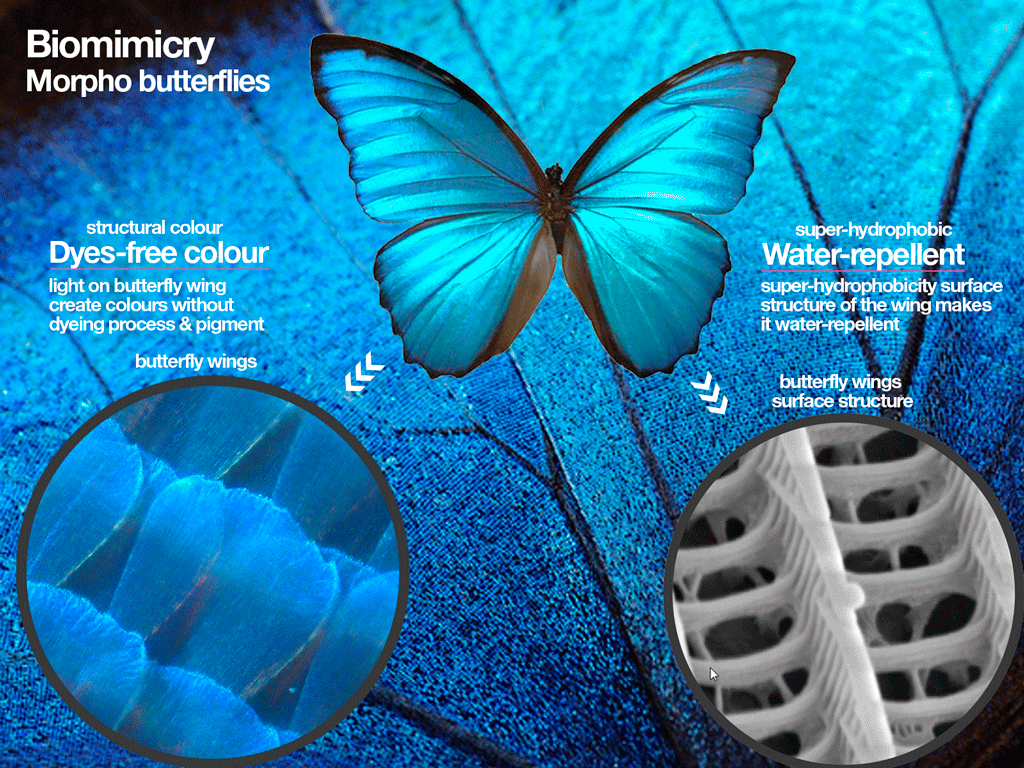 Traditional Earth Biology is based on proteins floating in water, some of it organized into cells. Large crystalline structures in animals are generally laid down by living cells, but not alive themselves Some examples :

Coral is laid down by a variety of cellular organisms which lay down on top of existing surfaces, but the organisms are not the crystalline part itself.

Bone is created by most animals, extruded from cells which then harden, and then the hard crystal part is not really alive anymore. Bones have many hollow spaces, which contain living cells, which maintain the crystal structure as well as other health aspects of the whole organism.

Scales, horns, nails, and hair are generally layered protein, not big transparent single-substance crystals. But you could scale it up if there was an evolutionary advantage.

Large amounts of otherwise-useless weight don't help a creature that needs to move. You would need to make a reason for it - perhaps it's intelligent, and the crystal holds a thinking matrix of light. That's a difficult thing to bootstrap into a biosphere. And generally brains get hidden inside animals for protection.

Carbon based life is the fact on Earth because C can bond with 4 other elements - but there is another common element which can also do this: Silicon.

For the crystal requirement: Silicon is a crystalline structure, is the 7th most abundant element on Earth, and includes many silicate units which would match your monster needs.

For the (additional) science, last year (2017) scientist Charles Choi successfully bonded silicon into carbon based molecules showing that an evolution of silicon based life is possible. The full article is available through a paywall but to quote the abstract1:

Enzymes that catalyze carbon–silicon bond formation are unknown in nature, despite the natural abundance of both elements. [...] Using directed evolution, we enhanced the catalytic function of cytochrome c from Rhodothermus marinus to achieve more than 15-fold higher turnover than state-of-the-art synthetic catalysts. This carbon–silicon bond-forming biocatalyst offers an environmentally friendly and highly efficient route to producing enantiopure organosilicon molecules.

This could be used in a story on another planet to show how silicon based life forms came to be instead of carbon or to show how directed scientific evolution lead to the development of silicon based life forms on Earth which after "horrible world altering event #178" caused them to increase in variety and strength until they became one of the dominate spieces on Earth (i.e. your plants and monsters).

There are TONS of good examples in nature that could be used as a basis for this concept, and combined with each other. The most difficult aspect is "translucent" but even that isn't too hard to come up with. With some minor "magic"(or another variation of handwavium you prefer), it's not much of a stretch to get to what you described.

Diphylleia, or skeleton flower, is a white flower whose petals turn transparent when wet.

Lunaria annua is a plant that has translucent seed pods

And Haworthia plants come in many varieties, some of which are translucent, and most of which are in a very crystalline arrangement.

Bio-luminescent fungus might be an inspiration for "glittering" plants or plantlike things. (keep in mind that some Lichen are fungus+plants in a symbiotic relationship, if you add bio-luminescence to that, and scale it up, you have sprawling and glittering plants and wall surfaces.)

For "glittering", the first thing that comes to my mind is fireflies, but then there are a huge variety of sea creatures that are also bio-luminescent. On land, most bio-luminescence seems to be bugs and bug larva, but there are bio-luminescent land crabs as well, and earthworms, and more. As a bonus, most bugs crabs and snails also have hard shells or exoskeletons, adding to the appearance of rigid crystalline structure.

For "iridescent", many snakes have literally iridescent scales, which are already crystalline both in shape and texture. Also, some snakes (and many other reptiles) have their scales "ruffled up" which would add to the crystalline appearance, look up Atheris hispida as a good example of this ruffled up appearance.

For "translucent" animals, this is by far the hardest, but there is a precendent for it, even for animals that have a hard(-ish) structure. There are glass frogs, but frogs in general aren't known for having a crystalline external structure. Fish scales are decidedly more crystalline in appearance already, and there are glass fish as well. Crustaceans, such as crabs and lobsters have a hard and stiff surface, and there are glass shrimp (mini-lobster-like appearance, but clear) that have a similar hard shell, though decidedly softer than the shells of most other crustaceans.

One final bit of inspiration that came to my mind for this question is scorpions in UV light.

In summary, real life ... life ... has plenty to choose from if you're looking for something to base fantasy glowing+iridescent+translucent+hard shelled plants and animals. Take the parts of real life that are the best for your story needs, mix them in ways that real life hasn't done, and you should be able to come up with something real-ish, but not real enough to be really real. (really)

I wonder how mechanistically you could build this ecosystem: because crystals are weird. (Apologies to any actual chemist, my chemistry knowledge is pretty limited)

In high-school science, many students grow crystals, such as copper sulphate crystals. They do so by taking a saturated solution and letting it evaporate, which forms a layer of crystals on the wall of the beaker. Then they take a single crystal and suspend it in the solution. It provides a nucleation point for which a single crystal can continue to grow. Thus, if we can have an atmosphere that is saturated with some chemical, we could potentially have the primary producers of our ecosystem without needing any actual biology or life: the crystals gradually grow as they strip chemicals from the atmosphere.

The harder part is continuing the ecosystem in this way. Maybe we could have rolling crystals that roll towards the densest concentration of some gas (they absorb it on the side closest to the gas vent making that side heavier). Maybe these "rollers" eat the naturally growing crystals, and they grow bigger and bigger until they collapse under their own weight. And when they collapse, perhaps the two halves can re-form into a ball and keep on slowly rolling?

Maybe you could use piezoelectricity to make some sort of jumping thing whenever there is a thunderstorm. Similarly, some crystals are photosensitive, so you could have some other oddities there (some odd structure that takes one step per day/night cycle?)

However, this is not biology, and is not an ecosystem. There is no complex conveyance of design (no DNA) and nothing beyond strange physical effects. Such a planet would be inhospitable in the extreme, and very disturbing to any explorers.

Not the answer you're looking for? Browse other questions tagged reality-check magic creature-design or ask your own question.

20
Could crystals grow on living things?

59
A Bird that Never Touches Ground
19
Anatomically Correct: 4-legged sapient creatures (“centaurs” etc.)
7
If thunderbirds were real, how would it affect shepherds and ranchers?
11
Stars as lifeforms – is it possible?
7
Anatomically Correct Isitoq
10
Substance that changes quickly from liquid/gelatinous to solid?
0
Feasibility of a creature that leaves behind crystal like formations
12
Is a world where all creatures are blue possible?