What sort of setup of a binary star system would allow only one sun to be "up" at a time?

I have a sci-fi/fantasy world with two suns. Only one sun can be present in the sky at a time. A full day-night cycle would be:

Is there an astronomical way to explain this?

Since people are saying it might not be possible to have a night I should mention that is my least important requirement. My goal is to have one of the suns be inhospitable to life, so people are going to be hiding indoors while it is out anyway. I could use that as a time of rest.

The most likely orbit is for the planet to circle the two star system. However in that orbit both Suns would be visible at the same time for part of each day. Another option is the planet in a langrange point of the two Suns. Essentially the suns orbiting around the planet, this would result in one sun at a time, but no nights. A third option would be the planet orbiting one sun inside the orbit of the second sun. This results in a day/night cycle, but of varying lengths with multiple suns present for much of the year, and dependent on where the orbiting sun was located.

Possibly the best option, but least likely, is a very delicate balance and results in a slow series of night, day 1, night, day 2 sequence, but only for part of the planet. For this imagine a center of orbit at 0,0. With suns at +1 and -1 on the x-axis. A planet that moved on the y-axis with the ideal rotation speed would see a night-day, night-day sequence with days being alternative suns for portions of the planet. While other portions would see a double sun, sun, double sun, sun pattern.

An option might be that the planet closely orbits let's say Sun1, while the other star, Sun2, is on a far away orbit, looking more like a very bright star than a sun.

For a good part of the year the Sun2 would appear during the Sun1 night, when of course the Sun1 would be set.

For those times when the two Suns are on the same half of the sky seen from the planet, there would a proper night, while as they move across the sky there would be a longer Sun2 day.

Yet another option would be to put your planet at the L1 Langrangian Point between Sun 1 and Sun 2, that is on the line between the two suns where the gravity of both suns cancel each other out. While this has the benefit of only one sun to be visible at a time, the drawback is that there is no night time at all, because when one sun has just set, the other has just risen.

Another major drawback with this solution is that the L1 point is a point of unstable equilibrium and any perturbation, however small, will cause the hapless planet to leave the L1 point and fall towards one of the two suns, eventually ending up in an elliptical orbit around it. This can be circumvented slightly by moving the planet in a Lissajous orbit about the L1 point but here too small perturbations eventually grow so large that the system breaks down.

It is possible to posit fourth and fifth celestial bodies in stable orbits around either sun that nudge your planet just so that the perturbations cancel each other out but the math for this is quite intractable (if you know how to solve this type of problem in a general way you have a big chance of winning the Nobel Prize).

The rise and fall of a Sun is relative to the rotation of the planet and it's axis. On Earth, there are spots where the Sun rises and falls with a Sun in the sky 24 hours per day.

So you have flexibility with the narrative of what you see in the sky.

The closer together the pair of stars orbit each other the further the axis of the planet has to lean to see only one star at a time. All of this is relative to the orbit distance from the suns, the radius of the planet and it's axis.

Put your planet in Lagrange 4

The Lagrange points (as mentioned in another answers) are points in an orbit where bodies can be "parked" due to an equilibrium in the gravital forces of the other two bodies: Here is more detail about the theory:
https://www.space.com/30302-lagrange-points.html

So, your center will be "Star 1", and around it, there will be orbiting "Star 2" and "Your planet". The planet needs to be located in the point called "Lagrange 4". With that configuration, when your planet rotates in the day-night cycle, both suns will take turns as you mentioned, and you will also have night (your night will last (more or less) only 1/3 of the rotation time, but you will have night). 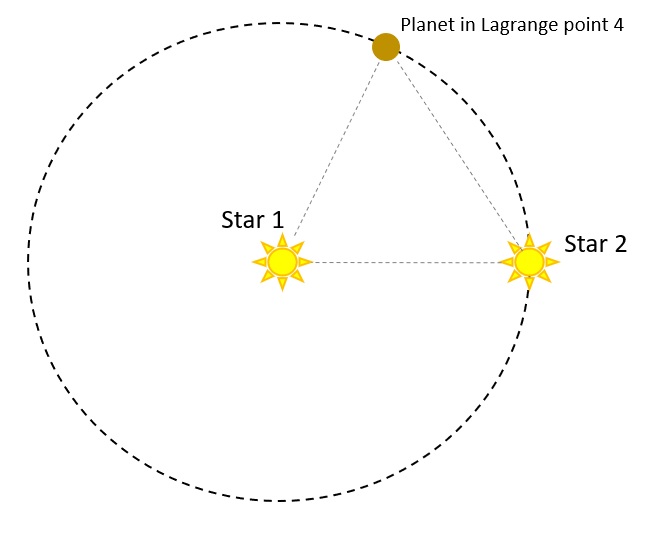 In Isaac Asimov's short story "Nightfall" which was later expanded into a novel, the planet Kalgash has eterrnal day for thousands of years at a time.

For attempts to make a realistic solar system where a planet could have eternal daylight.

AS you can see, the fact that the stars in a multiple star system orbit and move relative to each other make it very hard to create an eternal arrangement of the stars in the system.

The known orbital periods of stars in binary system range from minutes in very close binaries to hours, days, months, years, decades, centuries, millennia, and possibly for hundreds of thousands of years.

There are no known examples of binaries with orbits long enough that the two stars would have had essentially the same relative position for billions of years necessary for intelligent life to develop on a planet.

Unless it is possible for a habitable planet to orbit in a Trojan orbit relative to two stars. But in that case the two stars would be only 60 degrees apart in the sky of the planet, and thus would often be seen in the sky at the same time.

And the star passing nearby might be a lot hotter than your planet's star, and so emit a lot of very bright blinding light as well as invisible ultra violent ultraviolet light that lifeforms on the planet are not adapted to face. So the animals and people on your planet have to change their lifestyles and hide underground, or inside, or under shade trees, or cover up with clothing, when that nearby bright star is overhead, whether that is in the day or the night of the planet's own star.

This article has a list of the calculated closest past and future stars to Earth over several million years, though a passage a lot closer would be necessary for your story.

It is quite possible that in your story the passing star is not yet at its closest and the future closest approach will be deadly.

Not the answer you're looking for? Browse other questions tagged astronomy day-night .

11
Can a planet be on a stable orbit at a Lagrangian point of a binary star system?
58
How would someone hide an asteroid in the void of space so only they could find it?
5
Do stars in a binary star system fall along the ecliptic?
9
Feasibility and consequences: the cosmic dance of twins habitable moons
3
Intelligent life wiped out in a binary system with a neutron star?
4
Looking for a review of my tidally locked red dwarf planet system specs!
0
Stabilizing Synchronized Orbit
19
I want ten Earth-years long day on my planet. Can I have it?
6
If John Atkinson Grimshaw's Paintings were actually daylight, what kind of star would this "sun" be?
18
How would people detect a 1 year time jump between star systems?