Related to This question which was very open-ended, but it got me thinking about a very specific setting:

The question is how this space warfare will play out. Here are some ideas

These are just ideas; main question is how would warfare play out in general, so feel free to suggest things that I did not think about.

In general space is still expensive, so conventional warfare would be the way to go, but I digress.

Regardless of goal, the safest way to kill an enemy satellite would be to deorbit it, preferably by hacking it. We live in a time where cyber weapons are a very real thing. Just check out this wikipedia section. The USA destroyed perhaps 1000 nuclear centrifuges using an incredibly advanced piece of malware that had stealth as the primary goal (it took a very long time to figure out that they got hacked). Why spend millions of dollars on sending a big rocket into space to blow a satellite up when you can just hack it? The reason why deorbiting is the safest way is because if you blow it up, you will end up sending hundreds if not thousands of tiny pieces into space, which could potentially collide with your own satellites. Kessler Syndrome benefits no one, unless you're some sort of spacefaring anarchy nation.

To answer the rest of your questions, controlling an area isn't exactly as easy as it sounds. The whole reason why the US got involved in the Space Race was because citizens feared the USSR's capability to send satellites above the US with ease, without any easy way to shoot them down. You could shoot any trespassing satellites with a missile. In fact, the Chinese did that back in 2007 by testing an anti-satellite missile. The US also did that with one of their own satellites that had malfunctioned. Either way, doing this on a massive scale wouldn't work too well. Kessler Syndrome doesn't help anyone.

Tungsten ball launchers would work, but keep in mind of Newton's famous "an object in motion stays in motion, unless acted upon by an outside force". Should those balls miss, they might hit something or someone down the road. Perhaps it will land on someone's house (though if the balls are small they might just burn up), or hit one of your own satellites down the road. Again, you add more debris to LEO, which may also start Kessler Syndrome.

Any large debris could be tracked, so any potential collisions could be mitigated by having the power of hindsight. If we know that debris may hit us, you can maneuver the station to avoid the debris. Also you don't need anything huge to do great damage to a space station. Although the ISS has lots of shielding, anything the size of a bullet could punch a hole and cause depressurization. Take this picture of a paint fleck that hit a window of the ISS. 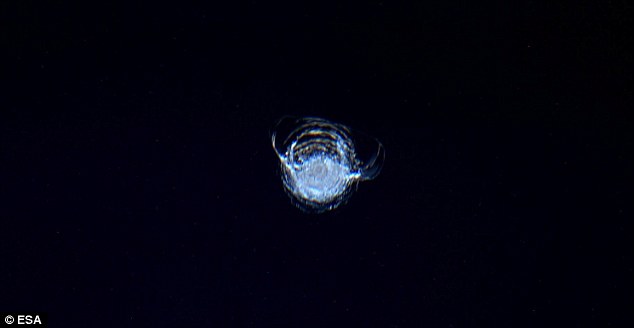 You can constantly change the space station's orbit, but that costs a lot of energy.

Not too sure about stealth satellites, that's not my forte.

Not the answer you're looking for? Browse other questions tagged science-based technology space near-future tactics or ask your own question.

59
How do I make a space battle both realistic, with physics in play such as no sound and weird motion, but also very epic and intense still?

20
Traffic in Space (a traffic controller for low earth orbit)
13
Hiding own space program
9
Death Star-esque space ship in Earth's orbit - how to destroy it without destroying earth?
1
What if aliens invading Earth turned out to be invisible?
12
Man-portable anti-satellite weapon
23
How long would it take to nuke an alien spaceship in orbit?
7
What kind of “space force” would be needed to protect space assets in the near future?
61
My perfect evil overlord plan… or is it?
0
Internet access at GEO