Materials in a tidal water world

I'm trying to create a people that live on this rolling tide (see previous question or on 'millers planet') but I haven't figured out where they would get wood to build their boats/homes. If the tide was slow enough there are some types of trees that can grow 8ft a year, so maybe have trees growing between tides.

Is having trees grow between tides the only way people could get materials?

Maybe you can get some inspiration from the Uru People that live over Lake Titicaca. They create artificial floating islands, with small houses on it, with a plant called Totora. This plant commonly grows at a water depth of 2.5–3 m (8.2–9.8 ft) but occurs less frequently as deep as 5.5 m (18 ft). 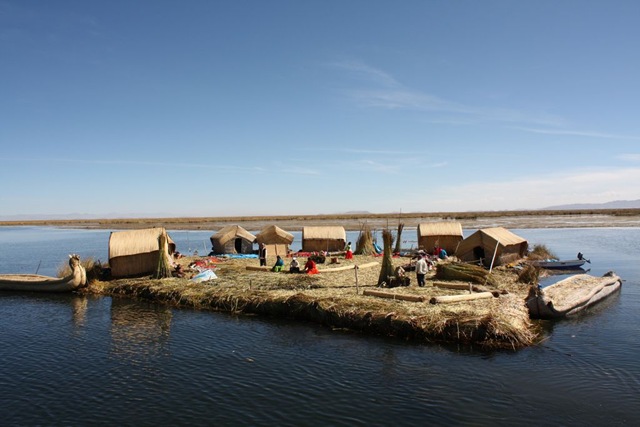 Perhaps on your world, seaweed grows up to the surface like in the Sargasso Sea. If so, that seaweed could be harvested and dried into a building material. Perhaps its natural saps form a resin which make it almost wood-like once dried. So the harvesters pull it up, and lay it out in overlapping crisscrossed layers on open topped rafts.

Weave it into whatever you want. Just make sure to get the shape right before it dries because the metal saws needed to cut it afterwards would be very rare on a water world.

The best real-world example to use here are the Inuit. They live in the coastal arctic, an area with no trees. However, they get around this by using driftwood that washes up on their shores. If trees are able to exist at least SOMEWHERE on this planet, then you can just have everyone do this. If there are no trees on their planet, have them use stone, coral, or dried kelp fronds.

Umiaks and Kayaks have been made from whale and seal bones and skin. I see no reason why a sufficiently motivated population can't scale that up, perhaps using pontoon like structures, to larger structures. https://en.wikipedia.org/wiki/Umiak 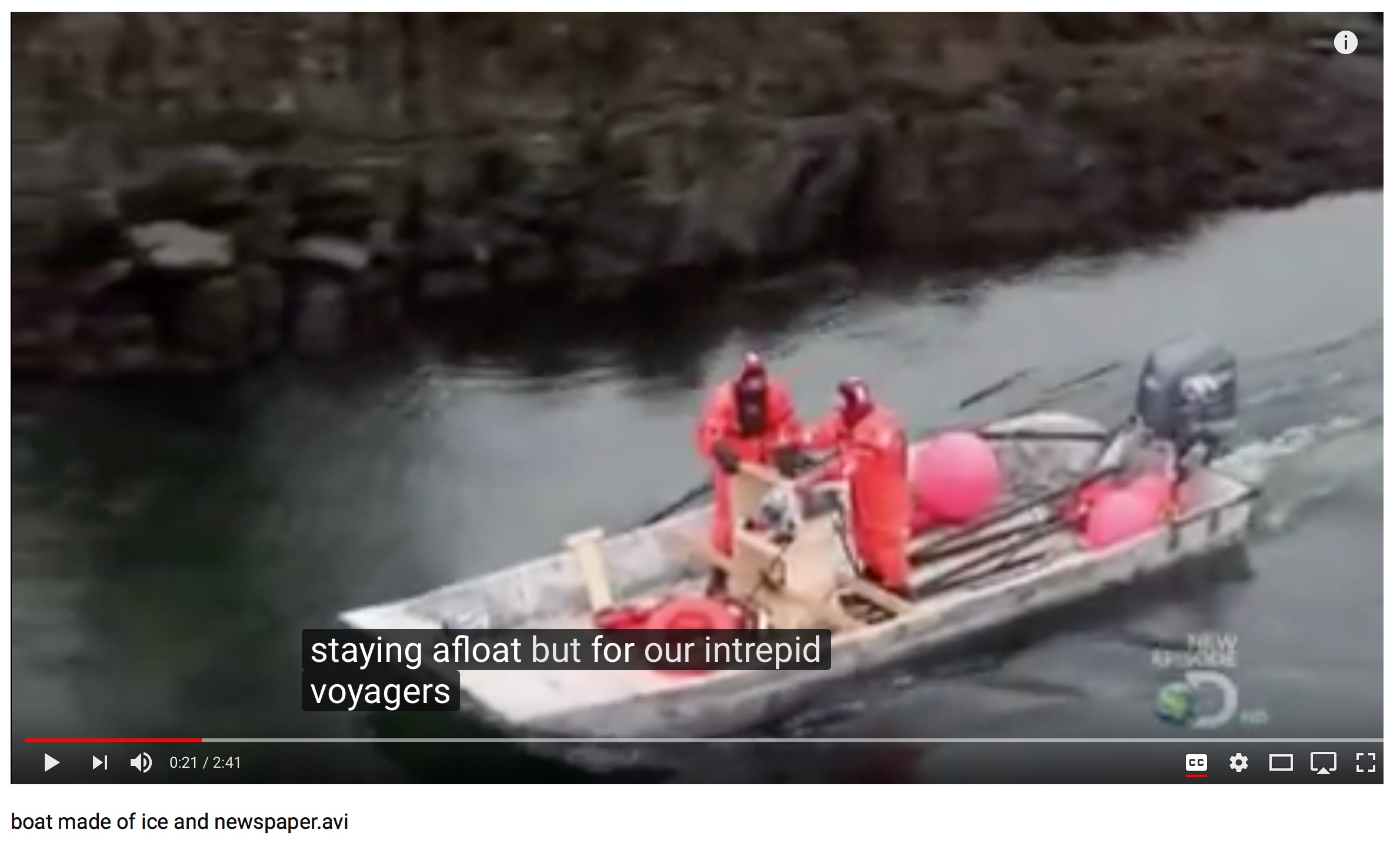 Pykrete is ice reinforced with wood chips. You could use other materials besides wood chips - here the Mythbusters built a boat out of ice and newspaper and it worked great. Your people could use ice and seaweed, or hair, or whatever else they had handy to act as a scaffold.

In WW2 the British made a serious attempt to build an aircraft carrier out of pykrete.

The project would have been abandoned if it had not been for the invention of pykrete, a mixture of water and woodpulp that when frozen was stronger than plain ice, was slower-melting and would not sink. Developed by his government group and named after Pyke, It has been suggested that Pyke was inspired by Inuit sleds reinforced with moss... Pykrete could be machined like wood and cast into shapes like metal, and when immersed in water formed an insulating shell of wet wood pulp on its surface that protected its interior from further melting.

You can make a boat out of anything which will hold a shape such that it displaces more than its weight of water. Reinforced ice works fine. I think the problem with Project Habbakuk is that an aircraft carrier has to be so large. A smaller boat would be doable.

Miller's Planet as shown in the movie had thousand-foot-tall waves every few minutes, atop a hard surface, with breathable air. Microbes in water could survive, happily photosynthesizing whenever they were near a surface.

I think that the surface would not be hard, due to constant erosion. Suppose a deep surface of grit, suffused with water, underneath a dirty sea. Earthlike rooted plants would be destroyed by every passing wave, unless they were adapted to the enormous pressure of the passing wave, and the quick changes in pressure. Suppose : a plant starts deep in the grit, reaching all the way down to the bedrock. It has a tough tube it sends up into the water. After a wave passes, from inside the tube, a leaf unfolds, sitting for a few minutes in sunlight. When the water is disturbed again by the next coming wave, it retracts into the tube and hides deep in the muck.

Consider that wood may be too brittle for most of this planet.

Consider that the poles have zero or small waves compared to the equator, as long as the axial tilt is zero and the planet orbits on the ecliptic. If so, there is a small area on each pole that is not destroyed by waves all of the time. If so, macro biology can set up there. You can have Everglades-style trees with permanently-wet roots. Let's suppose that the average temperature of the planet is High Goldilocks, so that the poles are temperate. If so, humans can arrive on the poles and start mounding up grit and plants. When you have dry land, you can fire clay. When you have clay, you can refine metal. Etc, Etc.

A polar community on a zero-tilt planet has no real night or day. But on a tidal wave planet, the host body fills up a significant portion of its sky.

Not the answer you're looking for? Browse other questions tagged civilization flora tides or ask your own question.

9
What would infrastructure look like on Interstellar's “Miller's Planet”?
7
Massive tides and resources