I've been trying to come to an answer for what conditions need to be in place to allow for the formation of a permanent or at least a long lasting weather pattern, in this case a large storm. I would like to establish that a certain area of a planet I am working on has a large storm that has been there since at least as long as the planet has been known.

For starters, it would likely have to form over a tropical area of the planet, allowing the waters heat and the air pressure to bring the proto hurricane to form and wind conditions just right to not collapse it. Once the pressure near the enter drops and storm starts spinning. Once it picks up in speed it begins to move, but how could that naturally be stopped? If it moved over land, what would need to happen to keep it alive.

In short scientifically for a large permanent storm to form and exist what conditions need to be in place and if impossible, what can be handwaved to allow it.

There is at least one quasi-permanent storm on Earth. Let me introduce you to...

Catatumbo lightning (Spanish: Relámpago del Catatumbo) is an atmospheric phenomenon in Venezuela. It occurs [...] over the mouth of the Catatumbo River where it empties into Lake Maracaibo.

It originates from a mass of storm clouds at a height of more than 1 km, and occurs during 140 to 160 nights a year, 10 hours per day and up to 280 times per hour. It occurs over and around Lake Maracaibo, typically over the bog area formed where the Catatumbo River flows into the lake. 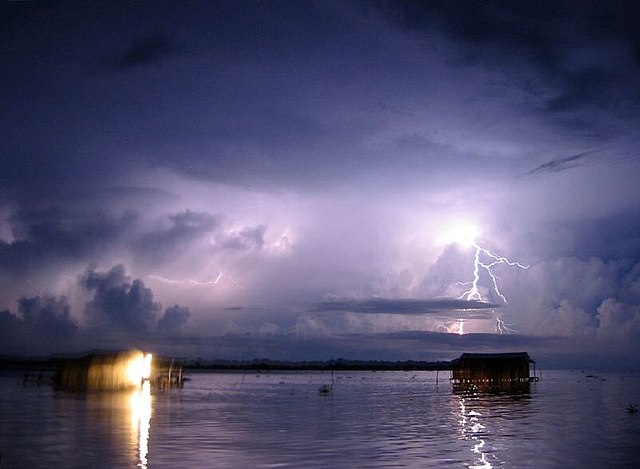 Italian geographer Agustin Codazzi described it: "like a continuous lightning, and its position such that, located almost on the meridian of the mouth of the lake, it directs the navigators as a lighthouse."

Catatumbo lightning usually develops between the coordinates 8°30′N 71°0′W and 9°45′N 73°0′W. The storms (and associated lightning) are likely the result of the winds blowing across the Maracaibo Lake and surrounding swampy plains. These air masses inevitably meet the high mountain ridges of the Andes, the Perijá Mountains (3,750 m), and Mérida's Cordillera, enclosing the plain from three sides. The heat and moisture collected across the plains create electrical charges and, as the air masses are destabilized by the mountain ridges, result in thunderstorm activity. The phenomenon is characterized by almost continuous lightning, mostly within the clouds, which is produced in a large vertical development of clouds.

All quotations are from the Wikipedia article, where more information about this phenomenon can be found.

The most straightforward way to do it is to make your planet synchronously rotating (i.e., tidally locked). Depending on the rotation rate, you can easily get either one or two permanent cyclones over, or just north and south of, the sub-solar point (i.e., the "hot pole"), as well as consistent trans-polar and equatorial winds which could be made to permanently dump rain over a conveniently-located mountain rain or similar.

Another option is to simply give the planet very little axial tilt, so it still has normal days and night but no seasonal variation. This would still give you fairly static, consistent ocean currents and wind patterns, which, when combined with appropriate geography to force air masses up and down (thus changing their temperature and water-bearing capacity), could result in essentially stationary storm systems.

If you don't need the storm to actually be stationary, then there is a third option: put all your major landmasses either far north or far south, leaving the tropical regions essentially clear, with a continuous band of ocean circling the planet, with only a relative small area of islands scattered throughout. Then, give the planet a fast spin. This will ensure that, once any particular hurricane forms, it will be able to continuously circle the planet without ever getting stuck over a large chunk of land that can cut off its power source, and that it will be confined to a relatively small range of latitudes (so it won't drift into colder waters and shut down, either).

Not the answer you're looking for? Browse other questions tagged science-based climate or ask your own question.

125
How can I ensure my Evil Tower is always stormy?

6
Could there be an upside down hurricane on a gaseous super-Earth
4
What would allow a livable planet to have an always-night area, an always-day area and a day&night cycling area?
20
How to create the eternal storm?
7
What would happen if a large area had permanent cloud cover?
8
Given an apparent solar brightness of <30% Sol from Earth, how differently would plants evolve?
3
Weather Impacted By Extreme Magical Effect (Heat)
3
Feasibility of a massive and nigh-permanent sandstorm?
3
What modifications are needed to have tree that can create hurricane/cyclone around it?