I have the following star system configuration: 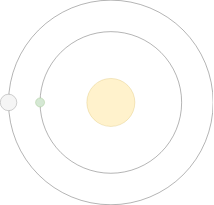 All bodies always stay on one line.

Star is similar to sun by parameters.

"Grey" planet is rocky planet, what is larger than "green" planet. I'm not sure about real size of this planet, maybe half of Jupiter mass.

I was trying to recreate this system in Universe Sandbox 2, but seems, that mass of the planet doesn't affect orbital period. So if I change period manually, simulation just decrease distance between planet and star (semimajor axis distance). But as I understand from orbital speed formula masses of both bodies are important.

So, can "Grey" planet have same orbital period (1 year) or not?

By the third Kepler's law

The square of the orbital period of a planet is directly proportional to the cube of the semi-major axis of its orbit.

Since this is not the case for your configuration, the answer is no, it is not possible.

Therefore it also follows that it's not possible that

All bodies always stay on one line

56
Is it possible to have a planetary system with planets having perfectly synchronized orbits?

13
Two planets in a stable horseshoe orbit?
23
Realistic sky of an Earth-like moon orbiting a gas giant (length of day and size of celestial bodies)
10
How would this tidally locked planet be affected by its moon and would the moon have a deaccelerated orbit?
7
Is this circumbinary planet set up in a stable manner?
56
Is it possible to have a planetary system with planets having perfectly synchronized orbits?
7
Calculating eclipse periods
7
160 Year Solar Orbital Period & 1.9 Year Moon Orbital Period - Is it possible?
11
How long would this eclipse last?
7
How to Calculate Apparent Magnitude/Brightness of Planets from Within the same Solar System
4
Could co-orbital planets also be double planets?