Holograms are a real thing. But what science-fiction TV shows and movies call holograms are something different entirely.

From a classical geometric optics standpoint, in order to create the illusion of an object there must be some sort of light-emitting or light-modulating surface along the line from your eye to the points on the simulated object. 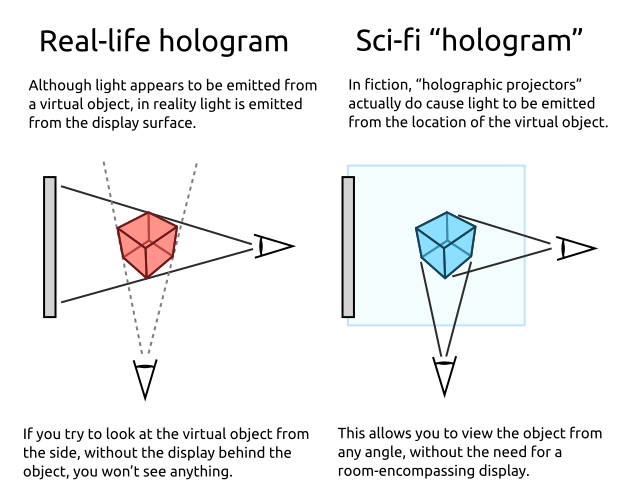 So, my question is: is there any physical process that I can use to justify sci-fi-style holgrams? In order to qualify, your "hologram" should meet the following requirements:

There are no requirements on:

That is, I don't need holograms as realistic as in Star Trek: 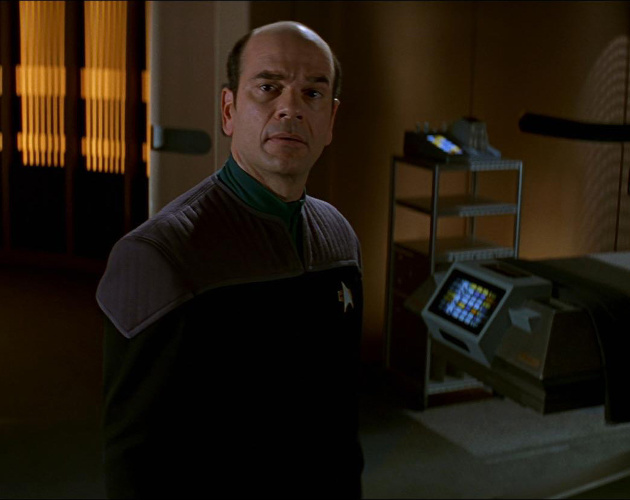 Something as basic as Star Wars's holograms would fit the bill: 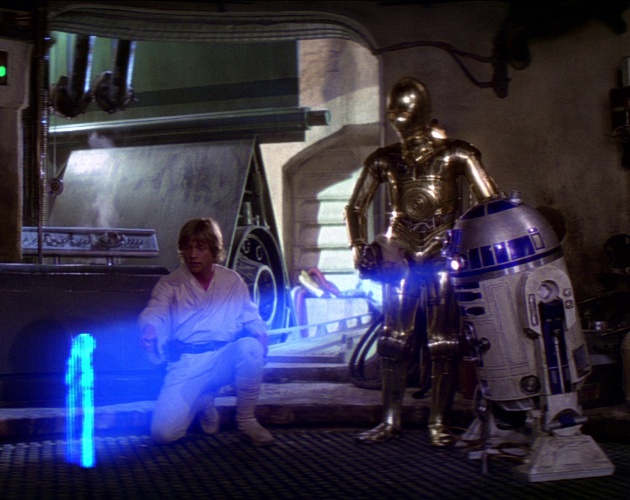 Do note the hard-science tag: I would like, if possible, to use real-world physics.

Just use "optical dust" and lasers.

An RGB laser system scans the volume to locate every dust particle in the volume. As a side effect a diffuse lighting and enough localized heat to keep the dust suspended is generated. Infrared lasers can be used if haze effect is not wanted and the dust particles are larger.

The difficult part here is getting the properties of the particles right as they presumably need to be safe to breathe and swallow. Should not cause adverse reactions on skin or eyes either. But unless your story is about the invention or manufacture of the system you can just assume somebody solved all those annoying issues and got all the proper licenses and permissions to scatter artificial dust into the air.

It is possible that they could exist as some kind of augmented reality that is either beamed directly onto the viewer's retina or inserted into the visual cortex by some other means such as ubiquitous nanotech augmentation. This makes a lot of sense if your setting is one where this could exist - given that it seems quite conceivable in the next few decades from there, that is not unreasonable.

If you are determined that they appear as objects in three dimensional space rather than being purely in the eye of the beholder then my guess would be that you did something very clever with a couple of different ray sources. These excite the air molecules at their point of intersection to emit light in a given wavelength or to reflect light in a given wavelength. Now I am not a physicist and I'm sure this is laced with problems, but it sounds plausible and unless you are using it as a cornerstone of your narrative, that is probably good enough.

You are intentionally restricting the definition of "hologram" to exclude some well known examples of things that might have satisfied your question, so I presume you intend to actually using the proper definition of a hologram. As such, it is a light-field recording of a scene. There is no way for an object to appear outside of the viewing angle due to physics: light travels in straight lines. There is no way for the hologram to produce a light ray that arrives at your eye at an incident angle outside the field of view of the hologram itself. Thus holograms cannot be free standing.

You might be able to play some clever games with a black hole between you and the hologram, bending spacetime, but I think that would fail your "must be safe" clause.

If you want a "free standing hologram," you will need to rely on one of the technologies you explicitly excluded from the question, such as the plasma display or augmented reality glasses.

Yes they do!
We are really close to having this using femtosecond lasers.

One cool thing about these projections is that you can actually feel them. Who knows, in a century it could turn into something like Voyagers doctor.

As 2012rcampion points out, this is early technology, and there are some shortcomings to overcome.

When you say there's "no requirements" on computational requirements or energy consumption, how far does that go?

It'd be inefficient to a silly degree, when you can just program your magnetically-guided mist to part out of the way of people passing through, but lets say the person calling the shots doesn't actually understand the tech, but is paranoid about poison gas, so you have non-technical reasons to do things the hard way. In that case, with enough computational resources (and this would take a lot of real-time computation), and enough emitters and sensors everywhere (hidden in every wall and other stationary surface in the room), theoretically, you could track every eyeball, camera, and other image-perceiving mechanism in the room, track every ambient surface as they move through the room, and scatter light off the latter and into the former. get enough of the right photons, with the right wavelengths, bouncing off the right surfaces, at the right angles of incidence, and hitting the right parts of the eyes and cameras, at the right angles, and they all add up to an image.

Frankly, though, any civilization technologically advanced enough to pull this off, let alone be practical with it, has probably long since outgrown any of the objectives such an image would be useful for conveying, unless it's specifically intended to be used to communicate to less advanced species in a way less threatening to them than having them all just suddenly know everything you want to convey to them. I'm not sure current technology would even be enough to allow us to calculate the amount of real-time computation pulling off such a stunt would require. It really is a silly large amount.

Not the answer you're looking for? Browse other questions tagged technology physics hard-science or ask your own question.

1
Can haptic holograms be used to make something akin to a holodeck?
1
Projecting on the night sky

3
Acceleration insulation: I can build the Moon cannon, now what?
9
What could hard light be?
6
What ways are there to keep a steady altitude with large fluctuations regarding load?
1
Can haptic holograms be used to make something akin to a holodeck?
5
Trying to Understand the Physics of How a Drillship Could Trap A Giant Underwater Alien Object Beneath Itself
5
What would be easy or difficult to do with the power to directly control light?
4
Good approximative function to extrapolate weight of scaled clothing
20
The mass of an economically feasible non-microscopic traversable wormhole
20
How would a physicist explain this starship engine?