Why would steroids not increase magical potential? [closed]

Mana is continuously produced by the body in order to keep a person alive and functional. It is also kinked to magical potential. Testosterone is an important signalling hormone in a mana production pathway. Physically large and athletic young men produce the most Testosterone. Mana builds up over time and can be boosted before harvesting after a testosterone spike (battle, ritual dancing, sex, etc).This would naturally make fit young males the most powerful warlocks in the setting.

Steroids are synthetic variations of the male hormone testosterone, and the human body can't tell the difference. Athletes and bodybuilders abuse these drugs to boost performance or improve their physical appearance. Since testosterone is being increased, it stands to reason that those who use it would increase their magical potential. However, it has no effect on ability and in some cases even decreases it. Why would this be the case?

The problem with steroids and the grey area "Pro-hormones" is the ways they make your body's natural hormone production respond. First, when a higher than natural level of testosterone is present in the body your body will begin converting some of it to estrogen in an attempt to balance out. Second is that your body will stop manufacturing its own testosterone so as to avoid adding to the problem. Now obviously the human endocrine system is a lot more complex than this, but these are two of the most glaringly obvious health effects of steroids.

It would stand to reason within this magical system that the process of manufacturing the hormones itself is what imbues the person with their magical potential, and not just the chemicals themselves. So, since the body of the person taking the steroids is not only making less (or no) testosterone of their own but their body is also working to try to neutralize the testosterone as well. It would stand to reason that this act of neutralization would be mirrored in their Mana production and that they would not only see no increase in magical potential, but an overall long term reduction in their ability to regenerate it as well.

Perhaps it could mirror real steroid abuse in that initially the person sees awesome gains in their performance but long term not only lose those gains, but degrade their overall peak performance as well. So for a short period (a few months to a year) the steroids could give a fairly impressive Mana boost, but then over time their abilities would begin declining until their overall peak potential was actually lower than what it was before they started.

Based on this it sounds like testosterone is a by product, together with mana, of something else.

Since assuming artificial anabolic steroids is known to reduce the activity related to the natural production (testicles of doped athletes are known to shrink to peanut size, just to quote one example), it's therefore logical that the assumption of synthetic hormones hamper mana production.

This is natural testosterone: 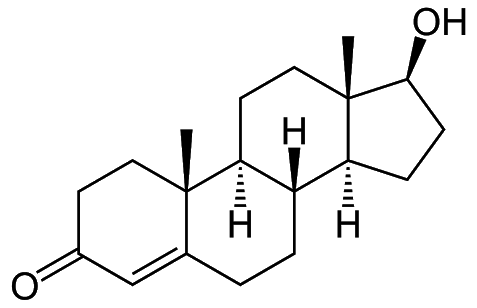 This is synthetical testosterone: 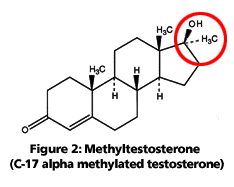 That little extra radical messes up the tiny little magical rituals your organelles do.

Even if it were not so... Natural testosterone is imbued with a little mana from your family jewels. Synthetic testosterone, being crafted away from any jewels that belong to your family, get none, so it is less potent. Magically speaking.

It would be terribly fitting if the reason was that testosterone wasn't something which boosted magical ability.

Of course, what led people down the wrong path was that we didn't see a peak in estrogen associated with mana. This is because the women knew the truth all along, but the men were too stuck on their sex hormones to see it.

Not the answer you're looking for? Browse other questions tagged biology magic or ask your own question.

51
Why leave magical runes exposed?
18
Why are monsters created by magical mutation still around after magic dissipates, but mutated humans are not?
2
Why is risky sport about absorbing magical creatures not banned?
8
If slaying virtual monsters can increase one's magical power, why would many veterans rather ditch the simulation?