The Great Carina Nebula in viewing range of a planet 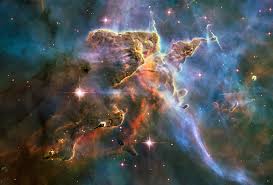 How close should a planet be to the Great Carina Nebula for it's inhabitants to look up and see this in the night sky? I'm aware much of the sharpness of the view would be lost due to the atmosphere, but let's say you were on this hypothetical planet (and I'm assuming you can see the falcon shape in the image) and if you put up your hand and it measured exactly the length of your index finger from falcon-head to falcon-tail?

How close is your planet to the nebula?

According to Wikipedia,the Great Carina Nebula is approximately 230 light years in radius. The formula for angular distance (how much of the night sky would be taken up) is : $ angle = atan( distance_{opposite} / distance_{adjacent} ) $. That gives you an answer in radians, which you must multiply by ($180 \over 3.141..$) to get the value in degrees.

For an example: if the planet was 270 light years away, the nebula would take up 45 degrees (or about a quarter of) the night sky.

The apparent magnitude of the Great Carina Nebula, again according to Wikipedia is +1 which is within the range where it would be visible to the human eye according to the same source. It would be roughly 40% of the brightness of Vega.

Not the answer you're looking for? Browse other questions tagged planets nebula distance or ask your own question.

11
What are the parameters of a planet having multiple moons?
6
Making a slow orbit around a large gas giant
10
Habitability of a world inside a dark nebula
4
How would I make a moon appear black in a night sky that has a nebula visible in it?
3
Nebula View from the surface of a planet
14
What would the night sky look like for a world on the upper plane of the galaxy, near its rim?
9
If the Earth was part of an ultimate solar system, what would the sky look like?
7
160 Year Solar Orbital Period & 1.9 Year Moon Orbital Period - Is it possible?
7
At What Point Does a World's Twin Planet Disappear, from the Viewer's Perspective?