In my world, 3-inch humans live on an Earth-like planet. My question, provided by a comment on a previous question, is: What would an anatomically correct 3-inch human look like?

How strong would he be? Would he have different physical abilities? Would heat, cold affect him differently? Would he have to eat a lower or higher percentage of his body weight to thrive? And so on.

If these humans have evolved on this planet, would evolution have acted differently on them? For example, I have already made an assumption that they would reproduce at a higher rate given that the world would be a much more dangerous place for them.

Earlier, I asked how to calculate the weight of a 3-inch on an Earth-like planet. Thanks to members with math skills, I got a quick answer. Thanks guys! Answer: about a fifth of an ounce.

In the course of answering my question, it was suggested that a 3-inch man might possibly by 24 times as strong:

Golding also suggested that evolution would likely give such a man much more slender bones, as it has kangaroo mice.

void_ptr asks "whether the 'perfectly scaled' human would have any issues with thermal regulation, nutrients storage and such."

Here is a link to that question; How much would a 3" human male weigh?

Basically, the overall size and dimensions of a three to four inch tall human (i.e., recognisably humanoid in shape, rather than three inches tall and four feet wide), would look and be shaped something like this: 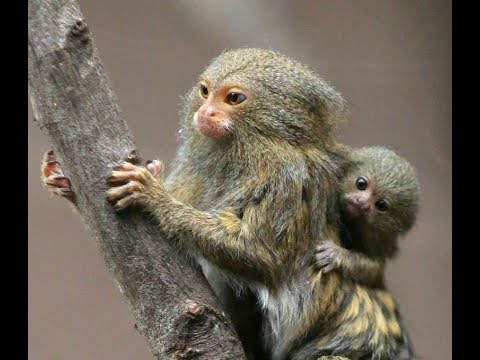 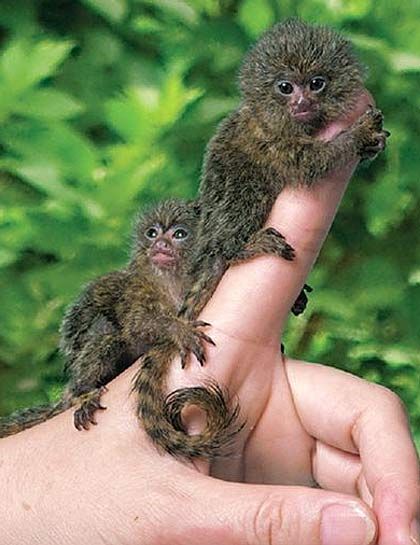 The Pygmy Marmoset is one of the smallest primate species. Also, this monkey looks a little more human-like than the the other contenders (a lemur and a tarsier).

They live in small troupes of six to eight adults with the children in a sort of communal care society, indicating that Tiny Humanz might evolve a similar structure. They can live up to about 20 years and are highly adaptable, curious creatures. They're about 4 to 6 inches tall, so just a bit bigger than your Fairy sized people.

There Really isn't any way to fit enough brain matter into a body that small and end up with a creature that possesses the same psychological makeup that we have. They might be a bit more intelligent than mice or rats (rats are actually quite clever, just not sentient). They would probably not have complex language or be capable of abstract thought. They would really just be really clever rats with a high level of dexterity.

Would Need A Warm (but not Hot) Climate

Assuming these creatures are really just 1 to 1 miniaturized replicas of humans and carry no extra adaptations like thick fur or the ability to hibernate they would not do very well in cold weather. Humans only do well in cold weather because they have things like abstract thought that enables them to do things like start a fire or make themselves warm clothing. Your humans have approximately the brain capacity of a large rat, so they probably aren't going to be doing anything impressive like discovering fire or planning months ahead of time for events that haven't happened yet.

Thermo-regulation Would Be difficult Anyways

Humans are able to keep cool because we have so much surface area secreting sweat. Smaller surface area, smaller ability to keep cool. Additionally we keep warm (when naked and away from a heat source) because our body sacrifices blood flow to our extremities in an attempt to keep as much heat in our core. Again, smaller mass means less insulation and heat radiates away faster as well. They would get cold easier, they would overheat easier.

An inordinate amount of their metabolic process would go toward cooling off and warming up. Rodents have developed several strategies to avoid this problem like hyper-fast metabolisms, fur, hibernation, near constant activity, or long periods of torpidity. This means that with none of these adaptations (again, assuming a 1 to 1 mini replica) they would need to be eating a lot of high calorie foods and have excellent access to drinking water.

Having a metabolism that is primarily occupied with just not overheating or freezing to death means a lot of stress on the heart and circulatory system. While an exact number for the lifespan is really impossible to pinpoint, they would probably have lifespans that are much shorter than a normal human being. Probably between 3 to 10 years max based on animals of a similar size and metabolism.

More simply, look at a hamster and a locust. They are examples of warm and cold body of that size.

Not the answer you're looking for? Browse other questions tagged science-based evolution humans survival humanoid or ask your own question.

1
How do exoskeleton suits connect at joints; when movement is powered?
6
A very strong person
3
How heavy would a Naga be?
8
Would carbon fiber be a good choice to strengthen human bones, and how would that work?
8
Aliens selectively breed humans to be bigger. How big could they get and still look human?
25
What advantages could I give to “Halflings” to make them viable
8
Would it be possible to rearrange a dragon's flight muscle to somewhat circumvent the square-cube law?
2
Reasonably tougher humans against falls, concussions etc
4
How can the human body be optimized, yet still be mostly human?
5
Would A Neanderthal Skeleton Be Better Suited To Handle Gigantism?