Anyone know of a good software for making a galaxy map?

Pretty straightforward one here, I’m just looking for something to design a galactic map with. I would like to not only name and mark planet/systems but also draw out borders between empires and administrative units within those empires.
worldbuilding-resources software-recommendations
Share
Improve this question
edited Apr 12, 2020 at 22:19

Keep in mind that what your asking isn't straightforward at all. A true galaxy map must map hundreds of billions of stars and quadrillions (if not more) planets, asteroids, nebula, etc., etc. The Milkyway@Home project is a ginormous effort just to map our own galaxy. Even a map generator that dealt with only 1/100,000th of the data would be mind-bogglingly huge. So what you're really asking for is software that supports building a comic-book version of a galaxy.

If that's what you're looking for, you can find a few here.

Edit: You can also find options on our list of worldbuilding resources.

You can carve up a galactic disk into colonial empires like Africa, if that is the metaphor you are trying to make. It has been done again and again. 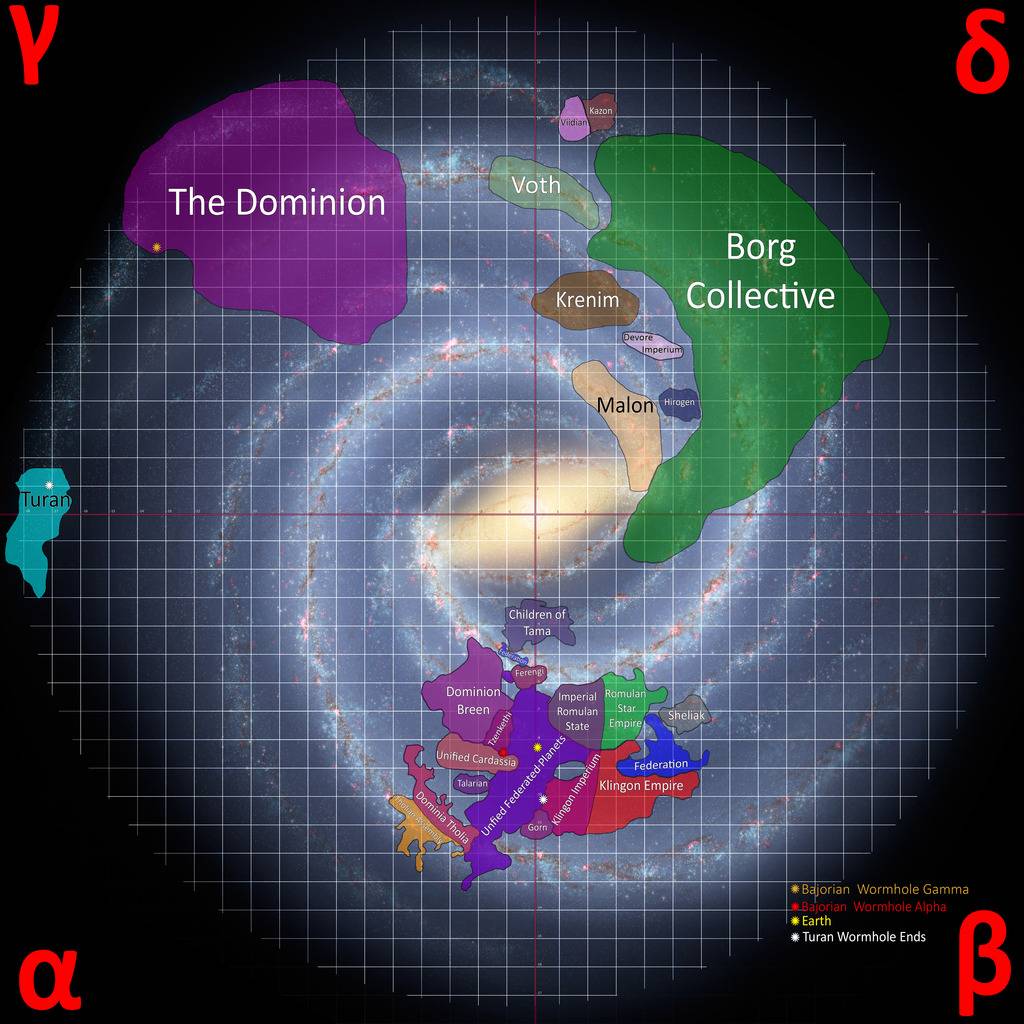 But carving a photograph into political boundaries doesn't tell us much about anything, except the relative sizes of the "empires" which we can infer to imply power and resources (although our own maps suggest this is a bad indicator of either), and which "nations" share common borders (which in a 3D world is almost nonsensical).

But the narrative message is clear: the galaxy is divided into political realms and their areas of dominance. That might be all you really need to say. In the above example, distance and geography are meaningless since the cannon of Star Trek routinely involves long wars with enemies from impossible distances, and conveniently mutable travel times between empires. It's little wonder they avoided showing maps like this, even when they would be relevant to the plot (Voyager's journey home, DS9's space world war).

I recommend instead using mind mapping software to create your star map.

"Empires" become hub nodes with multiple satellites. Trade routes can be marked by linking the nodes and connecting the branches. Factions can be colors, power centers can be shown by node or font size. Individual stars can be tagged in multiple ways: resources, political affiliation, religion, species, etc.

The data can be re-arranged in a single click to show a particular star's neighbors and associations. Also the data can be fill-in as needed, becoming granular only with worlds that are actually relevant. As an author or as a reader, a map that shows all the narrative connections is probably more important than one that just shows a point in space.

There's no need to draw borders because "nations" will probably exist as bubbles around planet strongholds, and alliances may have more to do with ideology or resources than nextdoor neighbors. Since there's a lot of emptiness in space, "filler" systems don't need to be placed at a geo-representative pin location. If they need to be represented at all, they can be in broad abstraction – a single node for the (uninhabitable) center of the galaxy (as a location), or a single node for "badlands" or "unaffiliated territories" explain a narrative function without bringing up more questions (like: "Why can't they just fly around it?").

The animated gifs are from a freemium mind map web service called Coggle.

A suggestion I gave to a friend once:

Open MS Paint or something similar, create a black background, and use the white spraypaint tool to make patches of stars. If you want more stars/bright spots in an area, just spray more over there.

Once he had a layout, I suggested he use a more robust image editor like Paint.net to draw out boundaries, add names to places, and such.

Low-tech, but it should be easy.

As others have stated: galaxies are vast on a staggering scale. Also, they are in 3D, so 2D maps are useless unless you want a Star Trek type universe where you can have ridiculous scenarios like border blockades (I mean really?) If that's what you want, then try the 2D options that others have suggested.

If you're interested in the real deal, have a look at Astrosynthesis, which can create galaxies and allow you to edit them as well as generate systems, planets etc.

With AstroSynthesis, you can can (sic) map out large portions of space - plotting stars, interstellar routes, and subsectors. And best of all, you do it completely in 3D space! Zoom in and out on your sector, pan and rotate around stars, follow routes, and watch fantastic animation effects - all in 3D.

Under features, it lists the ability to define sub-sectors. I haven't tried this myself, so I'm unsure if it meets your "draw out borders" requirement.

Define sub-regions in your sector map to easily identify regions.

I also recommend that you have a look at Space Engine. The editing controls are limited, but it is great fun to explore, and you may find it useful.

I'm working on my own book series taking place in a galaxy that is not our own. Since I don't have the budget to buy any of those programs, what I did was sketch it out on paper and then use my printer to scan it into the computer and save it as a file. I highly recommend this for your situation, since you don't have to learn how to use whatever application and can just draw it out however you like. If your map is going to be complicated, you can use colored pencil and color code everything. Look at a real map for inspiration if you get stuck. You can see the result here

Not the answer you're looking for? Browse other questions tagged worldbuilding-resources software-recommendations .