Raining animals is a rare meteorological phenomenon in which flightless animals fall from the sky. Such occurrences have been reported in many countries throughout history. One hypothesis is that tornadic waterspouts sometimes pick up creatures such as fish or frogs, and carry them for up to several miles. 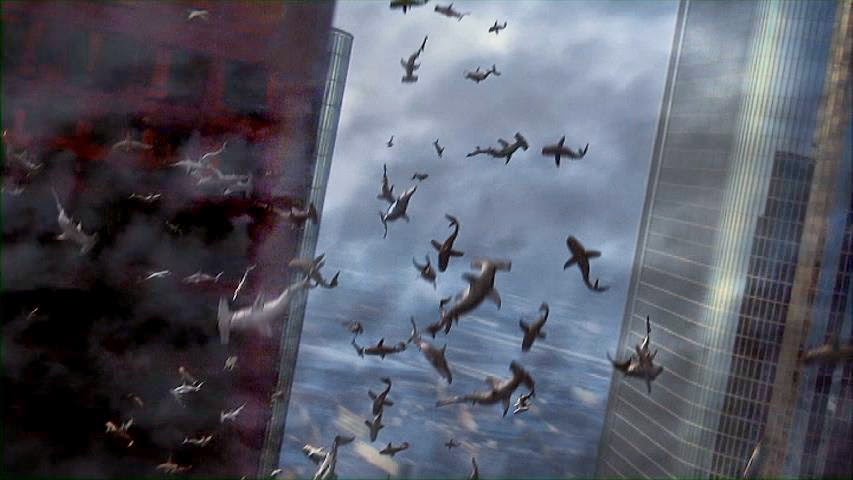 Imagine a world where raining animals are a regular occurrence - say, most days on the tropical rainy season. Could a marine apex predator adapt to such a meteorological feature in order to take advantage of it, in terms of mid-air feeding? If so, what adaptations would it need, and what would it look like?

I don't expect that a shark which evolved for this would necessarily still look exactly like a real world shark, so a sharky final appearance is not a requirement for answers. Other marine predators such as orcas, barracudas and mantas are also valid candidates for this niche, and don't need to look exactly like the ones from our world's after the necessary evolutionary adaptations.

Being directly threatening to humans is also not required (I think the tornadoes are already enough of a menace).

Edit: I see people assuming that animals will always fall on land after the tornado goes. Just remember that tornadoes may flood coastal areas, giving marine life some chance to fall into water. Asides that, please assume that the tornadoes may also happen over water, far from land sometimes.

Falling, yes, but falling with style

When falling, if you want to catch prey, You need two things, mainly:

Some animals can decide where they will head to when falling. Flying squirrels, humans with wingsuits, or... Snakes.
Astonishingly, some snakes can glide through air. Namely the Chrysopelea. Snakes are also good at being underwater, so it could be totally possible to have a mix between a gliding snake and a marine one.

Snakes are good at catching things. Well, at catching ONE thing at a time. But we want our falling predator to be able to seize all the preys in his reach.
What looks like a snake if the snake had multiple arms ?
An OCTOPUS 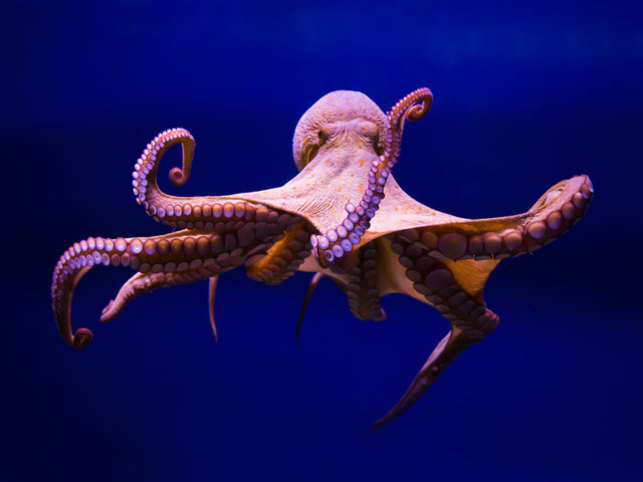 Moreover, octopuses are crazy good at controlling their bodies. With a little training and once it conquer its fear of heights, it could glide through the sky, following falling, frightened, desperate fishes, whom the last vision would be a terrifying cephalopod twirling toward them.

The biggest problem for a sharknado isn't the flying or being sucked into the air or feeding. It's the impact. So your creature either needs to be small enough to land safely, or it needs some way to slow down its terminal velocity. I'm going to assume we want a sharknado and not a minnownado, so let's think big.

Flying fish anatomy won't scale for a large animal. At shark size, the only practical solution is parachute-based. 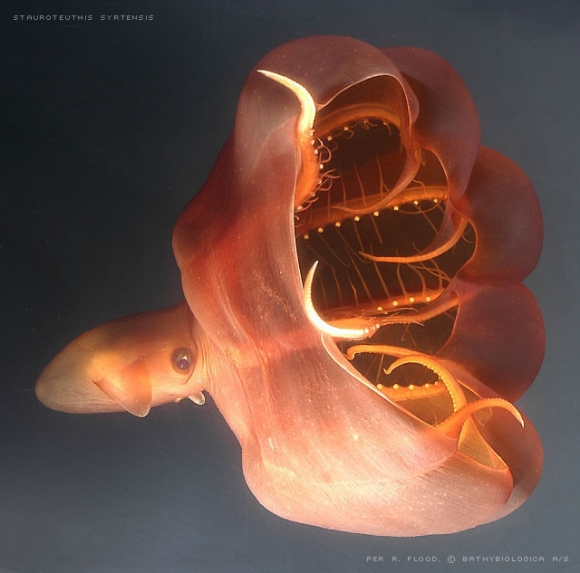 Coincidentally, we already have a sea creature which is the right kind of shape, and that's the vampire squid. Like a flying fox, it has skin filling the gaps between its arms. Those arms (eight of them, like an octopus) have barbed teeth along them. Vampire squid only grow to about 30cm, but if we have an evolutionary niche then there's no reason they couldn't grow to the same size as an octopus. The giant Pacific octopus is reported to have up to 9m arms, with a mass of around 130kg. Let's just say that one of those parachuting into you is not going to improve your day.

Could this land itself as a parachute though? 130kg is the weight of two adults, so let's use a tandem chute for comparison. Apparently a tandem chute will be from 350 square feet, which is 31.5 square metres. 9m arms and pi gives you up to 254 square metres, which makes this trivial - it doesn't even have to be a particularly efficient wing, or have skin going further than 3m down its arms.

Landing on land instead of water? Not a problem. Stranded octopi have no problems squirming their way back to the water.

So, I give you something scarier than a sharknado - a parachuting squid-octopus bigger than your house, with barbed teeth running down each arm.

For bonus points... Do these tornados or waterspouts take place near sea cliffs? A paraglider can easily soar the updrafts of cliffs. So an even scarier thought is squadrons of these things, deliberately getting themselves caught in waterspouts near sea cliffs, so they can soar the cliffs and wait for prey to come past underneath. It'd be like a snowy owl swooping down on a tasty little mouse - except humans would be the mice.

The only remotely plausible answer to this question would be flying fish. 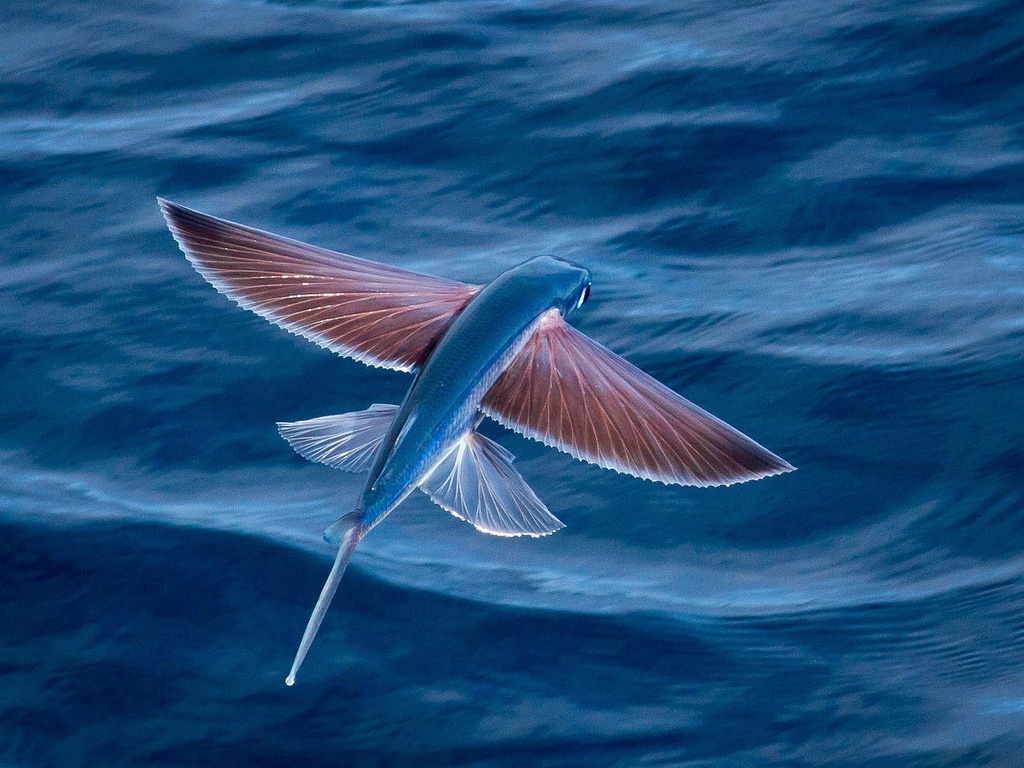 Flying fish in the air

Flying fish are already adapted to a limited flight regime, so being caught up in a waterspout and released in the air isn't going to change much of their lifestyle. The biggest danger is being crushed by the insane water pressures and "g" forces being developed inside the waterspout, but we will handwave that away.

Once clear of the waterspout, a flying fish will likely deploy its wings and begin to glide. Since it is being released at a much higher altitude than normal, it will be able to glide a considerable distance, much farther than usual (normal flying fish have terrible L:D ratios compared to gliders). From there, it might be a fairly easy adaptation to quickly glide through the dissipating waterspout and grab edible particles, plants or other fish that are being released into the air at the same time.

This really just takes normal fish behaviour and encourages evolutionary adaptations for better flight, vision and reflexes (all which would also be advantageous in the aquatic environment as well).

I don't see a pathway to evolving man eating flying fish, however.....

If the sharknado has to feed on things suspended in an air stream, it means it has to be able to collect as much as possible in the shortest time as possible. 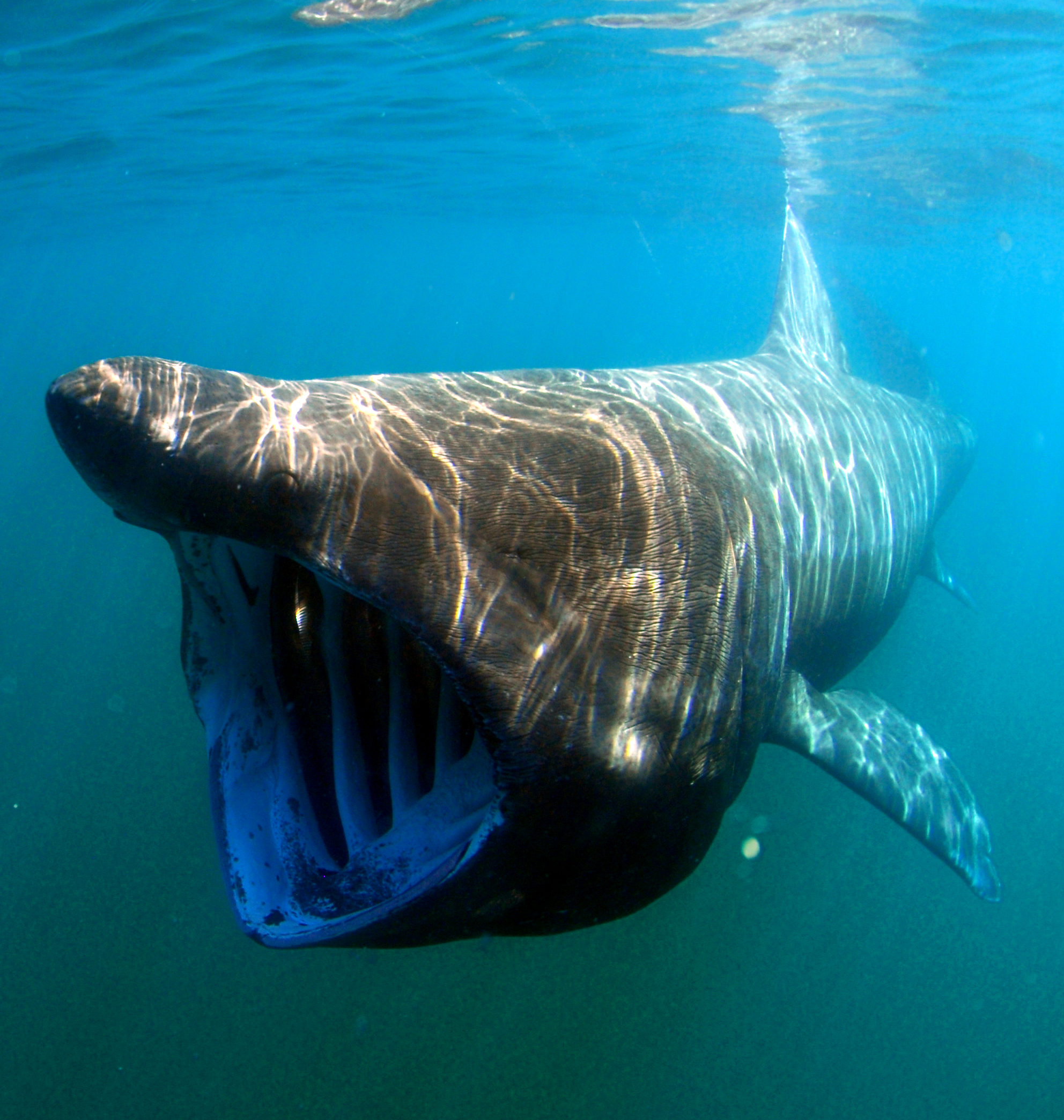 or the megamouth shark 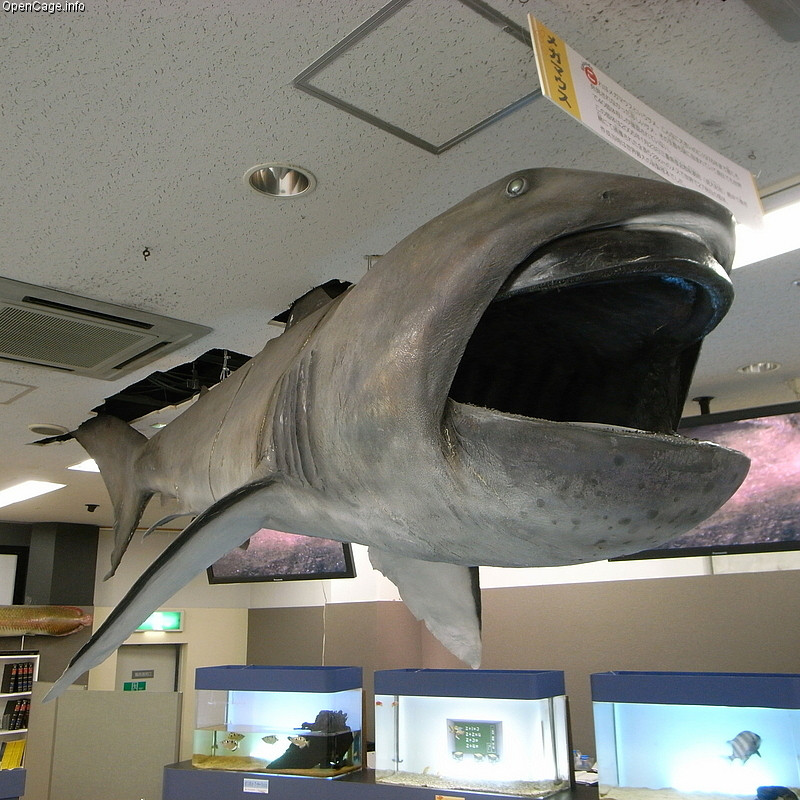 I assume the mouth would need a more pronounced net structure when fully opened, so that the drag would not blow the sharknado away while attempting to feed, something like a butterfly net.

OT: thanks for the attempt of putting some legitimization to the entire sharknado thing. 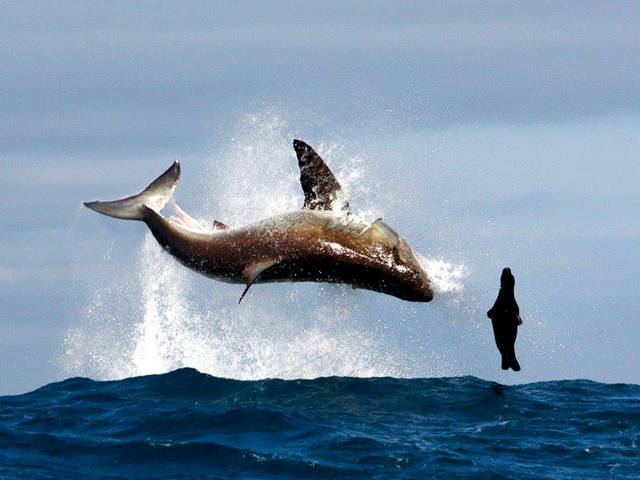 When a waterspout delivers a flying buffet, the apex predator sharks wait at the bottom for the good stuff to come to them. By jumping out of the water, they prey on animals in the air that have no opportunity to flee. Water based propulsion systems don't work in the air, so the food is going to go where gravity directs it, which is hopefully into a shark's mouth.

If you are going to lurk under water, and then jump up to catch a helpless falling meal, you need to

a. See into the air

b. Have good distance vision

Fish eyes are generally more convex than land animal eyes, because of the differing focusing properties of water. A jumping shark needs eyes more similar to that of a land animal so it can focus on a falling target tens of meters above the water's surface, while still submerged.

Distance vision is a function of binocular vision. A jumping shark will want its eyes closer together in its head.

7
Would storms on an ocean world harm the marine life?