Why would smaller be better for anteaters?

In the world of this question, ants and especially termites are the dominant herbivores by mass. There are no large grazing mammals competing with the bugs for the siliceous grasses and thorny trees of the savanna.

The dominant (by mass) food chain on the savanna's of our Earth is grass->antelope->lion. I would like a longer food chain with more steps, similar to that in the ocean (phytoplankton -> zooplankton -> small fish -> larger fish -> shark).

In order to make this happen, I need small lizards, birds, and/or mammals to be the primary (again, by mass) predators of the ants and termites. But on our Earth, ant eaters are big: anteaters, aardvark and sun/sloth bears are the dominant insectivores of the savanna regions. Larger animals have some distinct advantages; namely, while 10,000 ants can kill a shrew, they can't do much to a bear.

What evolutionary pressures would favor small (1 kg or less) insectivores over large ones in an ecosystem dominated by ants and termites?

Make the predators numerous and dangerous.

If a creature is protected against most predators (e.g. by a hard shell or by sheer size), the creature can invest much time to grow slowly, have a longer gestation time and have a comfortable life.

If there is an abundance of hungry predators who can circumvent the creature's defences, there's an evolutionary pressure to produce as much offspring as possible in the shortest possible time. This, in turn, favors small body sizes and fast body growth.

The best examples can be seen in the ocean. Whales have almost no natural enemies, so they can grow slowly and have a long gestation time. Blue whales become sexually mature at age 4 - 5 and have a gestation period of almost one entire year. Most smaller fishes, however, risk being eaten every day, so they need to grow as fast as possible and produce plentifull offspring at 1 year of age.

When the ecosystem is dominated by a crawling food source that can easily swarm you, the safest way to get your meal is to stay off the ground. The smaller you are, the easier that is.

Flitting around the great termite mounds that dot the savanna are insectivores that specialize in hovering above danger and striking prey when the time is right: the dreaded hummingbird.

Though the common view of a hummingbird is a tiny thing drinking sugary water from a bird feeder, hummingbirds are descendants of the insectivorous swifts, and as such they get most of their nutrition from catching insects mid-flight. In a world with plentiful crawling critters, I'm sure their diet could easily shift from mosquitoes and spiders to a diet closer to that of woodpeckers.

The one flaw of hummingbirds is their incredibly high metabolism, which is supported by high-energy nectar from flowers and the ability to enter a light hibernation when food is scarce. I'm not sure what the state of flowers are in your world, but even when grass blades are sharp and everything is covered in thorns it's hard to protect a flower from every angle a hummingbird might try. 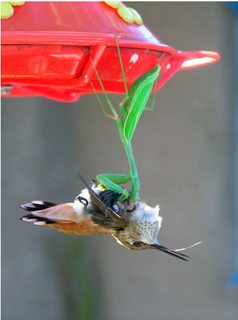 What you're probably looking for is the Elephant shrew, basically he's a miniature version of the anteater.

Elephant shrews mainly eat insects, spiders, centipedes, millipedes, and earthworms. An elephant shrew uses its nose to find prey and uses its tongue to flick small food into its mouth, much like an anteater.

Being smaller, they have different predators. Mostly aerial rather than ground based as they're fast and evasive, keeping clear escape routes in the grass.

What we need to consider is why anteaters are so big

By choosing termites to be the primary food you've put yourself into a blue whale situation. The blue whale lives on krill, the largest creature in the world primarily feeding on one of the smallest. Termites only come in very large numbers which are dangerous to small creatures. The live in heavily fortified structures that are well defended. To break into their fortresses you need to be large and heavily armed and then able to consume them in large numbers to make up for the energy cost of the forced entrance.

To make smaller anteaters more effective you need to break down these fortresses. Ant and termites to live in smaller groups, maybe only dozens or hundreds. Appropriate numbers for a smaller hunter but not enough to feed a larger one. For termites you also need to take away their distinctive mounds, those things set like concrete, the smaller anthills are your limit here, a shrew needs to be able to dig through it.

From what I know atmosphere won't save us as arthropods are inefficient with oxygen. If you make them smaller you could end up with smaller animals feeding off of them, but I am not sure if that'd be your goal, especially with sun bears.

A Mass extinction if recent enough could have wiped out larger fauna, an easy solution but possibly not what your going for. If they're the largest herbivores don't expect many creatures to not eat insects. In diagrams they usually show snakes and birds being at the top of the food chain over mice and other small creatures. The tertiary predator will be as large as it needs to kill off the other predators. If bears can exist there's a possibility of larger herbivores or other species of carnivora so I would figure out where they came from or how large you will be expecting them to be. Warmth might benefit a smaller animal as well, so a warmer planet might be more suited to what you desire. Sorry if this isn't a great answer, this is a question I am interested in though!

Not the answer you're looking for? Browse other questions tagged earth-like fauna ecology .

11
What would cause termites to be the dominant herbivores on a savanna?

10
How long would it take for an array of introduced alien fauna to form functional ecosystems on a near-future "Dead Earth"?
29
Wasp hives in a walking corpse. Why would wasps do this?
11
What would cause termites to be the dominant herbivores on a savanna?
10
Why do Ichisongas hate elephants and hippos?
8
Which modern organisms would survive a new K-Pg level impact?
2
If Earth had a smaller second moon, what would the sky look like?
6
What is the minimum viable ecological pyramid a terrafoming project would introduce to world with no life to make it suitable for humans?
3
What type of biological changes would need for animals to move earth-like on a terraformed mars?
2
Why would a small climbing herbivore have tusks?