After many, many attempts on worldbuilding, I decided to go back to an old project of mine.

I need to design a planet that, at the same time, is habitable but hostile to human life.

I would like it to have as its principal ecological feature a very, very dense fog that covers a large part of the surface of the planet, regardless of the season of the year. What would be the requirements to make such fog possible? What would be the climatic and ecological effects of a fog like that on a ecosystem similar to Earth's?

At the same time, it should be a darker planet, somehow. Thematically, I would like to explore the possibilities and consequences of darkness as a distinctive ecological feature on societies.

Maybe, although my planet shouldn't be tidally locked, it could have a twilight / dawn more extensive in time than Earth's. Could it be possible? How?

Is it possible that an Earth-like planet may have a night longer than the day? Could it be habitable for human-like species?

This is not dark fog. This is volcanic ash. 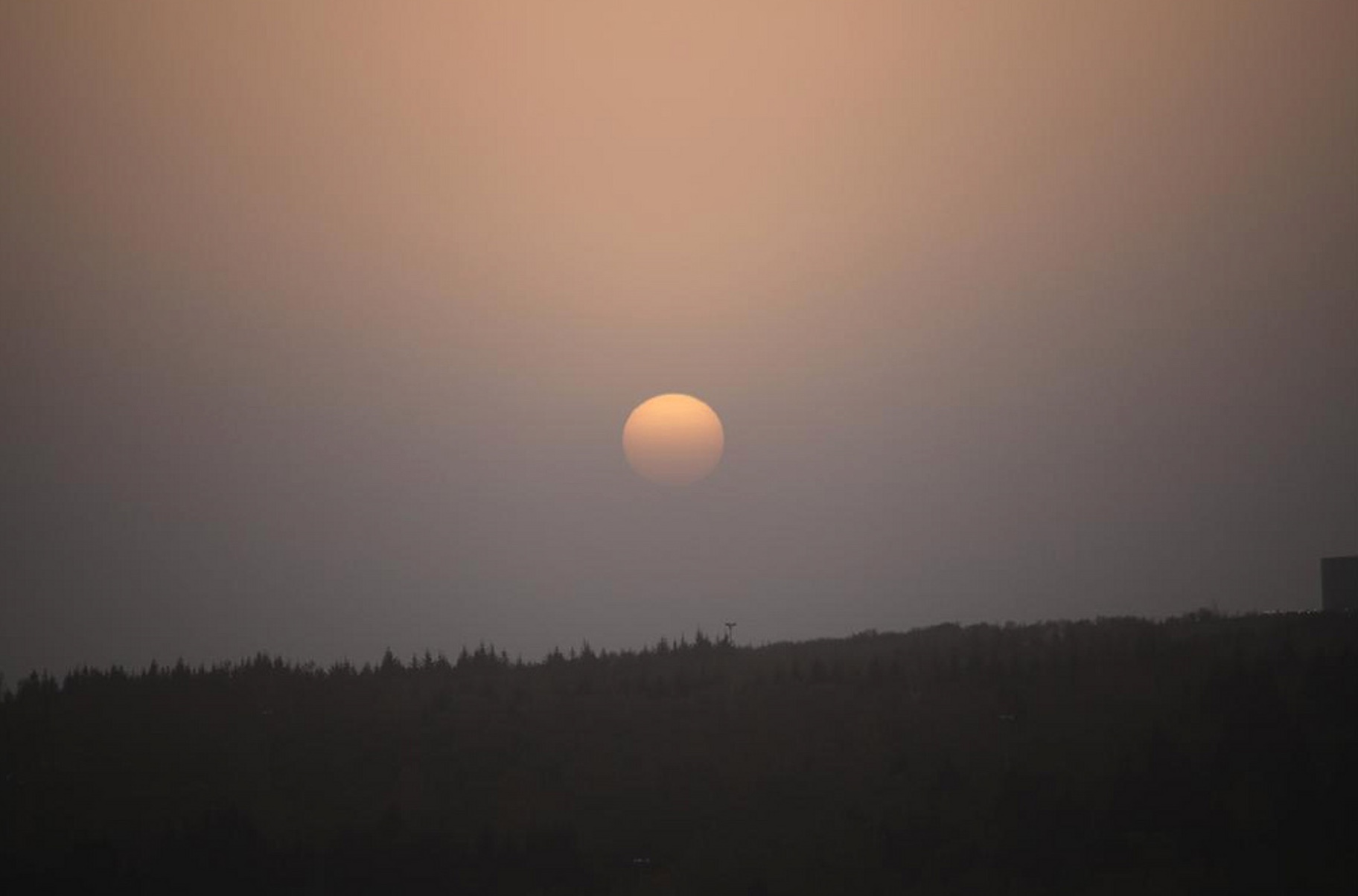 Sun through a cloud of volcanic ash The ash from Eyjafjallajökull and Grimsvötn is still lurking around, and when the wind is right this is what happens here in Reykjavik. Photo shot at 10:30 pm (22:30) GMT

In your world, there are volcanos that spew ash on a regular basis. The eruptions darken the sun. Then when there is wind, the ash is again stirred up.

As @Wilk has already mentioned, your best bet would indeed be vulcanic ash. Give your planet some very active volcanoes, and the fog/ ash clouds could be perpetual.
The ecological consequence hangs on one question: For how long is that ash cloud already there? If it is around for already a few hundret or thousand years, the ecology will have adapted. Only up for a few decades... The ecology will not like that. Same goes for the climate.
If you want to additionaly darken your planet, place it around a star with a luminosity lesser than that of our sun. This may result in a colder planet, that is still habitable and very dark all around.

If this situation is the norm for this planet, animals and plants (if there are plants!) will have adapted, e.g. better hearing or olfactory senses, or photosynthesis with the prevalent wavelength of light (IR, maybe? You can handwave that).

In regard to a humanoid civilisation... There may be one, it is your story! Their society may avoid light, or deem it divine. As long as they can get enough food to survive, a breathable athmosphere and shelter, this planet is habitable (albeit a bit frosty).

When all else fails in world building, Life is often the solution.

Why not start with a planet which is primarily swampland and fill those marshes with a plant which produces fog. Perhaps this is a world where vines did not evolve to transport life fluids within the plants, so to grow out across dry spots, the surrounding plants in the wet lands spew thin water fountains into the air. The winds then carry the water in all directions including the nearby dry lands, allowing seeds to germinate and survive in the moistened soil. As a side effect of all of these water fountains, a larger than average quantity of ground water enters the atmosphere, producing a continual fog.

Out on the oceans, a variant on these water fountain plants could take the form of great dark leaved plants which float just under the water's surface, absorbing sunlight for food but also producing enough heat to increase the atmospheric moisture above them as well.

Add these mist makers to a planet which is already predisposed to fog for the same geological and atmospheric reasons as the foggy parts of Earth, and you could have a very macabre twilight world to play with.

4
Designing a mega-fog
1
Flora and fauna from a darker, foggy planet

3
If We Push Super-Saturn to the Distance of Neptune
6
Making a slow orbit around a large gas giant
6
Please help me calculate acceptable planet sizes & eclipse shadows cast by my binary planet system
1
Is this model possible? Fast axial precession + tidal locking
1
Reality Check: Is This Habitable Long Term for Humans
9
Feasibility and consequences: the cosmic dance of twins habitable moons
14
What kind of Gas Giant has a "safe zone" between the radiation from a star and the radiation from a gas giant planet?
4
Looking for a review of my tidally locked red dwarf planet system specs!
3
Habitability of my world