How would merfolk society dispose of their dead? And would disposing of the bodies in the ocean have any negative effect on marine life?

I have a tribal merfolk society, living on and near a volcanic island, that is also inhabited by humans.

The problem that I can't seem to figure out is: how would they dispose of their dead?

Wouldn't sinking the bodies in waters around the island have negative effects on local marine life?

The humans dispose of their dead by burning them in the volcano. So I didn't want the merfolk to do the same. 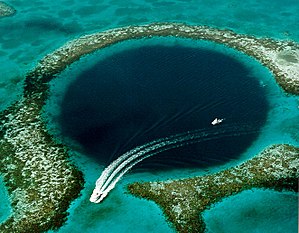 In the waters near your island, there is a place where no merfolk dares swim. It is an underwater sinkhole. Legend says that at the bottom dwells the god of death. Any merfolk who attempts to swim down to the bottom finds that, less than halfway down, their gills can no longer bring them enough air to breathe: they either drown, or frantically swim upwards to the light, feeling blessed to have escaped the death god's clutches. (Blue Holes are anoxic zones, rich with bacteria, but deadly to other marine life). It is into this pit that the dead are cast, weighted with beautiful jewelry of coral and stone, to pass into the afterlife.

Sky Burial (or rather the undersea equivalent)

Certain cultures in south Asia have a practice which is termed sky burial. Basically, the dead bodies are taken to a remote location (normally high on mountains) and left for scavengers.

In contrast to Western culture where scavengers are viewed as evil and unclean, in cultures with sky burial the particular scavengers which act on the corpses (typically particular vulture species) are seen as being endowed with a certain sacredness.

For your merfolk culture, you could have something similar. There's a large number of species in the ocean which specialize as decomposers, cleaners and scavengers. The merfolk could have certain regions in a reef (perhaps caves, or groves of coral) where such scavengers live. These could either be naturally occurring, or the scavengers could be collected from across the ocean and placed there. The dead body would then be lovingly placed in that area, after which the scavengers which live there would remove (eat) the body in relatively short amounts of times.

Wouldn't sinking the bodies in waters around the island have negative effects on local marine life?

Quite the contrary. While dead organisms release potentially toxic amounts of nitrites and phosphates in a closed ecosystem such as an aquarium, larger marine ecosystems actually depend on this circle of life-- like trees do for our air, algae feeds off of these poisonous byproducts to keep the water from becoming toxic. (If too much stuff dies, you end up with things like algae blooms, but nature always balances itself out. Your aquarium, not so much.)

When marine life dies, it initially sinks to the sea floor. Shrimp and other bottom-feeding detritivores come along and pick it apart. As decomposition happens, the carcass accumulates pockets of gas inside itself, causing bloating and buoyancy and the apocryphal "going belly up."

So you have a pretty cool pretense for something Rapture-like here. Bodies could get left on an altar in an open-air crypt or lowered into a giant mantis shrimp's lair. Once the body has fulfilled some nourishment role and been mostly consumed, it will naturally ascend to the surface/heavens, get carried off by currents as it disintegrates, and humans may find the occasional stray scale or something washing up on shore.

Why dispose of them? Life under the sea is difficult. Acquiring enough nutrients to survive is always done at great difficulty. It's not like they can plant their food like humans do. They must constantly hunt fish, scavenge or gather whatever they can, and, occasionally, trade with the humans nearby.

Therefore, when one of them tragically dies, they don't get rid of the body. It's not only a great waste, it can also attract predators. So, instead, they honor their dear departed by fully consuming the body, in a ritualistic meal in which they celebrate the life of the deceased, and all the sacrifices he made for the community.

The humans may be squeamish about it, but what do they know? Why, they throw their honored dead into the fire, the barbarians! 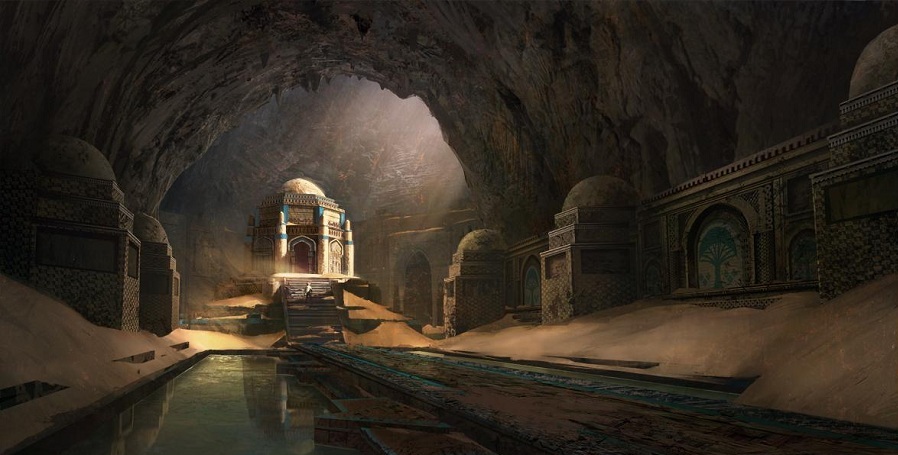 On the island is an ancient building which the merfolk now use as a crypt. It was not built by the humans who live there now, nor was it built by the merfolk; its builders are long gone and it is not known what manner of beings they were, why they built or what it was originally for. It may have originally been completely underwater, and was uplifted with the volcano.

The humans fear it and stay away. That suits the merfolk, and the fact that it is accessable by sea suits them as well.

It is much larger than the merfolk need; even though hundred of merfolk remains now line the walls there are still large unused areas and even unexplored areas - the structure extends above and below ground, and also below sea level in many places.

Surface dwellers (i.e. Humans) long believed in Underworlds of a sort. Inside the bowels of the Earth were a mysterious place, one potentially inhabited by gods or monsters. The dead were often associated with the Underworld, an associate that lead to widespread burial customs.

For merfolk, the obvious 'other world' is the surface. Honored dead can be taken out of the life giving ocean, and placed in the surface world, with which the afterlife is traditionally associated. After all, what merperson knows about the goings on in the mountains and forests of the surface land?

Bodies are prepared ritually taken onto the shore, and placed in restful positions. Sure, we humans may know that the fate of those bodies is to be devoured by scavengers, but it isn't like we go digging up our own dead to see what happened to them (at least, not very often) and even the ancients knew that a buried body was eventually worm food.

Merfolk never go onto dry land, except for these burial ceremonies, so they just don't think very much about what happens to the bodies once they are deposited.

If you really want a parallel, your dead merfolk could be more rapidly decomposed by 'burying' them in deep geothermal vents. As your island is volcanic, it isn't much of a stretch to imagine a fault line/trench with geothermal activity somewhere in the general vicinity. This will at least deal with having corpses of your family floating around the general area and could give some plot lines since the humans and merfolk both observe similar reverences for their dead, in the same volcano/fault.

It partly depends on the religious beliefs. Tibetans often used sky burial as a way of disposing of bodies, their religion telling them that the dead body is a useless discarded husk, and wanting to allow the elements of the body to be reused.

A similar ritual for the merfolk would be to take the dead body to a special area, saying prayers for the soul (depending on religion), and commending the body to go back to nature. The place would doubtless have plenty of fish to eat the bodies.

Symbiotic relationship with the humans

When a Merperson dies, they are wrapped in seaweed and left on a special rock platform on the shoreline near the human habitation. The humans quickly come and remove the body, which is never seen again although sounds of feasting and rejoicing coming from the direction of the human village soon after. It is the humans way of honouring the Merfolk's dead.

(Of course, what the humans are really doing is eating this convenient source of free food!)

The corpse is dragged by familiars to a specific place (graveyard) where small animals or fishes quickly eat the flesh, but preserving the skeleton, that is placed with the others.

Burial at sea is an actual thing in the real world. It has been practiced by humans for millenia. Most of the major religions, whose foundations date back from centuries to millenia, have their methods and rites for it. For example, from the wiki above:

The Anglican Communion has detailed procedures for burial at sea. The ship has to be stopped, and the body has to be sewn in canvas, suitably weighted. Anglican (and other) chaplains of the Royal Navy bury cremated remains of ex-Naval personnel at sea. Scattering of cremated remains is discouraged, not least for practical reason.

In the Book of Common Prayer (1928) of the Protestant Episcopal Church in the United States (ECUSA), a member of the Anglican Communion provides a specific prayer of committal for burials at sea.

Countries have their own codes for it as well. Also from the wiki above:

A funeral director is not required for the burial of cremated remains at sea. However, full body burials require specific preparation to ensure the body or coffin sinks quickly, and in many states a licensed funeral director is required. The Environmental Protection Agency regulations for full body burials at sea in the United States require that the site of interment be 3 nautical miles (5.6 km; 3.5 mi) from land and at a depth of at least 600 feet (180 m). California prohibits whole body burial within its state-asserted three-mile limit...

Your merfolk could take a page from humans and do something similar.

The seas have their own scavenging animals, so any corpse will be devoured and the nutrients will go back to the ecosystem. As long as they dispose of the bodies far enough from the island, and maybe tied to - or sacked along - some stones to weight down the corpse, the dead should not end up washing ashore.

Edit: for anyone who thinks a burial at sea could not be effective: it would be the underwater equivalent of a zoroastrian funeral.

The bodies of the dead are covered in hardened clay casts, or something sufficiently sturdy to give them structure.

These casts would be brought to the edge of the coral reef, where they would be placed like a memorial. Friends, family, or community could come and pay their respects to them in a ritual where they give the body back to the sea, similar to a sky burial mentioned in other answers. The cast would be adorned with coral polyps, giving the coral a head start on forming.

Depending on the social structure in your story, perhaps the royal family has some responsibility to maintaining the reef, and as such are able to adorn their dead with more polyps, to mark their contribution to society, and their eagerness to give back to the coral, by providing more head starts.

In this sense, The Reef becomes their ancestors.

Fed to the Sharks

Some people have a thing called "Sky burial" where the body is placed on a high platform, where it is eaten by carrion birds.

Using the swim bladders of large fish, they create balloons which they fill with hydrogen from underwater volcanic vents. They attach the body of their loved one to this balloon using lengths of woven kelp, then they release him into the sky to be eaten by birds.

Not the answer you're looking for? Browse other questions tagged death merfolk or ask your own question.

9
How would merfolk store and preserve their food?
61
What would a medieval war against an aquatic race look like?