Is complex life on a season-less, moonless planet, with two separate and distinct ecosystems possible?

Is it possible for complex life to exist on a planet with no tilt and no moons, and be so close to its sun that the equator would be far too hot to cross on foot and still survive, and its poles far too cold to explore, and yet it would have two distinct habitable zones, or strips, if you will, (one on each hemisphere), between the equator and the poles? If this planet could hold liquid water in deep canyons and and support an oxygen-rich atmosphere, might it be possible that its northernmost habitable strip and its southernmost habitable strip could have evolved two completely different complex ecosystems, both of which evolved complex life, such as humans that never encountered one another, until say, the invention of the airplane and subsequent crossing of the equatorial region to the opposite hemisphere?

To achieve a world such as this, the sun must have an extremely low luminosity, such as an old red dwarf star, possibly even a neutron star, and the world must be in an extremely close orbit around it.

The very low luminosity would mean that a matter of a few thousand kilometres would be sufficient to cause a significant difference in temperature, allowing the situation required with a very hot equator and very cold poles.

The fact that this world orbits such a star (that must once have been much larger) at such a close range would indicate that it would have to be a captured object.

Not quite what you're looking for in terms of the setup, but the end result is similar - Jinx, an egg-shaped planet.

The idea is that the shape of Jinx was fixed when it was in a close orbit to its primary, leading to tidal forces strong enough to produce this shape. Over time, tidal effects have caused Jinx to recede from its primary, while at the same time the planet has cooled and become more rigid, retaining its distorted shape.

The key in your case is that due to its odd shape, the equator ends up with extremely high atmospheric pressures. This gives Jinx two "bands" of habitable latitudes, with the equator being uncrossable without higher technology. Here's a crude illustration: 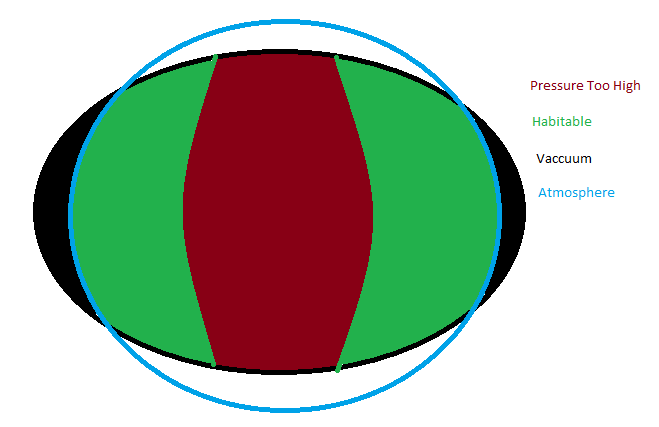 If you don't want it to be around a gas giant, you could say that it was distorted by a star and then retreated, or that it formed as part of a gas giant system and then was lost, ending up in orbit around the star instead.

I'm not sure you can have cold poles while not having winter and being close enough to the sun to produce the extremely hot equator you are looking for, but isolated habitable regions is certainly possible.

Life would probably not have evolved completely independently in the two zones. Seeds and small insects can quite easily be picked up by a storm and blown great distances before landing. Birds might be able to spread this way too, but anything larger will have had to develop independently.

If the habitable zones have similar ecological niches available, you can reasonably expect something to evolve to fill them in each location, a more extreme version of what happens with remote islands on Earth.

Humans are more problematic. Intelligent life may evolve in both places, but it is very unlikely to happen at the same time, especially if you are including civilization. That requires ending up within a few thousand years on a scale of billions - a one in a million chance.

To run into intelligent animals which could be taught civilization, the target widens to a million years or so but its still a thousand to one.

This is interesting. I would say that the less environmental fluctuation there is, the less evolution happens (or happens very, very slowly). Most likely you would get organisms which are hyper-adapted to their specific environment/climate and which could not survive on different one.

Not the answer you're looking for? Browse other questions tagged earth-like moons habitability or ask your own question.

12
Choosing axial tilt for human habitable planet for largest temperature variations
8
What would weather/geographical conditions be like on a tidally locked moon?
2
What rough climate and/or biome classifications would I assign to a planet with 31.1 degrees axial tilt?
5
How to get rid of the rainforest for a desert moon with only habitable poles?
8
Are Geologically Dead Planets Habitable?
3
What (if anything) can cause a substantial and stable shift of the magnetic poles of a habitable planet away from its geographical ones?
7
Can a rogue planet have a habitable surface due to geothermal heat?
2
Is This Realistic Physical Geography for my World?