What would tides look like on a planet with two similarly sized and oppositely places moons?

I’m making a mostly ice planet with two moons. For the purposes of this question, let’s assume that they are both proportional size and distance to the size and distance to our moon. Both are tidally locked to the planet and the planet is in turn tidally locked to each moon, meaning that the whole system orbits the star locked in the same positions. As the title asks, what would the tides look like here?

Tides amplitude would be smaller than earth's

Let me start by a definition. Tidal amplitude describes how big the difference between high and low tide is on a given day.

Tides are due mostly to two things: the moon and the sun.

Let's start with the moon: 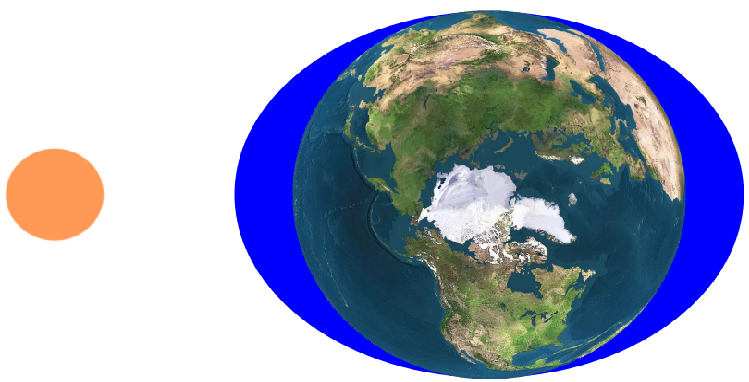 When the moon is at one point, gravitation laws makes that everything is slightly pulled towards it. As the water is a fluid, it moves a bit towards it, this is straightforward to understand. On the opposite side of the earth, the water also rises, this is not so trivial to understand and is well explained in this question. Basically, as the moon is very far away from the water on the other side of the earth, it's attracting it less, so the water rises.

In my picture, the high tide would be roughly in the middle of the Pacific and in the western coast of Africa.

Now let's rotate the moon (or, rather, the earth) 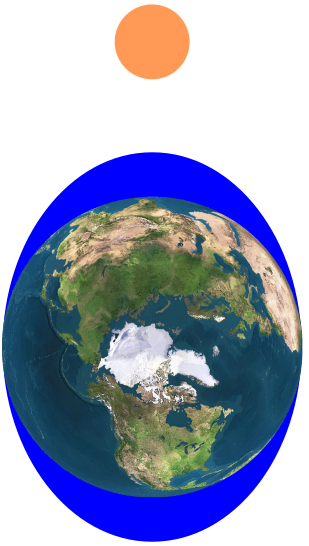 Well, this is easy to follow, the high water follows the moon. If you stay at one point close to water, you will see it rise and recess (twice a day) as the upper water us followed by lower water, and then by higher water again, and so on.

Now, in the illustration, high tide would be roughly in India and in Mexico.

In this sunless system, the amplitude would always be the same between high and low tide. 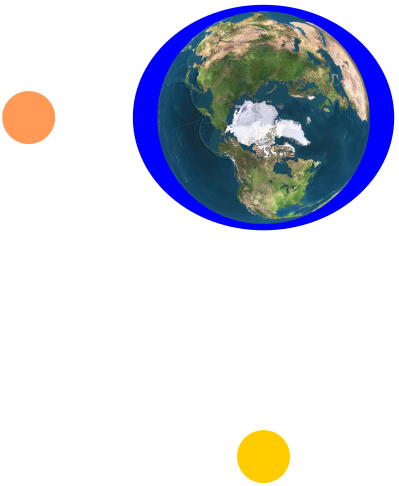 The sun is much bigger, but further away than the moon. The equation for the gravity is this:

With m1 and m2 the mass of each planet/star/moon and d the distance between their gravity centre. If you do the math, you will find that the the sun force is bigger on earth than the moon's.

But, because it's further away, the difference of it's effect between the side of the earth facing it and the other side is much smaller. Detailed explanation here. If you do the math (which are getting complicated), you will now find that the sun is having 46% of the influence of the moon on tides. About half of it.

So, in my picture above, you can see that the sun has an effect, but not as important as the moon's. This picture represents when the tides have the lowest amplitude, because forces of both celestial bodies are trying to neutralize each other.

Sun and moon opposite

If you put the sun and the moon on the same axis (either opposite as in the image, or on the same side of the earth), their forces adds up and the tide has the biggest amplitude.

You have two moons, opposite to each other:

The water is pulled twice as much as on earth towards space below the moons.

I understand that your planet is not tidally locked to its star. So:

The sun will create a tide, just like on earth. Assuming the same star size and distance as on earth, the amplitude would be much smaller (roughly about a quarter of what's on earth). This is because the sun is the only object inducing a tide, and it's influence is reduced in comparison to earth, because the sum of the moons' masses is heavier.

There are some other factors influencing the tides, as noted in comments to your questions, such as

But, this is not really relevant for the question, as you are only asking us about the moons, and give no info about these points. My answer assume that their are similar to what's on earth.

Also, all of the above is a very simplified version of reality. Tides also behave according to, for instance, Laplace dynamic theory.

If your planet is an icy one, there are two possibilities. Either it is iced to the bottom (not much water left). Then probably no visible tide at all. (Pro-tip: choose this option and just forget about all the above, not tide, that's it, easy).

Or it is just a cap of ice above water, in which case it will rise and fall with the water, or break into icebergs. And all of the above applies.

116
How would having multiple moons affect tides?

4
What would wind currents and water cycle look like on a tidally locked planet?
1
Planet half the size of earth with two moons. Livable? Climate Range?
2
What kind of climate would a planet with a 49-day orbit have?
3
How does having 3 moons change a planet?
2
Is it possible to make a stable planetary system like this, and what would the orbits have to be?
7
Is there a plausible way to have a Gas Giant with two or more earth to mars sized moons orbiting it in the Habitable zone?
3
What would the geography a planet with extreme tides look like?
2
Tides on a tidally locked planet