How to make a rocket-boosted sledgehammer that won't break the users' arm?

Even though GURPS, so far, is my best shot at coming up with sci-fi melee weapons, this one's tricky.

The rocket-boosted sledgehammer differs from the standard tool by having a thruster on the back that activates when swung at the target, pumping in extra kinetic energy. 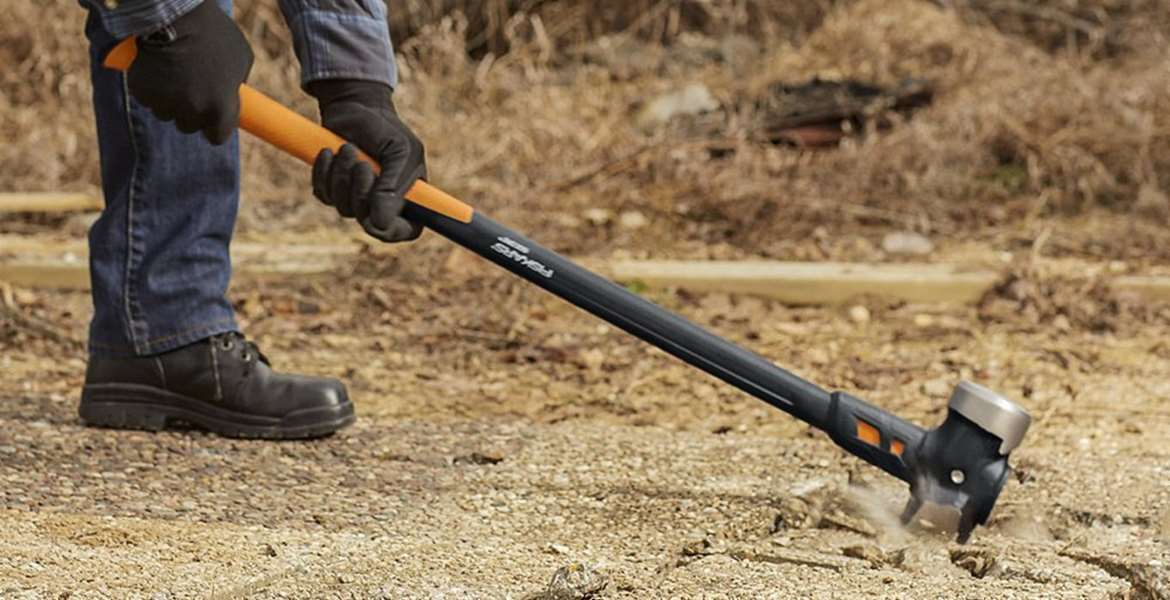 So, yes, I can already hear you typing that this guarantees overswinging and a few dislocated joints with an elevated chance to miss.

Other than that, yes, it is as practical as a screen door on a submarine. That's probably the reason Thor only uses it to split boulders (assume a sphere 90 cm in diameter, the material is limestone) and Loki in two to intimidate her enemies into surrendering. It's super effective.

I only need you to solve the overswinging/u missed lel and the arm-breaker issue.

Answers will be rated according to:

Since the question specifically asks how you don't dislocate your shoulder or break your arm, the real issue is when the rocket impulse is activated.

The simplist possible solution would be to have a very high thrust solid fuel rocket, with the igniter primed by a fuse on the strike face of the hammer. You swing as normal, but when you impact the target, a sudden blast of rocket thrust provides a continuing impulse when the hammer would normally be decelerating. A slightly more advanced version would have a stand off sensor to allow the moment of ignition to take place a fraction of a second before impact.

If you need multiple swings, then the interior of the hammer's head would have a stack of fuel charges like poker chips, with separate ignition and presumably some sort of sacrificial layer to separate the charges and prevent "cook offs" or other accidents. The real issue with this system is that the mass of the hammer would decrease with each swing, so the amount of energy being delivered would change substantially between the first and last swings.

If you have a rocket to provide kinetic energy, why you need a handle to use a arm?

L.Dutch hit the nail on the head (with a rocket boosted sledgehammer?). If most of your force comes from a rocket, not the lever-action of the swing, why bother with the handle at all?

The power of a sledgehammer swing comes from the torque of having a heavy object at the end of a long handle. The person holding the sledgehammer is providing the point for the hammer to rotate around, and some input force, but a lot of it is gravity.

If most of the force is now coming from a rocket, why bother with all that? Simplify things by making, essentially, a cannon. Fire the sledgehammer head off the handle. It's easier to aim, and easier to brace for the recoil.

Alternatively, have the rocket charge go off when the handle is nearly horizontal in the swing already. The rocket will fire straight up and force the head straight down into the target. No rotational yanking motion to fight. This limits the amount of force the rocket can provide, but it makes it more practical and easier to aim.

Or flip it around and put the "rocket" on the face of the sledgehammer. Make it a shaped charge which focuses the explosion into a jet that cleaves through the object.

Of course all of this only works once before having to be reloaded.

You need another rocket.

Attach another rocket at the base of the handle to counteract the force of the first and make the impact faster.

You might also want to extend the handle itself so that the hand holding it is in the middle so the rockets both move with the same leverage. Otherwise the second rocket will have to create more thrust to make up for the lack of leverage. 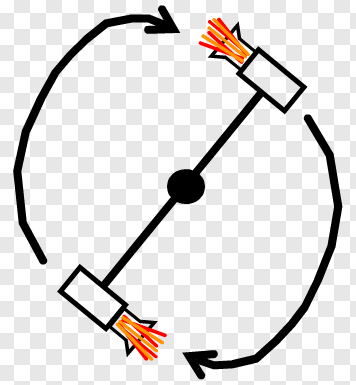 After all, what can't be made better by adding another rocket?

I opt the a one-pulse-per-blow method. The user swings the hammer and pushes a button on the handle. The rocket fills an ignition chamber with fuel/air mix and ignites it with a spark. It gives a short but strong pulse of thrust. You must press the button each time you want to hit,. This is a safety measure. The handle is a hollow tube which can fill with fuel.

Make your forces balance out

We need some physics here (and better graphics skills than I possess, unfortunately). Your basic force diagram for an item pivoting around a fixed point is like this: 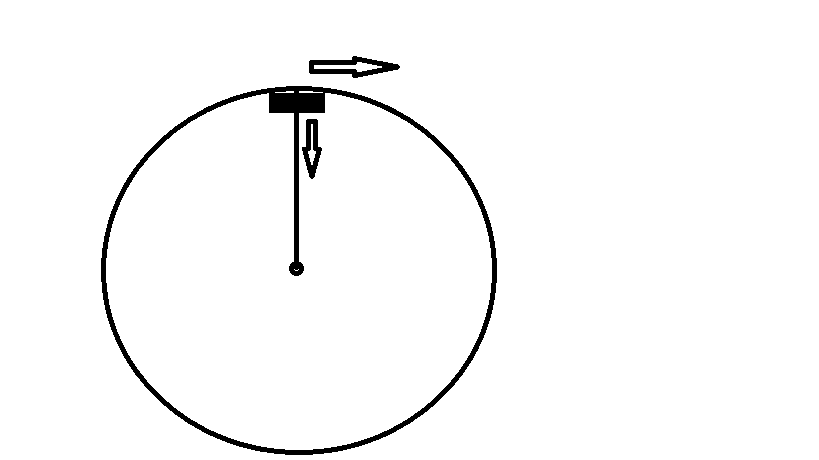 The head of the hammer has an inwards force from its arm/handle around its pivot point, and momentum in its direction of swing. Provided the inwards force is sufficient to match its momentum, it rotates and strikes its target. 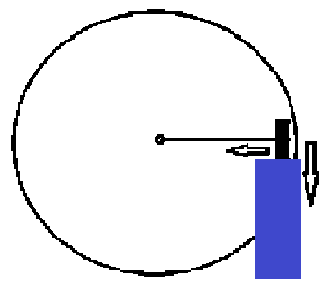 If the inwards force is insufficient because there is a rocket adding more force, the head flies off the handle at a tangent. The requested weapon is a hammer, not a catapult launched gyrojet, so no need to explore this further. 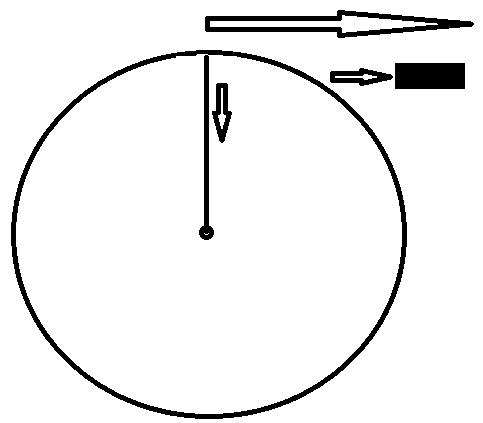 So the trick here is to make the inwards force sufficient. You could add another rocket at the head of the hammer producing an inwards force - but the net effect is a force vector between the two rockets. So why not just point your main rocket an angle to provide that vector, so it is both accelerating the hammer and providing the necessary inwards force to stop it flying away. 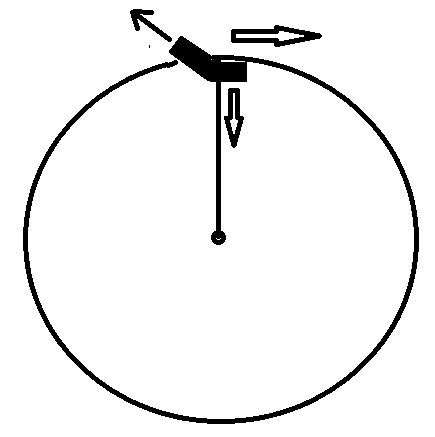 Now you have a hammer that can have a long, accelerating swing that should not go flying out of your hands or dislocating your shoulders. (The exact angle of the rocket relative to the striking head is left as an exercise for the engineering team. The acceleration and maximum controllable resulting speed are a matter for your medical staff.)

However, this will be a nightmare to control. If you twist the head at all during the swing, it will suddenly veer off to one side. Therefore, I strongly recommend that you use some kind of eye-tracking hardware that lets the hammer identify the spot you are trying to hit and add the ability for the hammer to self-correct during the swing to hit that spot. (Vectored thrust on the rocket or smaller steering rockets are options, gyroscopes are probably not a good idea on a rapidly rotating weapon). If this makes the weapon too complicated then make sure you practice to always have a perfect swing.

Assuming this all goes perfectly, you have just hit your target with the head of a hammer travelling really, really quickly. Now you get to feel that jarring impact through your hands and arms in one very brief and incredibly painful instant - unless your engineers are looking after you. The simplest way to join the head and handle of a hammer is to put the handle through a hole in the middle of the head. This also allows you to keep exerting force on the target through the strike. However, neither of these considerations apply here - the concept of "simple" went out the window a long time ago (relatively speaking) and the rocket will keep exerting force on the target. All you need to do is survive the jarring impact with minimal pain and injury. What you want is for the handle to end in a sleeve that fits around the head, with shock absorbers between the end of the head and the sleeve. While the period of deceleration will be very brief as the sleeve moves 5-10 cm forward, it will be much better than the jarring impact you will experience otherwise.

Final thoughts - do not try this at home. Pick the home of someone you do not like. Then let them try it while you watch from a great distance.

You could have a [insert explosive gas here] pack hanging around the users waist or back with a tube that leads into the hammer’s head. Along the shaft of the hammer, there could be a switch which ignites the gas. Finally, the back half of the sledge hammer’s head is where the fireworks happen. It would be a vented chamber where the ignition takes place and sends the hammer hurling forward.

When using the thing in combat, or even for mining, the user would swing like normal and initiate the explosion after clearing the middle of a swing’s arc. The explosion would then propel the head forward as the user’s relative position would subtly guide the hammer’s head to its destination.

The only real (potential) problems here are weight, tangling, and total fuel.

Your plan already works as is. It will be painful if you miss and strike something hard, but it won't break your arm.

The handle could have a shock absorber added to help soften the impact of hitting something hard.

The rocket itself could provide enough thrust to lift you into the air and not break your arm. However i wouldn't go more than 30% so the user doesn't get faceplanted if they activate it too soon.

A Rocket-Propelled Hammer with a counter-explosive.

Rockets help provide extra force while contact releases and explosive that: A. Increases damage via explosive B. lowers the extra momentum provided by the rocket.

A regular Hammer imparts (completely arbitrary energy amounts or AE) 1AE lets say. The rocket then imparts an additional 1AE before impact it has 2AE and then the explosive goes off (before the bounce via a trigger imparting a blast that does 1AE plus the hammer momentum (2AE) to the target while reducing recoil.

6
How can I make rapid recovery from prosthetic arm surgery more plausible?
2
How to make storms that temporarily suppress electronics
12
How could you make a bullet that disappears entirely after impact (like ice maybe)?
15
How do you make a gun that shoots melee weapons and/or swords?
4
How can I make the Solar System uninhabitable?
6
'Nuke the sky' to make a rocket launch a tiny bit easier
5
Humanoid avians with six limbs, how to modify their bodyplan so that their ribcage won't constrain certain movements?