What is keeping my Terror Bird from being the size of a T. Rex?

This is a Terror Bird:

Specifically, this is Titanis one of the largest of the carnivorous Phorusrhacidae; it was perhaps 2.5 meters tall and 150 kg.

I would like a terror bird that is at least 1000 kg, but it would be even better if it were more like 5000 kg; the size of a Tyrannosaurus. Fundamentally, Tyrannosaurus is more closely related to bird than it is to extant reptiles like crocodiles. Of all the birds that we know of, the terror birds come closest to matching the physical anatomy of Tyrannosaurus; that main difference being that the birds lack the heavy tail of Tyrannosaurus.

Modern and extinct flightless birds adjust for weight by swinging the whole body farther back, making the pelvis stick back very far, and making the femur more horizontal (see image). this moves the feet further forward. This does mean the forces on the femur will be huge at the largest size so it will need to be far thicker than seen in T-rex. At the largest sizes it may not be functionally sound.

The other problem is finding something to eat, but that is a bigger problem for the larger size so I address each individually.

5000kg The only issue is what prey they attack that requires them to be that big, they will be to slow to catch smaller animals so they had better be hunting things close to their size. there just are not many animals available. elephants, hippo, and rhino are about it so you are probably restricted to Africa or parts of Asia in the modern world. During the Pleistocene you have many more options: Africa, Eurasia, and North America basically the places that had mammoth.

1000kg This much easier, depending on the time period most of the world will work. But you still want and abundance of ~1000kg prey animals, which limits your to a few places on earth. 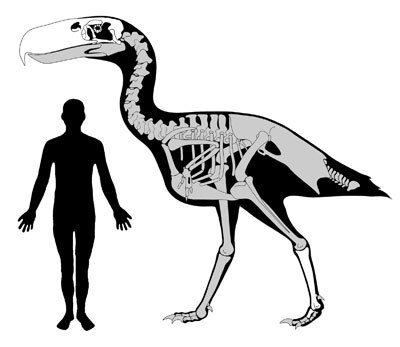 Probably it is the lack of tail for balance combined with a need for speed that limits the maximum size of these large flightless birds.

Theropod dinosaurs, the ancestor of birds, walked with their legs vertical using their tail for balance. As their descendents evolved to fly, their heavy tails became a liability and shrank to a stub. To keep their balance, the evolving birds began to crouch, with their femurs tilted back to keep their knees under their centre of gravity. They kept this position even after some had ceased to fly, and the extra strain made their femurs stronger... The dino femurs grew longer and thicker as body size increased, Chan says. But in birds, there was a “distinct plateau” between 300 and 500 kilograms, with femur length constrained by the need to keep the knee near the centre of gravity. That makes it harder to support a large body, and so it limits their size, argues Chan.

I wonder also if there is a limit to how strong a hollow femur bone can be. These flightless birds have strong bones, but they are all still hollow. Also the light skeleton reduces the mass of these birds - a giraffe of 5 meters might weigh 1000 kg (weight to height ratio = 2) but a big 3 meter ostrich weights only 150 kg (weight to height = 0.5). Good if you want to be a fast bird, but not if you are trying to achieve a weight target requested on world building stack. 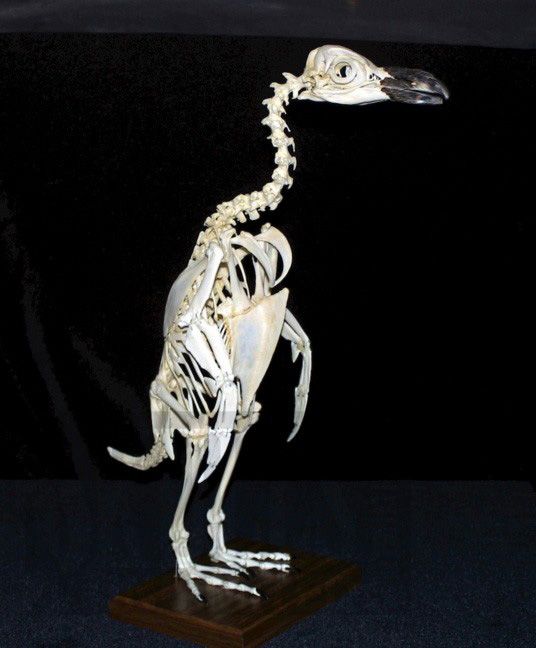 Penguins are unusually upright, with their legs set far back on their bodies. Uniquely among birds their bones are not hollow. Penguin tails, or pygostyles are very robust.

Penguins have a pygostyle, but it is quite different in shape from the standard avian pygostyle. In penguins, the element is more elongated and less flattened. Rather than being plate-like, it is almost triangular in cross-section with a flattened base. Penguins also have a very different set of tail feathers. Rather than forming a fan, penguin tail feathers are very stiff and quill-like, and stick out somewhat like the bristles of a broom. This is especially true of penguins from the genus Pygoscelis – the Linnean name Pygoscelis actually translates to “stiff tail”. These penguins are prone to be caught slouching around, partially propped up on their tail feathers. It seems that without the necessity of maintaining a “fan” of tail feathers, penguins have gone ahead and modified their pygostyle to a shape more suited to supporting themselves on land than steering in flight.

This has the makings of a large land animal: weight stacked vertically over the stable tripod of stocky legs and tail. This is a different route to bipedalism than either an ostrich or a tyrannosaur. This is a thing that can get very big - like the ground sloth Megatherium which could measure 6m and weigh 4000kg. 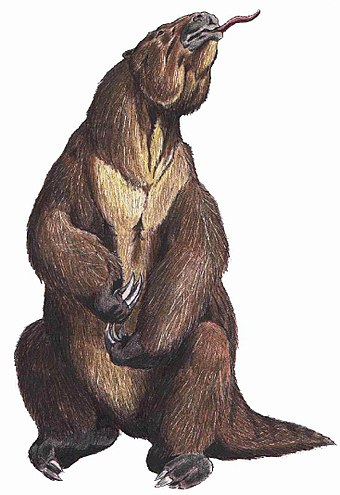 The giant terror penguin will, however, be a predator in the pattern of a tyrannosaur. Why did the Tyrannosaur need to be so big and fierce? Was it to take down and devour huge formidable prey? No - it was to intimidate smaller, fierce carnivores. A carnivore never wants a fight it might not win - any injury might prove fatal because of consequent inability to hunt and starvation. Wild dogs are tremendously efficient hunters but half of their kills are stolen from them by larger predators.

Like T.Rex (may have been!) the massive terror penguin is a scavenger and kill stealer. No other predators have a chance against it and they leave when it arrives, carrying off what they can. Its bulky body offers no vulnerable spots within reach, and the bulk serves to anchor a long snakelike neck and sharp slashing beak. Because of its diet of carrion, its head will be bald, like a marabou stork or vulture. The long neck also allows it to eat without actually getting down prone on the ground, and the size of the bird means it can eat the entire kill itself.

Large predators such as crocodiles use ambush. Being living dinosaurs themselves, that means it is a proven method.

Now the terror birds face the challenge of Hot Blooded species; our rate of calories expenditure is way higher than a reptile. Cold blooded ambushers can snack once and sleep all week.

For a hot blooded hunter, this places a larger pressure on your ecosystem. Now your Apex predator is feeding more than once per week.

So your deciding factor is; what changes are needed in your prey to support your predator?

For once, increased birth rate. Maybe they are faster, but migration trips to and fro foraging zones, expose them to the predators. Maybe it is an exclusive prey that lacks any other predators. Architeuthis dux, AKA papa squid falls in this category. Only sperm & pilot whales munch on them. Other reason to favor a large size is cold weather, in turn requires a large predator to take them down. Polar bears already rock 700kg, so it isn't impossible to reach 1000kg. (Add more feathers for the cold!)

Over 5,000 Kg, you method of transportation depends on the soil. You will go ankle deep in mud, totally sink on snow to say nothing of making you too vulnerable to overheating.

The dealbreaker is calories.

Make the terror birds aggressive herbivores living in a herd:

All large land mammals are aggressive :

Except for the rhinoceros, they live in herds, are fiercely territorial, (yup cute dumbo and funny hippo will rip you and your car to shreds), and don't forget that giraffes have horns and a single kick of a giraffe's hind legs can split a lion's skull in 2!

Once they have these characteristics, there is absolutely no reason they can't become as heavy as:

Due to your demand for specifics, I'll have to split my answer into two:

1,000 kg - This is at least semi-plausible. This thing would chew through even the largest predators in its habitat, being 4x the weight of an adult male African lion. It would be mostly confined to Africa and south Asia, subsisting mostly on elephants, rhinos, and hippos, while occasionally snacking on smaller creatures such as zebras, wildebeest, antelope, and sika.

5,000 kg - No matter where in the world you put this thing (unless it had gills and could live in the ocean and hunt whales) it would starve.

Not the answer you're looking for? Browse other questions tagged reality-check fauna .

3
Could birds evolve to become similar sizes to large theropods?
6
How Tall Can Flightless Birds Plausibly Get?

19
How long would it take to terraform a lifeless but somewhat earthlike planet using bacteria, fungus, seeds and eggs?
6
Would a bird/marsupial make a good pack animal?
15
Would Elephant Bird Light Cavalry be feasible?
9
Evolution bottleneck event leading to color changing humans
31
A pack of velociraptors in a modern ecosystem, that would be pretty horrible, right?
3
How to form a huge natural plateau with a slope?
6
What is the minimum viable ecological pyramid a terrafoming project would introduce to world with no life to make it suitable for humans?
3
How could very large (but not that large vehicles) be used in combat?