Why aren't cities developed in circular area? Just as the grid system of city planning circular system can also be opted. What will be the pros and cons of circular cities?

(Assume the terrain to be plane , new land and just you and your ideas)

True curves are relatively difficult to construct, especially over large distances. Obviously you can't take a huge compass and draw a city-sized circle on the ground, so you have to make a lot of measurements and everything needs to be very precise or it falls out of shape. On the other hand, straight lines are comparatively easy to work with.

However, radial cities don't necessarily have to be circular: they could take the shape of a polygon with many sides, with streets radiating out from the center, and avenues parallel to each side of the outer perimeter. This sort of city planning was popular during the Early Modern period, in conjunction with a style of fortification called "star forts". For instance, here's a map of Palmanova, Italy ca. 1597: 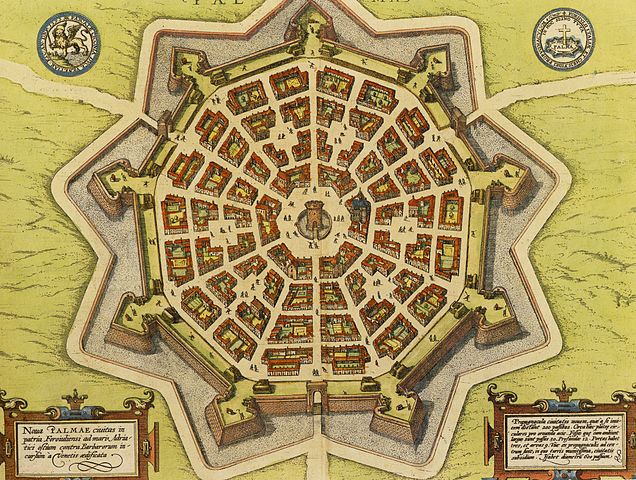 As you can see, the city is laid out in concentric rings, although those rings are nonagons (nine-sided polygons) rather than perfect circles. Polygonal ring streets are easier to lay out and easier to fit buildings into, while in turn being easier to fit into the structure of the fortress wall. (It should be noted that many cities with such walls had perfectly ordinary rectangular street grids, or irregular streets. They just cut them off wherever they needed to build walls.) 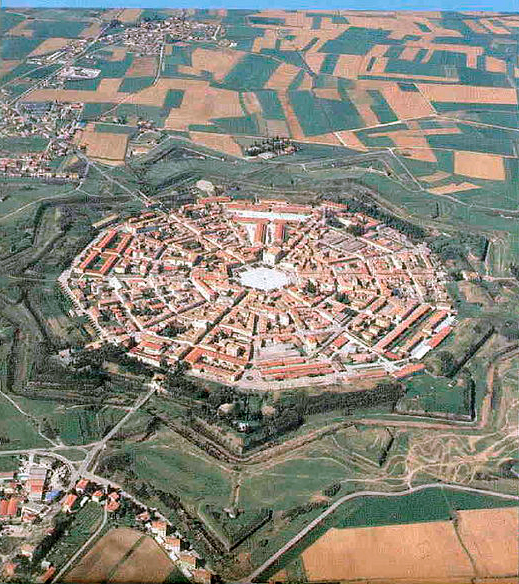 Palmanova, a town and comune in northeastern Italy; founded in 1593. (Photograph from Wikimedia; CC0 license.) 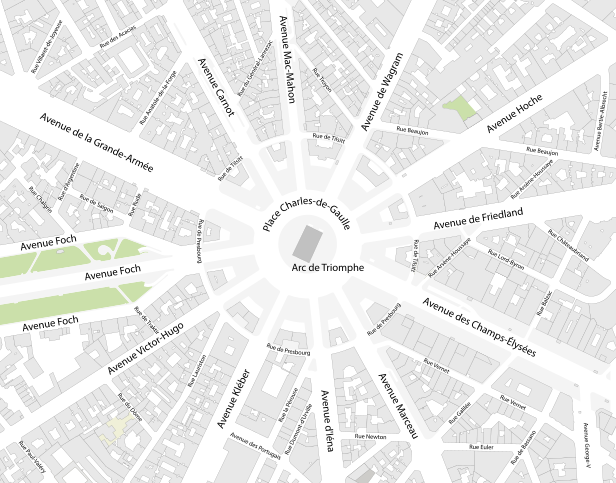 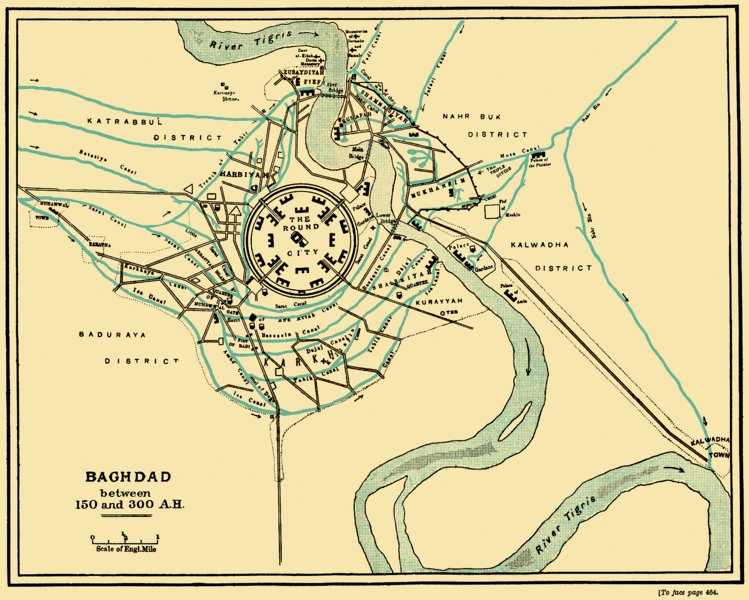 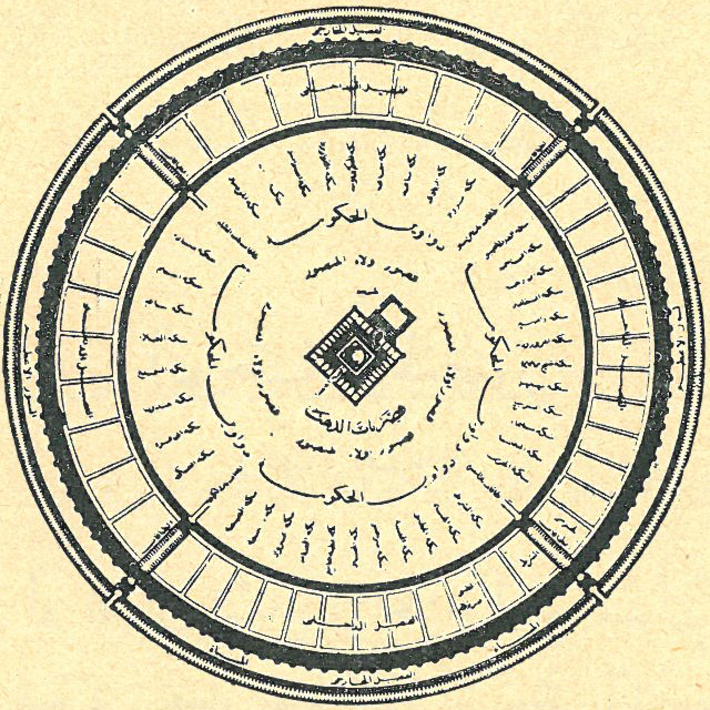 Plan of the Round City of Baghdad, from Tareekh Al-Islam Al-Musawwar (Ilustrated history of Islam) by Umar Farrukh, Lebanon, 1964. Public domain. 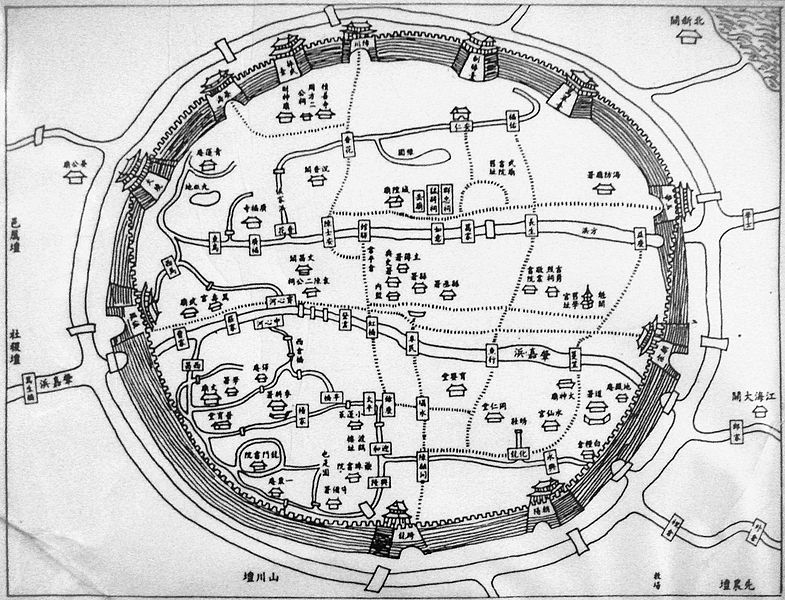 Map of the Old City of Shanghai, by user World Imaging. Licensed under CC BY-SA 3.0; from Wikimedia.

Because it doesn't make sense to. There are no perfect circles in nature and any irregular shape will be better filled with a grid system. It's also much easier to expand in any direction. Circular is constrained to expanding in all directions.

Also in engineering it is generally easier to engineer a straight line than a curve, importantly it is also easier to calculate areas, stresses etc, this holds true for most of our engineering. Hence many things we make that looked curved are actually just a curved facade built on mostly straight lines.

Worth mentioning is transport, straight lines are preferable for many reasons.

Imagine the difference in difficulty calculating a 1/4 acre section with curves rather than straight lines. And the total difference in shape of the quarter acre as you progressed from inner to outer.

The most important reason to use straight lines is it's much CHEAPER.

A thing I would add to the other answers:

The vast majority of cities grow organically. Meaning they expand, when needed, in any direction possible.

As Kilisi pointed out in his answer, it is significantly simpler to build somewhat rectangular than circular. You need to put a lot more effort and knowledge into it. And since most cities were not designed from inception they grew somewhat randomly.

People were just like "I am gonna build a house next to the other house". And that several thousand times over decades and centuries. Why would you expect that to form a circular shape?

The reason it is mostly based on a grid as it can simply be scaled into any direction. It is a lot easier to grow. A circle would always have to expand as a circle. That is extremely unflexible.

Especially if you also want to keep it somewhat symmetrical in there. Just imagine the same circular city passing through the ages. In the very beginning there might not even have been plumbing. And now it would need to have that, electricity and internet.

Unless someone would supervise every single construction work that was to be done over the centuries your city will never stay somewhat symmetrically circular.

They are nice to look at structure-wise. Not really an objective bonus, though.

Another thing they bring is defense. Since a circle has a minimal outline you need less wall per area than a rectangular city would need. Unfortunately, that is completely pointless in modern times and would more likely be a defense catastrophy, since the introduction of long range artillery, bombers, etc.. Nobody could escape in a walled city, especially not if the wall is minimized and has a few entrance/exit points as possible.

There are some cities that are developed in a circular area. In developed countries, a lot of city layouts follow the Concentric Zone Model. In this model, the central business district, which is the city's center and provides business and public services, is circular. Outer rings surround the city and provide consumer services and housing. While the city itself may follow a square layout of buildings and streets, the general shape of these rings are round. So to answer your question, yes, a lot of cities are circular in shape, although that doesn't mean they have a circular layout.

The circle is the shape with the largest area for a given length of circumference. Thus, if you want to erect city walls, a circular shape, or an approximate circular shape gives you the most city for your wall.

Extending a circular city is much harder, i.e. more expensive, than expaning an irregular-shaped city, since you need to build a full, bigger circle.

A rectangular is self-similar when divided. If you divide your city in quarters, then each quarter of your rectangular city will be a rectangle. This is most evident in the way the Romans built their legionary camps. Such Castra are the seed of many a European city.

The strict grid-like cities are an invention of modern times. If you take a look at remaining medieval city centers, e.g. here is the inner district of Regensburg, which has largely retained its medieval layout, you will see the layout is pretty chaotic, compared to modern cities.

Real world cities will in most cases assume some irregular shape, due to

Some circle-ish cities do exist - take Beijing for example: 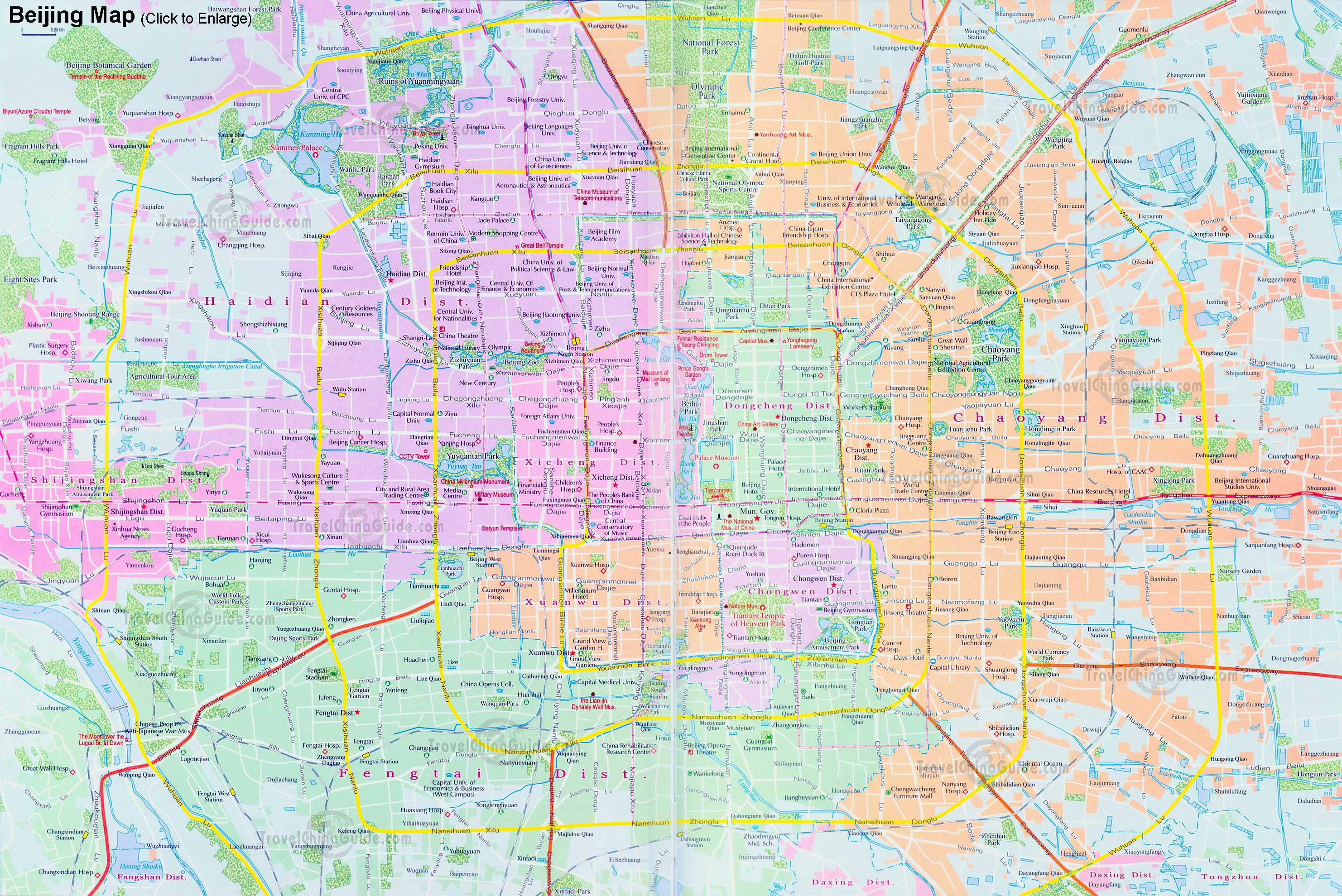 It has Ring Roads, to enable easier travel around the city. However it is still based off a square grid pattern, for the reasons people mentioned earlier.

But as you can see Beijing did expand in a somewhat-circular fashion. Some of this can be attributed to strict central planning for the government.

The original EPCOT Plan by Walt Disney (not the amusement park, the fully functional city) was a flower design where the city's buisness and commercial areas were in a central circle and the residential areas were smaller connected circles like petals on a flower... at various points, public transportation in the form of a train of some sort would circle the main hub and make connections to transport going into the center city and out to various residential areas. Vehicular trans power in the central area was to be entirely through tunnels leaving the open air portions of the city center were entirely pedestrian with the public transport being elevate train lines.

After reading all the answers above .... I recognize that most of them are saying that circular township would be expensive than grid or irregular township

But I would remind you all that when the first civilization should have been set up it would also be too expensive.

The point is that if earlier people started building circular township we (HUMANS) have bring in technology to it and we would have made it cheaper .

If you or anyone of you understand my point please upvote it and comment for more.

Not the answer you're looking for? Browse other questions tagged architecture or ask your own question.

25
Is it viable to build a city with a circle based architecture?
1
Mozart city proposal

12
How would antigravity change the design of cities and buildings?
6
City in the wake of the Yggdrasil: Engineering Considerations
12
How would a city of AI be built?
7
Floating City for 1 billion people
17
How big were medieval cities?
2
Building a small town with zero funding: first steps
0
What would architecture and cities be like in a world were everyone was shrunk to the size of a mouse?