Can a house cut off from the world still have water for a short time?

Related to this question a bit, the house I'm talking about was swallowed into another dimension along with parts of its garden. The house itself stays completely intact, but the piping is cut off, obviously.

I assume electricity will be gone immediately, but what about water? If you were to try and use the sinks, could you still get some water before it goes completely dry? Does the water get stored somewhere perhaps? And if yes, how much approximately?

I heard some countries have boilers in their bathroom that preheat the water before they can use it for their shower, as in, it's installed right in their bathrooms. Would those have some usable water for the residents?

Its been pointed out a few times in the comments that local uses of words differ significantly,, apologies for any confusion on my part in that; I've edited this answer and tried to keep the working as open as possible to reduce any issues from this

Water Pressure comes from Mains pressure. This is generated by the house being lower in altitude then the water supply, either a large water tower water is pumped up to it and then gravity does the work of moving it to your homes. If you removed a house and its on-property pipes from the grid, the house itself would have a higher pressure within the pipes than the surrounding pipe-less environment so mains pressure wouldn't work. however as Josh King noted in the comments most municipalities require Back Flow Prevention Valves, meaning the water can only go into the house, stopping the risk of potentially contaminated water flowing from the house back into the mains. this would mean that some water would be stored in the pipes however it would be very tricky to access without a fair amount of plumbing knowledge.

A lot of houses that have the room have hot water boilers or hot water tanks. where water is heated and stored for the use in showers baths and the hot water tap. This is actually the norm in the UK: the boiler holds a large amount of water at about 60-80 degrees Celsius, which is then mixed with cold water to give the showers and baths some degree of temperature control. These tanks vary in size dramatically but usually are between 60 and 180 litres. the exceptions to this rule is in small properties and flats, where the space taken up by the equipment is at a premium. in those circumstances they often install heating elements that heat up the cold mains feed water as they pass to the shower or bath.

Some older houses have cold water expansion tanks which give the property pressure. This is common in locations where either the mains pressure is too low or too high: if it's too low, then water towers are installed as in L.Dutch's answer; if it's too high then an expansion tank is installed to offer a more regulated pressure. This was common in the UK about 20 years ago at least.

All toilets do have water cisterns for the flush. This is often about 5 litres. It may not seem like a huge amount but it can be drained without ever touching the toilet bowl, although I'd still recommend boiling and filtering before drinking.

It's also not uncommon these days for houses with gardens to collect rain water runoff from roofs into water butts, so this could be another source.

There would also be water in radiators if fitted however this would not be safe for drinking, in theory however it could be made safe, easiest way to do this would be a reverse osmosis device if you happened to have one lying around, but apart from that this should not be considered useful water.

Its also not unheard for houses to have Photo-voltaic Solar Panels on their roofs so power may still work... providing your world has a sun. It may not be common yet but it's a definite possibility.

Gosh, this is really dependant on the house. My family owns a farm, and we have a well...and that answer would depend on how far DOWN the interdimensional rift goes, because the well is pretty close to the house, so it would be included, it's just a matter of how far down it goes.

A place in the country, or in a quirky neighborhood is more likely to have an alt water source, such as:

I looked at the original question and frankly, if the house is just CUT away, including the plumbing, then there will be issues in OUR dimension.

See, mainlines can run through front yards, and then have lines off that, which means that in reality, where the house has disappeared from, there's bound to be problems. Even if things sync up exactly, a pipe can be several feet to the left or right if you cut out the middle where the house is, so it might not match up.

In other words, there's a plumbing problem everywhere....and outside of reality there's not enough pressure in the lines once they are effectively cut, to give you any water. Maybe for a second, but that's it. In the U.S. there's a water heater, and those sometimes have water stored in--depends on the size--they can be 80 gallons, they can be 25. About 50 is the average. Tapping it could be difficult depending on the system.

UNLESS--introducing interdimensional plumbing AND electric! You can't get wifi, (or maybe you CAN!) but you do get intermittent plumbing and electric. Anything with a hard line in or out works, kind of.

Because you're bending space-time, the house is really still there, it's just in a pocket dimension. Maybe nothing organic can get through, but objects and energy CAN. Which opens up a whole world of possibilities...

It can be, yes. There are several cases in which water is not directly supplied from the outside. 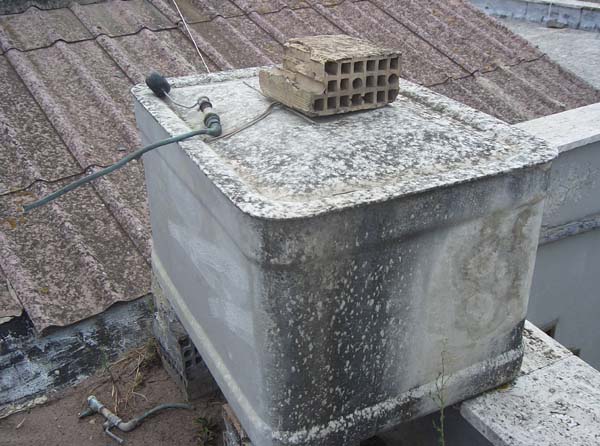 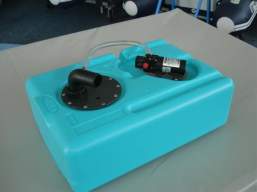 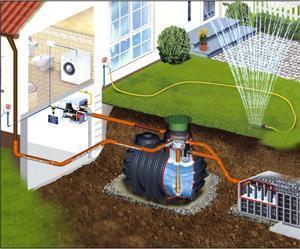 In all the above examples, there would be no immediate disruption. Water will be available as long as the storage is not empty.

It's fairly common here (Ireland) to have a tank in the attic which feeds the upstairs water and the downstairs hot water tap. But the downstairs cold water tap, and the dishwasher/washing machine are fed from the mains.

Therefore you'd lose your downstairs cold & dishwasher/washing machine. You also wouldn't be able to refill the tank, so for upstairs you'd have whatever remains in the tank.

If the house gets it's water from a pipe connected to a main water line running under the street, then no.

If the house has a cistern on the side of the house fed by gutters, then yes the taps would work after you started up the gas generator you keep in the garage (since if you have a cistern, you're likely to be more self-reliant than most suburbanites and urbanites).

Header tanks should stay full after the mains are cut and the water still be readily accessible, it will gravity feed into the house. Most hot water cylinders will also stay full but getting the water out without the electric pump (either in the house or from the mains) will be more awkward due to the position of the dump valves.

Assuming you're looking for sources of water:

Where I live, most houses have central heating. (and a lot have boilers but that's already in another answer) The central heating is a closed system where the heat is transported with water. For water you could tap into that.

Also your toilet tank will have clean flushing water, about 7 liters of it. (I drilled in my water-pipes once. The knowledge that you have only 1 flush left...).

I also have a well (50' deep, which is about the border between what is considered a deep vs shallow well). Water is pumped to a large (1500 gallons) storage tank. Then it is pumped to a large (80 gallons?) pressure tank. As others have said, the pressure tank works without electricity but it will not refill. The large storage tank can produce water with a bit of pressure, which will lessen as the tank empties.

I don't but a lot of people have generators or a backup battery system for the express purpose of running their well pumps in the case of a power outage.

My home has roughly 10,000 litres of water in tanks inside the building.

It depends on where the home is from. We rely on trucked water, thus the tanks.

Not the answer you're looking for? Browse other questions tagged reality-check water or ask your own question.

7
How could people figure out that parts of the earth are missing?

29
How would the world be different if ice was denser than water?
5
Halfday planetary scan: what do you get?
48
(How) can I provide reliable water sources in a world of flying islands?
3
Would it be possible to have fresh water in a world where there was a major volcanic eruption which destroyed all civilisation apart from one city?
4
How realistic are my shelter plans?
4
Could a terrestrial planet have water for a core?
11
Is there enough fresh water in the world to eradicate the drinking water crisis?
25
How could a planet have most of its water in the atmosphere?