How to generate powerful cyclonic storms in an ocean basin

I have a region on a planet with identical parameters to Earth but different landmasses that is rather similar to the southern ocean on Earth.

There is a single piece of land around the size of the Pacific Northwest that sticks down into the 50 S latitudes. To the west of it but beneath the 60 S parallel, there is a continent twice the size of Greenland generally extending south and fully glaciated. There is no other land south of the 45th parallel.

I'd like this ocean to generate cyclonic storms stronger than the ones in our own Southern Ocean. Will it already do that or are there any other changes to the distribution of land and water and other things that aren't like orbital distance and mass that I can do to increase the strength of low pressure systems forming in this ocean that will impact the land? 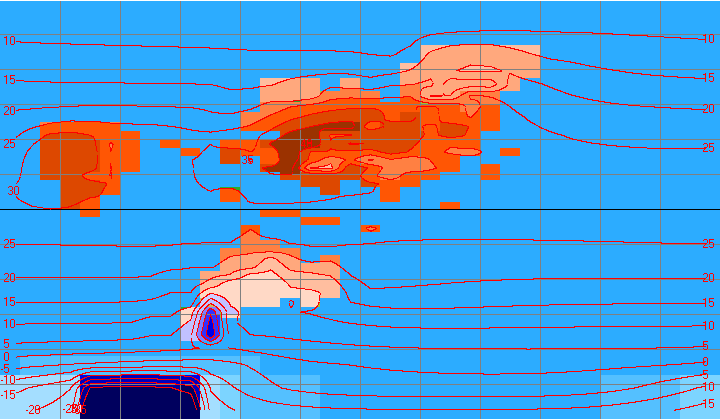 This is a map of southern winter average temperatures for reference.

If you want a strong Southern ocean:

If you don't you'll get the equivalent of the northern ocean.

Going off on a tangent it looks like your wanting some extreme climate and variability.

If your after storms, the most violent storm periods in earth (geologically speaking) form when a clean band of ocean forms through the tropics. This causes the warm water to heat year round increasing the frequency/strength of strong weather. It also has the nice effect of caging in the northern/southern oceans own currents concentrating their own strength.

Also be aware that this kind of event tends to throw the oceanic ecosystems into disarray, as cooler water species cannot cross the equator easily, hot water is much less oxygenated and tends to create massive dead zones, and depending on the oceans recent history, it can release copious amounts of green house gases strengthening global warming trends. Needless to say there will be no reliable fishing in such a world.

Take a look at the Gondwana/Lurasia super-continent split for a recent example in earth history.

Conversely if you get a continent or near perfect large continent linking north to south it diverts most ocean currents warming the poles and cooling the tropics, producing an overall more stable climate. You can still get massive storms particularly if you have a giant pacific ocean/indian ocean style where the ocean currents are mostly forced to cycle. Couple that with a giant mountain range relatively close to the coastline, this will trap massive weather events along the coast causing massive amounts of rain, and flooding. While turning the rest of the continent into a relatively barren and unforgiving desert. Take a look at Australia or India for an example.

Also do not forget other events such as volcanism, or world forests for playing hell with the weather.

Given the parameters that you've given, it is very likely that the storms generated in the southern hemisphere would be quite stronger than what exists in our world, and also likely that the South Pole, in the absence of any landmass, might end up being covered by a permanent storm system.

I draw a parallel with the recent discovery on Jupiter's pole, showing a massive storm orbited by smaller storms. While Jupiter isn't Earth-like, the physical laws governing the movement of a fluid, like an atmosphere, are the same no matter what your atmosphere is made of.

Thus, I believe that in your setting, the South Pole would be covered by a giant permanent storm system, fueled and maintained by sea currents, jet streams and the rotation of the planet, that would generate side storm that would wreak havoc on your Greenland and the south shores of the other landmass.

Given how 'thin', so to speak, the two landmasses you described are, this leaves a lot of open seas for storm systems to develop and acquire energy before they make landfall.

Not the answer you're looking for? Browse other questions tagged hard-science climate weather or ask your own question.

2
How would tectonics behave on a two continent planet?
5
How would a large arctic mountain range affect the weather?
5
Antarctic Climate on Greenhouse Earth
7
The World's a Jungle Again. Would Doldrums Blow the Global Air?
3
Weather Impacted By Extreme Magical Effect (Heat)
9
How, and for how long, could a permanent storm be maintained on Earth by a stationary mega-structure?
4
Climate of a continent in an endless sea
19
I want ten Earth-years long day on my planet. Can I have it?
11
Terra Australis: How can I minimize the effects of its existence on the climate in the rest of the world?