Would weights in clothing be an adequate way to compensate for low gravity?

Would heavier clothing solve the problem of bone and muscle loss in Martian gravity? It doesn't have to be a perfect solution, I just don't want my Martian colonists to be total wimps compared to Earthlings.

Your skeletal muscles are not the most important muscles in your body. That would be your heart. Unless you can add weights your blood, then your heart will get weaker as you spend more time on Mars. The amount of force it takes to pump blood from your heart to your head depends on the hydrostatic force of blood at that vertical distance; so a this required force lowers, your heart gets weaker.

This same argument would apply to any internal muscular structure in your body, and possibly some external ones as well. There are some things you just can't weight.

As a second reason, the reasons for astronaut's bone density loss in space is not well understood. This mass loss is caused by calcium being removed from the bones into the blood, and it starts days after getting into space. Now, we don't really know if an extended stay on Mars at ~30% gravity will have the same effect, but we could probably assume that there will be some sort of effect.

So in conclusion, even if you weighed your clothes perfectly to simulate the musculo-skeletal effect of being on Earth, your internal muscles, in particular your heart, will still be weaker; and your bones may still lose calcium due to some unknown effect of lowered gravity.

Runners on Earth use weights for strength training

In fact, it's exactly what you're asking about. Joggers and runners use weights to increase their strength above what our local gravity can give them. I've personally used weights like these: 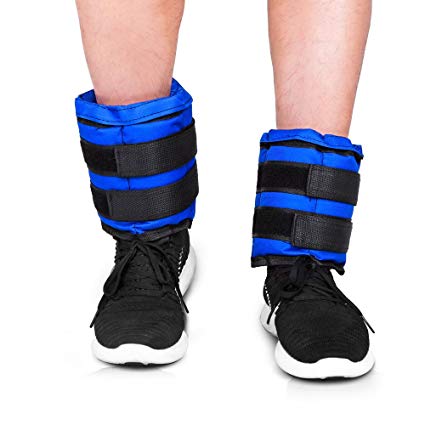 Wrist weights and even torso weights are also used.

So, yes, certainly. Weights can be used to compensate for the loss of muscle due to lower gravity just as we use them to increase muscle in our native gravity.

But it would be uncomfortable to use them all the time. And while weights like this can compensate for muscle loss, they can't compensate for your body's natural adaptation of heart, lung, and other internal organs to the lower gravity. Over time, no matter what you do, you will eventually become unable to return to Earth for long periods of time.1

1 You know, I say this, and lots of people will be willing to believe it... but humanity is remarkably adaptable. I wonder, really, if the 10th generation martians would actually have massive difficulties returning to Earth. I can see the point with full weighlessness, but we really are good at adapting. I'm not willing to rule it out — at least not completely.

weighted clothing may help some with your skeletal muscles but would not mitigate the effects on your circulatory system there however could be a few ways to change that when dealing with earth standard gravity your martians could wear extremely tight clothing on lower extremities for working periods kind of like a g-suit fighter pilots wear https://en.wikipedia.org/wiki/G-suit

the other options is to as part of training for the trip complete a work out every day under increased gravity maybe in some type of turbine or centrifugal force machine or maybe have a space station just for the training. I think using a combination of the two along with the weighted clothing your martians may still experience some fatigue but it should be manageable.

It might help somewhat, but there are a lot of biological functions inside your body that won't like the low gravity. If we ignore those than yes, more weight would make them stronger, unlike more gravity which would hurt their innards and stuff.

I think using thin, but heavy weights on all pants and torso clothing, including the head as well, would help to mitigate the difference in gravity. For the internal organs, this would need to be investigated and protocols set up, either some type of physical workout or maybe drug therapy as an intervention to prevent or at least slow down the effects on the heart and other internal body organs.

However, for now, I think most important of all is age of the astronauts. If we are going to send people to live for long periods on Mars, then start with people over 45 or 50, maybe even 60. You should eliminate the possibility of pregnancy until we learn more. Using older people also reduces risk to younger people, who may end up with permanent health damage, and end their life prematurely. An older person, usually has lived thru the years of starting and raising a family, so they would present with less risk to long term survival issues. After enough health data has been taken, then the age for living on Mars may be adjusted down, and couples could even have families on Mars. But first, see what the health risk is, before sending young couples and having their life cut short because of health issues.

3
Would a very heterogeneous planet be spherical?
35
Why are low gravity humans depicted as TALL?
4
Getting around the effects of low Mars gravity
2
Would humanoids from high gravity planets be smaller than us?
7
Would lower gravity lead to earlier spaceflight?
1
Controlling personal gravity – how would it affect a warrior's combat style?
5
Low gravity space shipyard vs micro gravity shipyard
3
How would colonists on Mars effectively move about with the lower gravity?
4
Would less gravity allow for larger flying creatures (like dragons)