How can I ride a balloon in a hurricane? [closed]

Like the famous Annie Edson Taylor who went off Niagara Falls in a barrel. I would like to be the first to ride out in a hurricane at least from the inside out in the air in an unpowered craft. Could a small blimp or balloon be built strong enough and hang a person from the bottom in a capsule or from inside the balloon/blimp to ride out a hurricane?

Here is a related question dealing with the sort of unpowered craft I'm thinking of: Could this bubble float with a person inside?

You'll want to model your flight on the HURR-B weather balloon which is designed to be launched within the eye of a hurricane. Once aloft, and assuming it doesn't become punctured by debris, it will spin around the eye wall until rises above the storm. 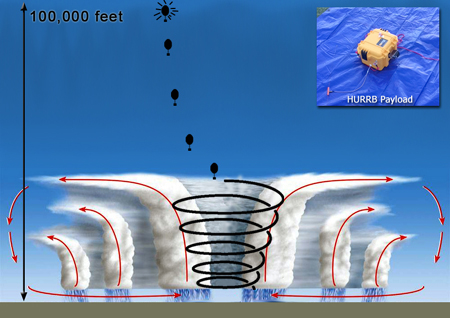 You probably won't want to go all the way up to 100,000 feet! But you'll certainly want to clear the storm's upper level winds, which look like they will only bring you out to the edge and then drive you back down again.

Since you don't ask about getting back safely, I could just leave it at that! But assuming you will probably want to get back in at least one piece, I'd suggest that your capsule be kitted out with a parachute and a flotation device in case you end up out at sea.

Not the answer you're looking for? Browse other questions tagged science-based weather materials airships or ask your own question.

19
Could this bubble float with a person inside?

15
What would we need to stop a hurricane?
4
Hurricane size vs planet rotation speed
4
Will this anti-gravity airship balloon give me a working vacuum airship?
6
Hurricane Adaptation for smaller creatures and plants
3
How big of a fire do I need to create a hurricane?
7
How to create an artificial hurricane?
14
How to ride a fish?
10
Hurricane-force winds or gentle breezes in an O'Neill Cylinder?